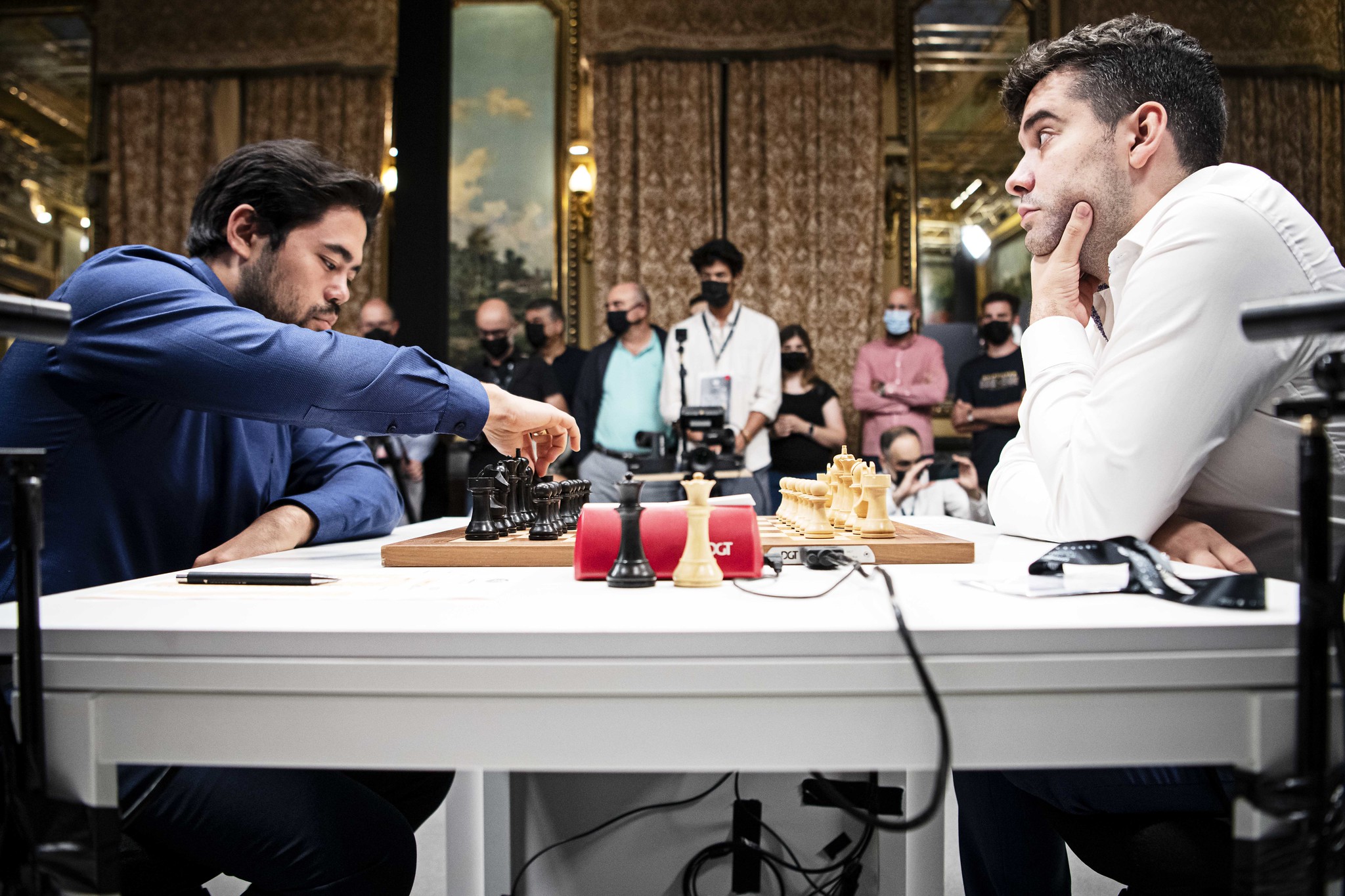 Time is running out for the field to catch up with Ian Nepomniachtchi, and Magnus Carlsen’s last challenger will be the first player to win back-to-back Candidates Tournaments. Whether Carlsen will be willing to face him in another world championship match remains to be seen, but there is little doubt that he will cash in half a point in the remaining two rounds. Even if he fails to do so somehow (after having gone undefeated for the first twelve rounds), his two remaining chasers, Hikaru Nakamura and Ding Liren have to win both of their games to push things to a tiebreak.

In fact, this is the main source of intrigue remaining at this year’s Candidates: will second place matter? If Carlsen does abdicate, the winner of this event will face the runner-up in the next world championship match. With no confirmation about Magnus’ intentions, the players have taken very different approaches. Some have gone all-out to try and catch up with first place, while others opted to consolidate and fight on for second place. Only time will tell who’s got it right.

At 15:07, Ian Nepomniachtchi and Hikaru Nakamura shook hands for the second time. It was the quickest draw at the Candidates, an infamous position that emerges from the Berlin Defense when White doesn’t want to fight for a full point. Here’s what it looks like:

What can you do as a Berlin player playing with the Black pieces when your opponent really wants a draw? Not much. In the end, Nakamura made the pragmatic decision: claim a valuable half-point from the tournament leader and stay in the fight for second place. After Ding Liren’s spectacular defeat, it seemed like the correct choice.

The Chinese and Fabiano Caruana went all-out in the chase for first place, and both faltered while trying to do so. Though it will be all for nothing if Carlsen still decides to play, Nakamura’s probably making all the right moves in terms of expected value.

Somehow, Nakamura produced a recap video longer than the actual game, shown below.

Radjabov, destroyer of hopes, shuts the door on Ding Liren

Ding Liren was on fire: Radjabov extinguished him. Though the Azerbaijani player will not win this event, his cautious and reserved strategy is starting to bear fruit, and those among us (including yours truly) who began to question whether he deserved his spot in this event have been proven wrong.

Every tiny bit of overreach, every dubious gamble was punished by Radjabov, who began to mercilessly pick up the points dropped by his overambitious opponents who keep stretching and stretching for a victory. With this result, he has now tied for fourth place and half a point behind second: an incredible statistic considering how his tournament has begun.

Ding Liren has won three games in a row heading into this round, two of them with the Black pieces, no less. Somehow, his play with White let him down again, and things began to go wrong as early as the opening. It was a tame-looking Nimzo-Indian until Radjabov played the provocative 8. – Na6: Ding couldn’t resist the bait and gave up the bishop pair in exchange for some structural damage and imbalance. He then pushed up his queenside pawns into the emerging void, but his king ended up stuck in the middle.

Radjabov swiftly denied his opponent the opportunity to put his king in safety with 18. – Qc8, a move that set up a tactical shot on the h3 pawn. Ding Liren tried to castle by hand, playing f3 to slowly evacuate his king, but it was too late: 21. – Rxe3, a brutal tactical shot, lured his Majesty out to the open, and he was swiftly surrounded, and the Chinese GM resigned just a couple of moves later, his dreams of catching up to Nepo dashed.

It was an exciting game in a sideline of the anti-Berlin where Rapport mounted a ferocious assault on the kingside (while both kings were tucked away safely on the other side of the board) and managed to push his e-pawn to promotion. Still, the extra queen was short-lived, and the emerging position turned out to be a draw.

Not even the complications of time trouble could knock the game off its course, even though the Hungarian GM dropped a pawn he could have kept on the board as he approached the 40th move. Having gained that precious extra hour, he calmly steered the game towards a draw: once the queens were off the board, the ensuing rook endgame was elementary for players of this caliber.

With this result, Caruana is now tied for fourth in the standings with Radjabov, half a point behind Ding Liren and Nakamura, meaning even second place is starting to get out of sight for the American who’s had such an incredible start to this tournament.

First, it was move 27. Rf2, which gave away the edge because it kept the White king on a vulnerable square. Alireza remained an obliging host, and got into trouble again with 28. Nf6, a suboptimal retreating move. This time, Duda finally moved his king to h1 and built up a big advantage once more, only to throw it all away on move 37 with Rxf7, a move that allowed for a forced simplification sequence and one that transformed the position into a theoretical draw. Ultimately, despite Alireza’s best efforts, the players split the points.

First, it was 27. Rf2 that gave away the edge because it kept the White king on a vulnerable square. Alireza continued to be an obliging host, though and got into trouble again with 28. Nf6, a suboptimal retreating move. This time, Duda finally moved his king to h1 and built up a big advantage once more, only to throw it all away on move 37 with Rxf7, a move that allowed for a forced simplification sequence and one that transformed the position into a theoretical draw. Ultimately, despite Alireza’s best efforts, the players split the points.

Candidates Tournament 2022 – standings and round 13 matchups

Will there be a tiebreaker match for second place? That is the big question as we head into the last round. For the first time in the history of the Candidates Tournament, the first place was meant to be decided by a tiebreaker match in case of two or more players having an even score instead of using secondary or tertiary scores to determine the winner of this all-important event.

But what if Magnus Carlsen actually decides against playing? In this case, second place matters a lot since the runner-up will face the tournament winner in a 14-game match to determine the next world champion. However, what if multiple players are tied in score during the second place? There are no rules in place for this specific scenario. The players have voiced their preference for a tiebreaker match in this case—whether FIDE will listen remains to be seen.

Nepo only needs half a point to clinch his victory, and he will have ample opportunities to steer the game in that direction with the White pieces. Is this a must-win game for Rapport, who hasn’t had a strong performance here and has nothing left to play for? Sporting integrity, plus the way he’s lost his first game against Nepo would suggest that he’ll bring his usual combative style, raging against the dying of the light in Madrid. Whether he’ll even get the opportunity to do so remains to be seen.

Nakamura made a calculated decision to accept the half-point against Nepo: now, wielding the White pieces against one of the less-impressive players in this field, he will have to go for the jugular. Duda’s been an obliging opponent, missing clear-cut opportunities against Rapport and Firouzja and generally failing to deal with direct attacks on his king. The blueprint is there – no doubt Hikaru has studied it.

Is Firouzja even trying anymore? Marathon late-night bullet sessions, dubious pawn thrusts and losing positions, 4.5 points after 12 rounds: all this paints the picture of a young and disappointed Frenchman who’s somewhat checked out. Ding Liren’s quest for a miracle is almost surely over after his loss to Radjabov, but he’s scored impressive wins with the Black pieces for every shock defeat with White at this event – and Alireza will no doubt give him the chance to do so again, and possibly keep his chances alive heading into the final round.

Who would have expected Radjabov to leapfrog Caruana by the time Round 13 rolled around? Caruana had such an explosive start and seemed like Nepo’s only real challenger, however, all the risks he took in the event’s second half backfired spectacularly. Meanwhile, Radjabov was solid and sturdy, if not particularly impressive, and he kept crushing those who underestimated him and pushed too far for a win. He now has an outside chance of finishing second – one has to wonder whether he’ll go for a more aggressive approach with the White pieces for once or just absorb the pressure brought by Caruana.