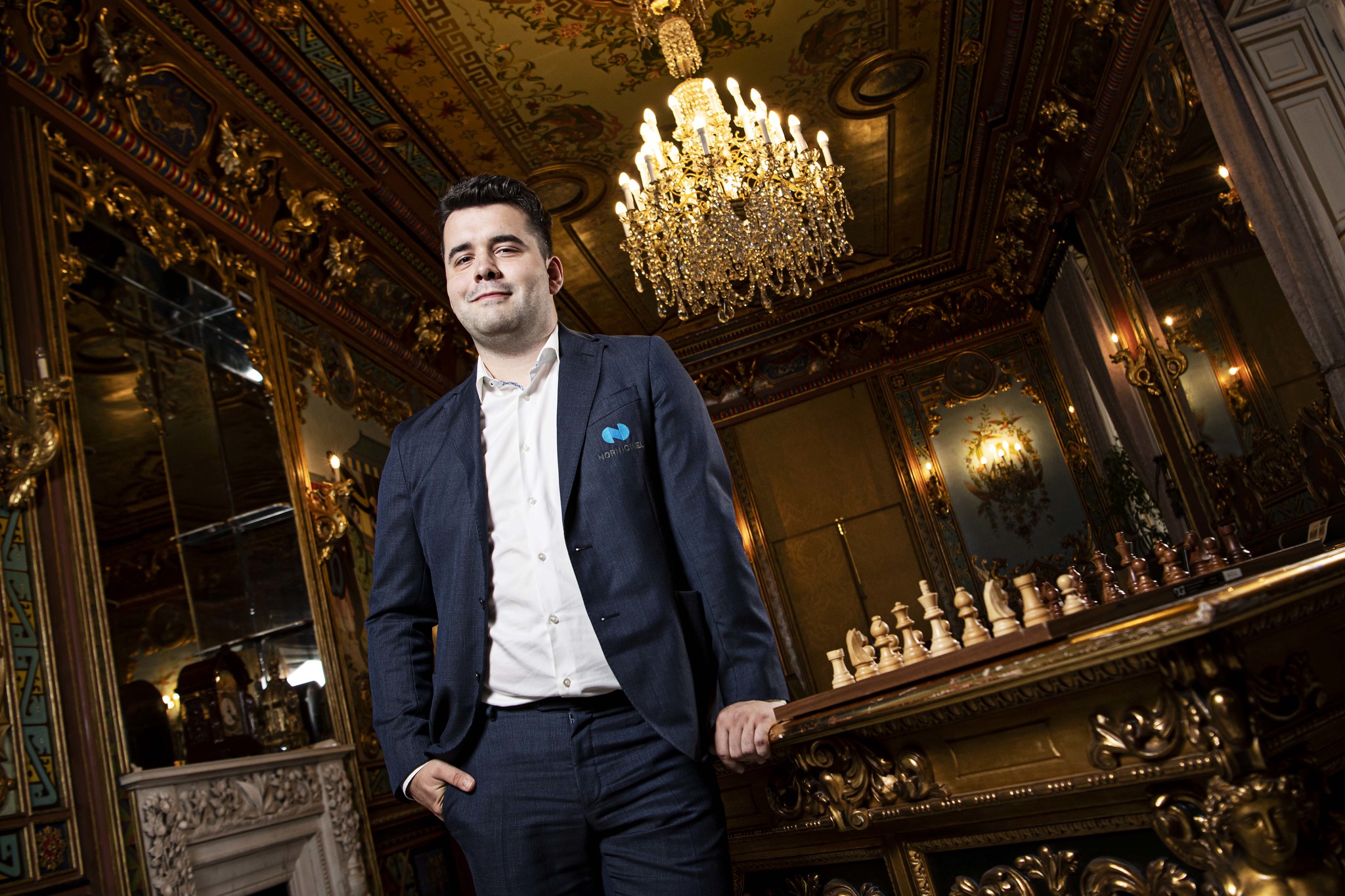 Magnus Carlsen’s previous challenger has swiftly reminded chess fans why he earned his shot against the world champion. Ian Nepomniachtchi has beaten another of the pre-tournament favorites, establishing himself as the clear frontrunner at the 2022 FIDE Candidates Tournament after Fabiano Caruana’s draw.

Four of the players are still undefeated as we head into the fifth round of the event, and the chasing pack is starting to fall behind the tournament leaders. There is still time for everyone to turn things around but it looks like this Candidate Tournament has two tiers of players: there’s Nepo plus Caruana, and then there’s everybody else.

Neither Duda nor Radjabov came to play today

With all the excitement going on elsewhere in the field, this matchup got by far the least attention from the commentariat—and for good reason. There was very little action on the board here and both players seemed keen to take their half of the full point and move on to the next portion of this marathon event. Neither Duda nor Radjabov has gone for the jugular in previous rounds and their strategy seems to revolve around just hanging in there for now, staying in sight of the tournament leaders, and pushing for wins later on.

Radjabov, with a bruising round two loss in his jacket pocket and the Black pieces in this game, was more than content to just take the draw. Just like in his game against Ding Liren, Duda failed to find a tangible edge in the opening in the notoriously drawish Berlin Defense variation of the Ruy Lopez. He accepted Radjabov’s offer of a queen trade on move 23, and from that point on, there was little life left in the position.

This meeting of two of the pre-tournament favorites offered a chance for Liren to change his tournament’s trajectory, but he failed to seize the chance despite what seemed like a fairly obliging middle-game decision from Caruana that could have landed him in hot water on a different day.

A surprising pawn sacrifice on move 17 didn’t yield the complications Caruana was hoping for but the ensuing advantage also wasn’t enough for Liren to convert his chances into a full-on victory. It took a lot of planning and precise calculation from both players, but the emerging rook endgame was always fated to be a draw, and the players ended up splitting the points on move 64 in what was the longest game of the day.

This result leaves Liren in a dire position: the world No. 2 is joint-last in the field, despite having the White pieces in three out of four games played. (To contrast and compare, Caruana is now on 2.5/4 with two Black games already out of the way.) Since this is a winner-take-all tournament, the Chinese player has a mountain to climb and it looks like this will be yet another disappointing Candidates for him despite the miraculous last-second invitation—a huge surprise for chess fans around the world.

Rapport fails to tear down the Berlin Wall

No fireworks or inventions came to the fore today from an unexpectedly conservative approach by Rapport, who decided to play on Nakamura’s terms and engage with the Berlin Defense of the Ruy Lopez, one of the American’s specialties in his comparatively narrow opening repertoire. The queens were off the board by move 17, leaving a highly technical and even position behind them.

There’s no doubt Nakamura was happy to see this line emerge and he comfortably navigated the position to pick up another half a point with the Black pieces—a far cry from the complications he had to face against Alireza Firouzja in round three. The evaluation bar hardly ever budged from the midpoint and both players navigated a couple of tricky tactics in the endgame before trading off everything to call it a day by move 44.

Without a doubt, this was the game of the round, featuring an inexplicable collapse by Firouzja in a line he was clearly well-prepared for. The French youngster blitzed out the first 18 moves in a usually double-edged position emerging from the Sicilian Defense and he had the response on tap for the (admittedly fairly straightforward) novelty of 18. f6. But just two moves later, he seemed to have run out of road, relinquishing his time edge and still failing to find a good continuation. This was surprising in more ways than one: the fact that Firouzja purposefully went for the sort of sharp and double-edged position that is Nepo’s domain was shocking enough, and just how quickly he fell apart was even more so.

Arguably, 20. – Bxf1, the fruit of a 30-minute think, was already a misstep, but computers still deemed it an even position with precise play. It soon became clear that Black’s counterplay on the queenside wasn’t good for much since no lines opened up to Nepo’s king, and two back-to-back blunders pretty much gave the game away on the spot. Firouzja gave up his crucial b5 pawn with no logical counterplay in sight, then walked into a nasty move straight after with 24. – Bc8 followed by 25. Bb6!, collapsing Black’s defensive structures in the center.

Try as he might, Firouzja failed to find a way out from the hall of mirrors. His time allotment shrunk to just 84 seconds by move 27. He had to make 13 more to gain additional time on his clock while also making good moves, which would have been a monstrous task by itself, especially in a position that was already lost.

There would be no miracle: Nepo didn’t rush things and played methodically and carefully to convert the full point, uncorking a rook sacrifice on move 36 to end the game in style. With two wins in four games, he is the clear leader of the tournament. The scoreboard and the eye test tell the same tale: Carlsen’s last challenger is hungry for a second bite.

Rapport’s explosive rise earlier this year fueled suggestions that he is finally a part of the chess elite, having left behind some of the suspect parts of his explosive aggressive play. He is showing an unusually conservative side at his first Candidates so far but is also lacking the ability to punch through. Having to face an in-form Caruana and his legendary preparation with the Black pieces could mark the first time he succumbs to defeat at the event.

No one could have predicted that this game would be played for little more than pride only five rounds in, and the fact that Liren joined Radjabov at the bottom of the scoreboard is the most astonishing aspect of this Candidates so far. The Azerbaijani player has been solid if unspectacular so far, so it’s not like this game is a free win: somehow getting a full point out of this one with Black could keep Liren’s fading hopes alive for just a little while longer.

Both players are still winless at the Candidates and Firouzja has just suffered a damaging loss. As we’re reaching the one-third mark of this winner-take-all tournament, just keeping yourself in the chasing pack becomes less and less sufficient.

Duda’s been somewhat unimpressive so far at the event with a missed opportunity in round one and three straightforward draws since then. Meanwhile, Firouzja’s displayed bold piece sacrifices and deep preparation with little to show for it. His loss to Nepo today was rather worrisome, seeing how he’s completely lost the plot after his prepared lines ended. This might be where the levee breaks: the French youngster really needs to start pushing. Duda, meanwhile, would be pretty content with yet another draw wielding the Black pieces.

The streamer hero against the runaway freight train of the tournament should be an awesome and exciting game. It could also be a dud. Nepo’s clear advantage over the field after just five rounds means that he can play for draws and wait for his opponents to overextend against him. This is especially true with the Black pieces.

Nakamura’s 2/4 standing is a little deceiving: despite the loss, the fact that he’s already chalked off three Black games makes him stand out from the crowd with the same scoreline. Should he win, the entire tournament would be thrown into disarray. A draw, the most likely result, would suggest a grind. Another upset win from Nepo? It might be time for the rest of the field to pack things up and go home. (Except if Carlsen decides against defending his title: with that subplot in mind, second place actually has a meaningful value at this year’s Candidates Tournament.)