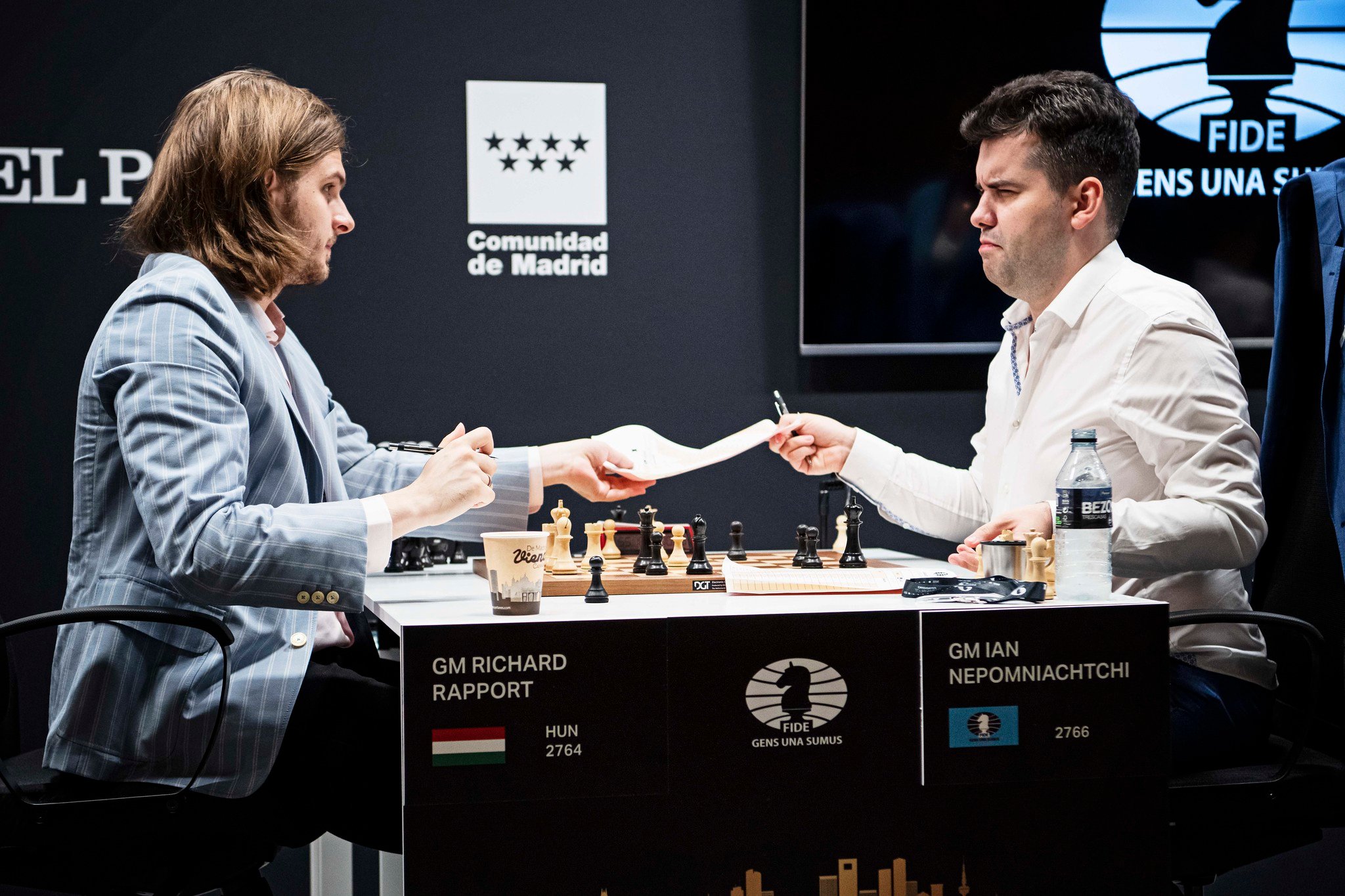 The frontrunners of the 2022 Candidates Tournament both scored wins, making it extremely unlikely that anyone else will catch up to them. Ian Nepomniachtchi was helped by an obliging Richard Rapport, who decided against taking a draw in a known theoretical line and paid the price for it, while Fabiano Caruana punished Teimour Radjabov’s unexpected opening choice to convert a pawn advantage in the endgame.

Having reached the halfway point of the event, the players will now face their opponent from the first round again, only with reversed colors. This means that the two tournament leaders will clash in a highly consequential game in Round 9. First, they will have to get past Ding Liren and Hikaru Nakamura, respectively.

It’s tough to describe just how much of a surprise this game turned out to be for everyone. In what Caruana described as the most shocking game he’s seen at top-level chess, Rapport tried and failed to take Nepo by surprise in a line of the Petroff with 8. Qb3?!, a move that led to an extremely sharp position that was only previously reached once in a correspondence game.

It was a line that was known at the highest levels of play for over a decade. Though White ended up with an extra rook, it came at the cost of getting his queen trapped, and Nepomniachtchi was also clearly familiar with the line, setting up a perpetual check to end the game in a draw. Rapport sunk almost an hour into figuring out the complications, then opted to play on with 19. f3.

This was a huge mistake from a practical perspective: even with precise play, the computer didn’t suggest much more than a draw, and sinking an hour into trying to figure out a solution to a line Nepo has clearly also studied was always going to end in disaster. And so it did, as Nepo hunted down Rapport’s queen and made the most of his own, scoring an effortless win by move 43, ultimately ending with more time on his clock than he started the game with courtesy of the bonus time allotted on move 40.

With this win, his tournament performance rating went over 3000 for the first seven rounds. So far, there’s no sign of a meltdown from Carlsen’s last challenger. A +4 score after seven rounds in this sort of a field is nothing short of ridiculous.

Duda fails to pose a real threat to Nakamura

It was another draw for the Polish player, who went into the mainline of the Nimzo-Indian Defense, and hasn’t brought anything eye-popping to the table. After a few slightly imprecise moves by Jan-Krzysztof Duda, it was clear that neither player would be able to conjure up any sort of an advantage, and they liquidated into an elementary rook endgame by move 40, agreeing to a draw.

With this result, both players live to fight another day, but they are quickly running out of time as the leaders keep racking up wins.

Here is Nakamura’s own video of the game:

Ding Liren and Firouzja play out a comfortable draw

Ding Liren opted for a sideline of the English Opening (the King’s English Variation). The players followed a recent game between Caruana and Wesley So until move 10. Once again, Firouzja fell behind on the clock, but there would be no punishment for his transgression this time: White couldn’t find an advantage, and the players traded into a rook-and-knight endgame by move 31.

Even though Black had an extra pawn to work with, the position was a straightforward draw, and the players proved the point by move 54, trading down almost all the material before agreeing to split the points. It was a result that didn’t really benefit either player, as they are now even further behind the leaders, with no realistic chance of catching up despite still having seven rounds to go.

This game featured a surprise as early as move two, as Radjabov opted for the O’Kelly Variation of the Sicilian Defense with 2. – a6. Though Radjabov has previously played the Sicilian with Black, it’s not been his opening of choice for a while, and especially not this oddity that’s been universally understood to be quite subpar for Black for a very long time.

And yet, here it was, and the famously well-prepared Caruana was out of book after just two moves, taking over ten minutes to choose his third move of the game. Improvising, he found the optimal continuation with 3. c4. He kept playing ambitiously and aggressively, even knowing that this would likely walk into more of Radjabov’s home preparation: 6. – d5 was a surprising and interesting move, sacrificing a pawn for lots of counterplay, but Caruana was precise and nursed this advantage all the way to the end.

That isn’t to say that it was a mere procession from this point onward. Caruana found an inventive king walk from g1 to g6 to break apart the position, Radjabov castled directly into an open file by going long, and even though both players ended up getting a new queen, it was the American who emerged from the complications with a winning position, and a much-needed full point to keep up the pressure on Nepo.

Candidates Tournament 2022 – standings and round 8 matchups

Here’s an incredible stat for you: apart from the two leaders, Nakamura is the only player to score any victories so far (one) as we reach the halfway point of the event. It’s tough to envision anyone from the field catching up. Even though Nepomniachtchi does have the tendency for collapses later into long events, it would take multiple stumbles from Caruana as well to let anyone else surge into contention. It is still not impossible, but it is exceedingly unlikely. According to chess forecasting site Pawnalyze, the two leaders have an over 95% chance to win the event compared to the rest of the field.

Round 9 will see the two titans face off against each other again. Meanwhile, we get repeats from the round 1 matchups next, but with reversed colors. Nepo and Caruana both won their games in round 1; could they possibly do so again?

Rapport got away with a poor opening setup against Duda to earn half a point. Since then, both of them have been consistently racking up draws, with varied displays of preparation and skill. Rapport’s spectacular implosion against Nepo was his first loss in the tournament, and perhaps a sign of how he’s going to approach the rest of this winner-take-all event.

Duda’s been solid-but-unspectacular so far, and he definitely didn’t have to save as many losing positions as Rapport did in the first seven rounds. If the Hungarian pushes too far, even a win by Black could be on the cards.

This game set the tone for both players in Round 1, as Ding Liren somehow managed to lose with the White pieces against Nepo. He’s only been able to score draws since then, albeit with consistently improving displays of skill. He missed his chance to find a win against Radjabov in Round 5. Facing the tournament leader is his last chance to find a way back from the wilderness.

Nepo also has a lot to ponder: with Caruana still keeping up, how much does he need to push for a win here? It will be fascinating to see his approach.

This matchup marks Nakamura’s only loss so far in the event, and his recent record against Caruana is nothing short of terrible. A win here would give him an outsized chance to catch up with the tournament leaders. Anything less is most likely too little, too late, so viewers can expect some serious aggression. Meanwhile, an in-form Caruana would probably take a draw with the Black pieces even at this juncture of the tournament.

Incredibly, these two players are rooted to the bottom of the scoreboard after seven rounds. This has been a nightmare event for Firouzja so far despite some impressive displays of preparation early on, and he’s been unable to deal with persistent time trouble issues that have cropped up after the first rest day. Meanwhile, Radjabov is clearly not on his A-game and has a target on his back, and up until this incredible O’Kelly game, he seemed content to take draws. Three points down compared to Nepo, this is probably just a matter of pride now for these players.