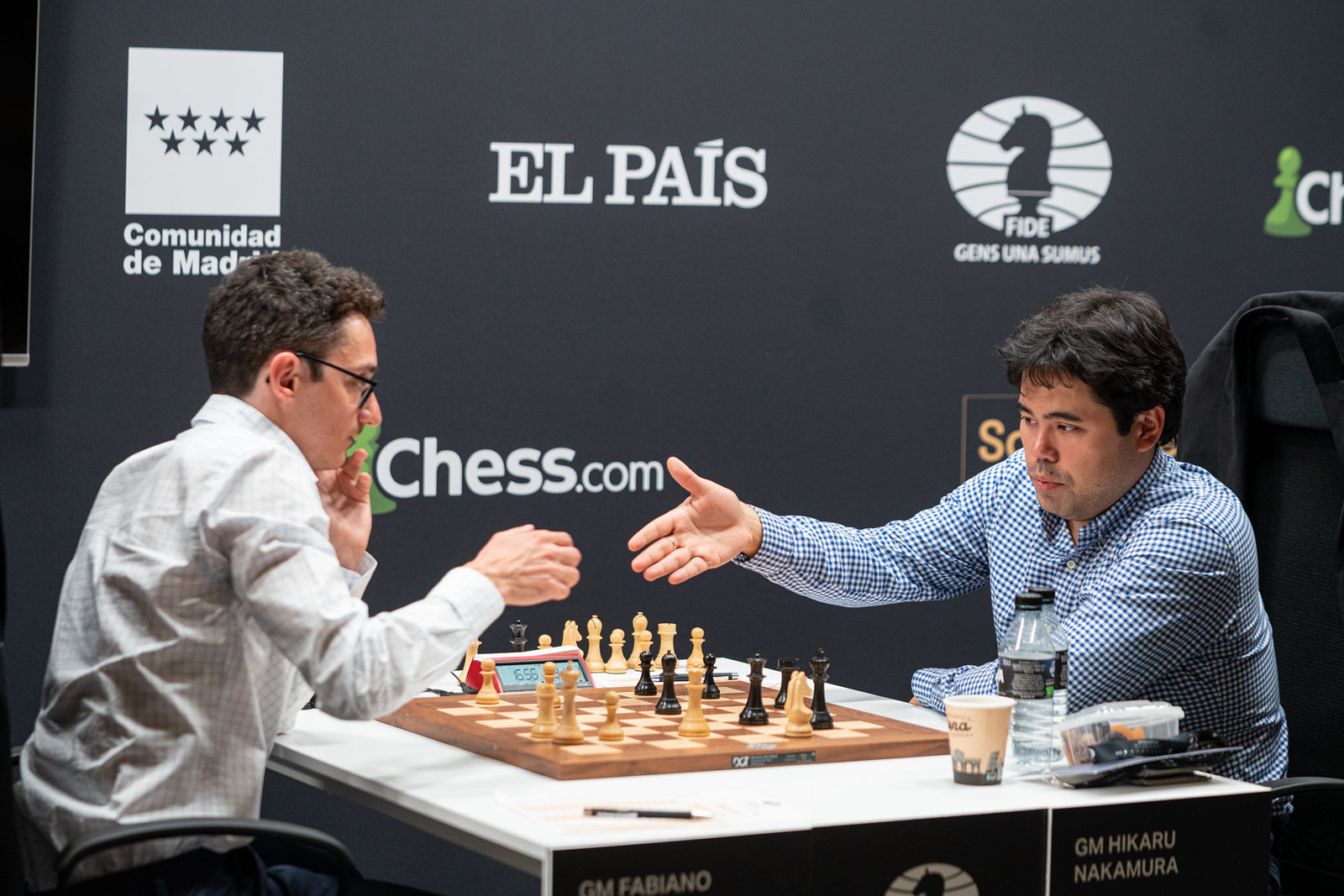 The 2022 FIDE Candidates Tournament has kicked off with quite the fireworks display in Madrid. Eight of the best chess players in the world are squaring off against one another for the right to challenge world champion Magnus Carlsen.

Popular player and surprise participant Hikaru Nakamura lost a grueling battle against fellow American GM Fabiano Caruana, but the biggest shock of the day was world No. 2 Ding Liren’s defeat with the White pieces against previous challenger Ian Nepomniachtchi.

Nakamura’s quest starts with a defeat

Without a doubt, Nakamura is the player with the biggest following at the Candidates and the player who’s done the most in making a new generation of fans interested in competitive chess. His fairytale performances at the FIDE Grand Prix didn’t carry over to Madrid, at least not yet, as he succumbed to defeat against Caruana.

Playing the Black pieces, Nakamura deployed his traditional Berlin Defense. His predictable opening repertoire was highlighted as his biggest weakness heading into this event and Caruana prepared a complicated sideline. Soon thereafter, he gained a comfortable strategic advantage and Nakamura eventually decided to detonate his position on the 24th move with d5.

This was the beginning of the end since Caruana slowly and calmly peeled off the pawns, taking advantage of Nakamura’s exposed king. Despite Naka’s best efforts to throw a wrench into his plans during time trouble, the position completely collapsed by move 10, ensuring that the most popular chess streamer’s Madrid adventure began on a sour note.

Nepo reminds everyone of how good he is

Carlsen’s last challenger completely fell apart in the second half of their world championship match, which led to many questioning his ability to keep up with the chess elite in this event. But Nepomniachtchi posted a quick reminder of why he got so close to the chess summit last year, taking down world No. 2 Liren in convincing fashion—playing with the Black pieces, no less.

Liren chose a rare version of the English Opening to start his quest for the Candidates win, with the players emerging from theory into a new position as early as move 11. On move 21, the Chinese GM’s ill-advised decision to lift his rook straight into a traffic jam on d4 gave Black everything needed to get a strong attack started on the kingside.

Liren succumbed to the pressure soon thereafter, making a difficult position completely untenable by a misjudged capture of a pawn. The greedy 26. Nxb7? pretty much ended the game as a contest: Five moves later, Nepo had a forced mate on the board, and by move 32, Liren resigned.

It’s tough to overstate just how much of a shocking result this was. In elite-level tournaments like these, draws are the most common result and the players with the White pieces are considered to have a small but meaningful advantage. Losing one of your games when you have this edge is a massive setback and many fans will be curious to see if Liren can recover from it.

Rapport survives his own traps to draw against Duda

Whether it was a great escape from Rapport or profligacy from Duda that led to the eventual splitting of the points will remain a point of contention long into the night among chess fans. The tale of the tape is clear: Duda used one of Rapport’s own opening tricks in the Taimanov Variation of the Sicilian Defense (5. Bf4) and gained a clear advantage soon thereafter. By move 15, the computer gave an evaluation of +1.5, which is usually the beginning of the end among elite players.

But a series of imprecise moves by Duda slowly gave the edge back and Rapport was able to stabilize from a position where his king was stuck in the middle of the board throughout with little to show for it. After the players liquidated the heavy pieces, Black set up a comfortable blockade and the players proceeded to trade off the rest of the material to end the game with a draw.

Fiery Firouzja makes an exchange sacrifice to earn half a point

It was a battle between generations when the oldest player in the field faced off against the youngest in the opening round. It was the first game between Teimour Radjabov and Alireza Firouzja in classical time controls, and the intriguing premise delivered in spades with an exciting game.

Both Radjabov and Firouzja opted against participating in the big tournaments of the past couple of months, opting to prepare for the Candidates instead. Radjabov’s poor showing at Norway Chess just a few days ago seemed like a harbinger of doom for the Azerbaijani player and his fans. Though he faced the same sort of time trouble pressures here that led to his downfall in Stavanger, he navigated a complicated position well and eventually scored a comfortable draw in a rook endgame where he was the only player with a chance to win.

On the other hand, Firouzja’s moves also suggested that he is very much coming to play and he is unfazed by the pressures of the Candidates Tournament despite his young age. Even though he was playing with the Black pieces, he went for a complicated and dynamic position with an exchange sacrifice, giving up a rook for a fantastic bishop on move 18, and posed a lot of difficult questions to his opponent. Still, Radjabov kept pushing, and had a small edge by move 30, albeit with just six minutes on the clock. Eventually, the players liquidated into a rook endgame where White was up a pawn, a drawn position according to the tablebase but one that wasn’t entirely clear over the board. The players played around with it for a while and eventually agreed to split the points on move 71.

The two young and explosive players clash in the second round after two draws, and this is a huge match for both participants. Rapport’s rollercoaster of emotions could be seriously sent downward if he doesn’t take advantage of the White pieces. And who knows how Firouzja will react if his aggressive style of play only nets him half a point from the first two games.

The two oldest players in the field have a lot to prove here, especially because neither of them are expected to challenge for the top spot in this winner-take-all event. With Nakamura dropping his first match and Radjabov tying with the White pieces, this is already a crucial battle for these two.

If Nepo wins this match, he might just have a full point’s worth of a lead over the field after just two rounds, which would be an incredible start and a testament to just how strong he can open in these tournaments. But the same goes for Caruana, though his task is a whole lot harder with the Black pieces. These are the two players in the field who have previously faced off against Carlsen in a world championship match, and this experience could prove crucial as the event develops.

The shock loss by Liren means he’s pretty much in a must-not-lose situation here as early as round two, putting all the pressure on him. Duda will feel some jitters after failing to capitalize on a great position against Rapport, and having back-to-back White games to start is only worth something if you can actually win them. Whether he can make up for dropping the ball in round one remains to be seen.