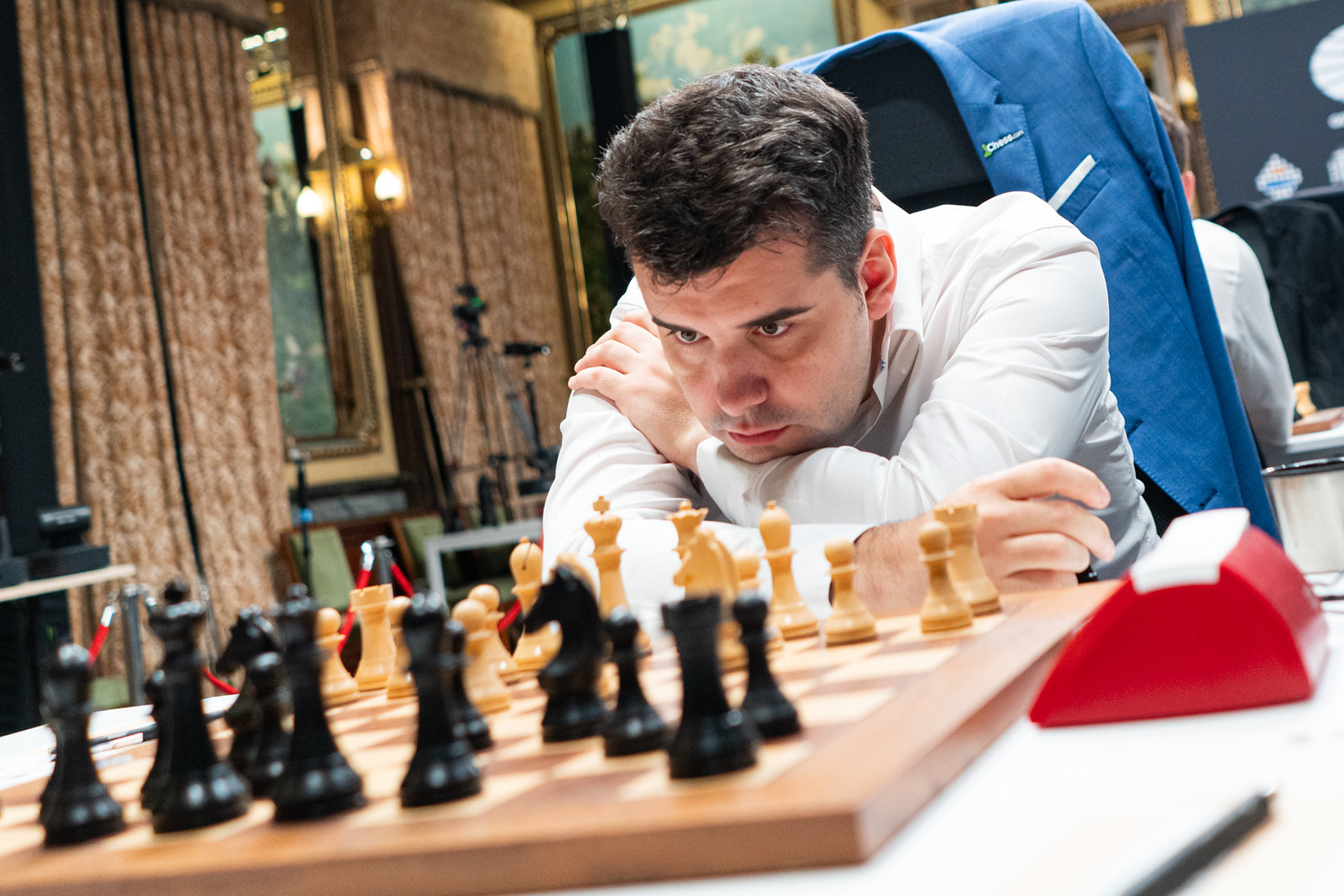 The Russian grandmaster sealed his tournament victory with a draw against Richárd Rapport to achieve an unassailable lead with a round to spare. With this, Nepomniachtchi became the first player to win back-to-back Candidates Tournaments.

Dominant throughout and scoring an incredible five wins and no losses after thirteen rounds, this was a monstrous and mature performance from a player many have considered to be too streaky and fragile to regain his challenger status.

Nepo sat down to the chessboard today knowing he only needed a draw to guarantee himself a tournament victory and a chance to play again in a world championship match. Should Ding Liren and Hikaru Nakamura both fail to win their own games, not even that would be necessary. Rapport, ever the sportsman and explosive player, went all-out with the Sicilian Defense in a bid to create complications and winning chances.

However, Nepo expertly parried his attempts throughout the game and simplified the position quickly, with the queens coming off by move 17.

The game was over by move 37 via three-fold repetition, and with this, Nepomniachtchi guaranteed himself the tournament win, regardless of results elsewhere. It’s tough to overstate how dominant and impressive this performance was, even if you can definitely point to individual games where he took advantage of his opponents’ unusual meltdowns and mistakes.

For a player known to be streaky, tilt-prone, and with a tendency to overreach, he did an incredible job to prove the doubters wrong by taking lots of simple draws where it suited the tournament situation as he calmly and methodically made use of all the errors made by his opponents.

His play was quick and effective and he only had a worse position on two occasions throughout the thirteen rounds, and he’s managed to salvage both with draws.

He was clearly the best player in the field and a tier above his competitors, and regardless of whether Magnus Carlsen deigns him with his presence in the upcoming world championship match, Nepomniachtchi will be a worthy challenger for the title. Vasily Smyslov (in 1953 and 1956), Boris Spassky (in 1965 and 1968), and Garry Kasparov (in 1987 and 1990) all took two attempts to usurp the holder: no doubt Nepo would love to become the fourth name on this list.

Radjabov, Caruana quickly draw game and drop out of the running for second place

It was clear Fabiano Caruana didn’t believe in the value of a second-place finish and he went all-out in a bid to catch up with Nepo in the second half of the tournament, which led to disastrous results. He scored just one draw in a four-round sequence.

Though Caruana and Radjabov still had an outside chance to finish in second place with back-to-back wins in the last two rounds (provided Ding Liren and Hikaru Nakamura didn’t win their own games today), it was clear neither player was really going to push for a low chance to maybe finish in second. Even if they believed there was a realistic chance of Magnus’ abdication, too many results would have had to go their way.

Instead, we got a quiet draw from a previously seen line in the Open Catalan and the players quickly traded off everything and shook hands by move 31.

Liren tries and fails to make something out of nothing vs. Firouzja, earns half point for his troubles

Of these two players, only one was still in the running at this event to have something to play for in the final round. Ding Liren and Hikaru Nakamura entered round 13 on even points, getting ready to play each other in tomorrow’s game to decide who finishes second behind Nepo and possibly get a chance to serve as Carlsen’s budget replacement. (Of course, there was also a very faint chance they could make a run for first place too should Nepo have failed to secure at least one draw in the final two rounds, but he swiftly put those dreams to rest and won the tournament).

As the games progressed, it became clear Radjabov and Caruana would draw their game, leaving Ding and Hikaru as the last two standing in the battle for second. It seemed like the Chinese GM wouldn’t get much out of the game against Firouzja as they’ve gone down the same line in the Four Knights Game Nepo used against him previously to secure a quick draw.

Indeed, the position remained even throughout, according to the almighty computer evaluation, but Liren found a neat way to generate counterplay by sacrificing a pawn and rolling the rest of his army down the board in menacing fashion. Ultimately, there was nothing there, and precise play by Firouzja nullified any threat that could have emerged, and the players ended up splitting the points on move 42.

The only decisive game of the round came courtesy of Nakamura’s aggression and Duda’s visible mental fatigue. The Polish grandmaster sprung a bit of a surprise by leaning away from the Petroff he’s been relying on against 1. e4 so far in the tournament, instead going for a line in the Najdorf Sicilian Nakamura has already explored at the board in this event.

The players broke new ground as early as move 8 with Duda’s 8. – h6, an oddly committal choice that left a target on g6 for Nakamura to exploit. He did just that by move 13, slingshotting a knight into the square after making a trade on e6, blocking Duda from castling.

He continued to build up an imposing kingside presence before sacrificing a pawn, a decision that wasn’t accurate (according to the engines) but one that still maintained equality with precise play.

The ensuing play wasn’t precise, however.

Sometimes, the tiniest decisions can make all the difference in chess. On move 30, Nakamura moved his rook from d1 to d2 instead of d3 in preparation for a full-scale assault on the d-file, but this square choice allowed Duda to gain a crucial bit of extra time by playing Bg5 to force Nakamura to play Rd3 anyway, albeit at the cost of an additional move.

Here, Duda could have secured a big advantage had he played the straightforward 33. – b4, but he overthought the matter and detonated the position with d5 instead. It was a simple miscalculation of the ensuing tactical fireworks: Nakamura had a nifty in-between move to rely on in the form of 35. Bd6 to evacuate his bishop and dash Duda’s hopes for an advantage.

By this point, the Polish grandmaster was visibly unhappy and uncomfortable, and he quickly folded, failing to find the accurate continuation after the maximum-pressure 37. d6, and Nakamura never looked back.

By move 52, the valiant d-pawn made it all the way to the seventh row and Duda threw in the towel. With this victory, Nakamura enters the last round in clear second place, setting up a decisive game against Ding Liren with the Black pieces where even a draw would suffice for him to earn the silver medal. Here is his recap of the game:

Candidates Tournament 2022 – standings and round 14 matchups

Though Nepo has already claimed his victory, the last round won’t be the sort of procession you’d normally expect from a winner-takes-all tournament where someone was already crowned champion. The Rapport-Radjabov and Caruana-Firouzja games will likely be quick draws because none of the players have anything to play for.

Nepo can still clinch an undefeated tournament and an incredible record, and he did mention in his post-match interview he very much wants to take the game seriously because of how poor it felt to lose the last round’s game in similar fashion back in 2021 at his previous Candidates Tournament win.

A mentally collapsing Duda seems like a very obliging opponent in this regard.

Maybe he will instigate a quick draw and Nepo will just accept it? Or will the young Polish grandmaster try to be the only player who gets to take the winner’s scalp? There are burning embers of intrigue there and this game could be approached in many different ways by the two participants even though there is technically nothing left to play for.

But the big game of the day is the matchup between Ding Liren and Hikaru Nakamura, for they still have something to play for: second place.

Normally, the Candidates Tournament’s winner is the one that gets to challenge the reigning world champion, so there isn’t anything else to play for. However, this is a special case: Carlsen has given many interviews saying he is not sure whether he will play another championship match, citing the grueling nature of the preparation and format concerns.

Now, many still see this as a negotiating tactic on the world champion’s part, and his big smile in a recent interview might have given away the game in this regard. Reports suggest he’s just met FIDE’s president to request changes to the match format. Perhaps it’s not entirely fair on Liren and Nakamura that they still don’t know whether they actually have anything to play for—but from the short-term perspective of the fans, this adds a lot of intrigue to the final day in a tournament that has otherwise already been decided.