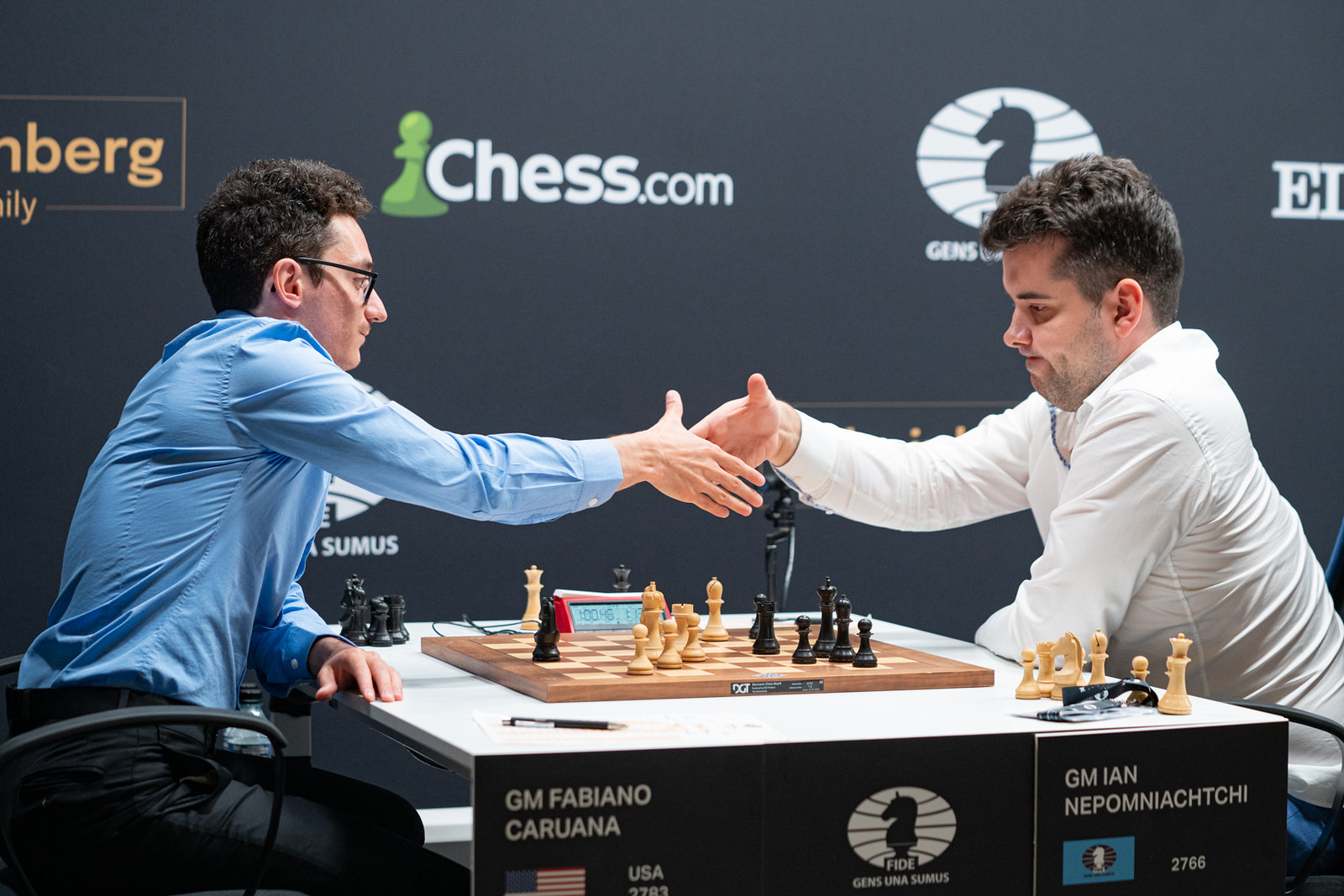 Round nine at the 2022 FIDE Candidates Tournament was a round of time trouble where all eight chess players had to scramble to meet their obligations to the clock at one point or another, making this an exciting and impactful affair. The tournament leaders ended up drawing in a dramatic match where Fabiano Caruana failed to convert his advantage. Elsewhere, the previously dormant players of the tournament showed why they are not to be underestimated since Ding Liren, Alireza Firouzja, and Teimour Radjabov all won their games.

This meant that Hikaru Nakamura is now two points behind the tournament leader Ian Nepomniachtchi, with just the faintest of hopes left to catch up. The same holds true for everyone other than Caruana, who also failed to make the most of his opportunity today while sitting straight across from Nepo.

The speculation about Magnus Carlsen’s intentions is now in full swing: the world champion has hinted that he may very well abdicate his title, and a rematch against his last challenger may seem like an unappetizing affair for him. Should he do the unthinkable, the winner of this event would play a title match against the runner-up, meaning there is actually some potential value to second place in this winner-take-all tournament.

Rapport tries to complicate things again and pays the price

It was three decisive results in a row far Richárd Rapport after seven draws, though the way things panned out were very different than he would have liked. Throwing away a guaranteed draw against tournament leader Nepomniachtchi was a poor way to close out the first half of the tournament, but at least he made up for it with an impressive win over Jan-Krzysztof Duda to even up his score. Now he is back to -1 after pushing things too hard with the Black pieces against Firouzja, who picked up his first win at what has been a disappointing event for him so far.

You can’t fault Rapport for pushing hard in a winner-take-all tournament but he never really had an advantage in the super-complicated position that emerged from the anti-Berlin. 13. – a5 was an oddball novelty that allowed White to aggressively expand at the cost of a pawn. Rapport eventually picked up a second pawn on b2 at the cost of his king getting stuck in the middle of the board for tactical reasons. This ended up causing his downfall.

Firouzja missed his first opportunity, going for 20. Be3 instead of Bd2, a subtle but important difference that would have allowed the bishop to end up on c3 in some lines. Still, the position was incredibly difficult to hold for Black despite the material advantage, and as the complications racked up and the players headed into time trouble, 26. – Bc4 allowed 27. Rf5 and led to a quick collapse of the position due to Black’s many weaknesses: a weak pawn chain on the queenside, a king under fire, and a myriad of pins that eventually led to the deadly loss of material on move 41.

Hikaru overextends and gifts Radjabov his first classical win since 2019

It seemed logical that Nakamura would try something against Teimour Radjabov even with the Black pieces. He has an excellent lifetime record over the Azerbaijani player, who’s not been having a particularly great tournament so far, and he has also managed to beat him earlier in this tournament. The strategy backfired spectacularly, however, as Hikaru’s decision to sacrifice a pawn for an attack that wasn’t even brewing yet turned out to be a clean mistake. Radjabov held onto his advantage with precise play, eventually converting an easy endgame.

Both players are well-versed in the dark arts of the Anti-Berlin System (the 3. Nf6 4. d3 line of the Ruy Lopez), and the game progressed along predictable lines until move 13 when Nakamura lashed out with Bg4, a move that could have potentially led to a forced draw or interesting complications after the fall of the a5 pawn if not for 17. Qe2, an excellent resource for White and the only move to maintain an advantage.

Down a pawn, lacking counterplay, and facing an outside passed pawn on the queenside, it was always going to be a tall order for Nakamura to get something out of this game without conjuring up a direct attack on White’s king. This never materialized and it was quite clear by move 26 that Black was in serious trouble. This was the point where the queens were traded off, and with both players having around 10 minutes on the clock to reach move 40, Radjabov was the one who handled the complications better.

This was the Azerbaijani player’s first win with classical time controls since 2019 (alongside 31 draws and 5 losses) and his first victory over Nakamura in his career. It could not have come at a worse time for the American, who was understandably disappointed about the way this game panned out.

You can find his recap of the game below:

Caruana misses a huge chance to tie up the tournament

The marquee matchup of the day featured the two runaway leaders going up against each other, with the chasing Caruana having the White pieces at his disposal. After his unexpected loss to Nakamura yesterday, he was a full point behind Nepo and had to push for a win in this game.

And so he did, unleashing some incredible preparation in Nepo’s darling that is the Petroff, finding a way to get a tangible advantage by conjuring up 18. Qa4 after a half-hour think, a neat idea that soon led to great discomfort for Black and a big advantage for White. At one point, the computer evaluation read +2 after Caruana reinvested his significant lead on the clock.

But the position’s eye-popping tactical complications were beyond even one of the world’s best chess players. Despite the superior preparation and his initial massive lead on the clock, Caruana couldn’t find his way through the hall of mirrors and dropped his advantage with 24. Bxf5, a move that allowed Nepomniachtchi to simplify with precise play. Shockingly, Caruana admitted in his post-match interview that he didn’t even consider Bf1, the move that would have kept his advantage, despite burning all his time on the clock.

Now the players were left with an even position but an uneven situation on the clock. Caruana had to scramble to make time control, squeezing the most out of his 150 seconds to make the last seven moves. Actually, it was Nepo who had a chance to push for a win with his passed pawn, but he decided for a simpler continuation with 33. Rd8, and no doubt he was pleased about surviving this theoretical onslaught and splitting the points with his main tournament rival, wielding the Black pieces no less.

Ding Liren scores his first win against a collapsing Duda

This is quickly becoming a nightmare tournament for Duda after suffering back-to-back defeats with the Black pieces. In what can only be described as a masterclass of grinding, Liren got a comfortable but fairly even position out of the opening in a Neo-Catalan structure and proceeded to massage a near-0.0 evaluation as Duda kept sinking deeper and deeper into time trouble. Eventually, the Polish grandmaster cracked, missing a key defensive resource on move 40: Bxe4 allowed White to get to the f7 pawn and rip apart Black’s position from the inside, while the fairly ridiculous Bh5 followed by g5 would have at least given up a significantly less valuable pawn and could have led to a survivable endgame.

Instead, Liren made the most of his passed pawn and Black’s complete passivity, calmly walking over his king to c1, forcing Duda’s rook to retreat. Six moves later, the king was on a4, ready to assist the passed pawn to promotion, and the Polish youngster resigned the hopeless position.

With this, Duda is now dead last in the tournament with three points out of nine while Liren has surged to joint-third place with an even score of 4.5/9 and an outside chance to snatch the potentially meaningful second place, even if Nepomniachtchi is most likely out of his sights.

Candidates Tournament 2022 – standings and round 10 matchups

With just five rounds to go, Nepomniachtchi is the clear favorite to win this year’s Candidates Tournament, having just drawn his match against his closest rival in the form of Caruana. No one knows whether second place will be worth anything yet since it is based on Carlsen’s mercurial decision, but the possibility should also have an impact on the players’ strategies moving forward. The event will continue on June 29 with round 10 after a rest day.

These two players are on a different trajectory here, with Rapport beginning to wobble and Liren picking up steam and confidence. All three results are possible here, and for the neutral observers, the possibility of getting the world No. 2 back in the mix for the tail end of the tournament would be a desirable if unlikely outcome.

Duda’s sinking fast and he hasn’t had a single game where he clearly outplayed his opponent. He posed no questions to Caruana when he had the White pieces and the real intrigue here is just how hard the American will push with the Black pieces in a bid to catch up with Nepo.

The last round was a great reminder that Radjabov is no pushover, even if he’s clearly among the weaker players in this field. Nepo claimed an effortless draw against the Azerbaijani in the first half of the tournament, who hasn’t really been trying to push for a clear advantage with the White pieces. Nepo’s the one with the White pieces this time, and this is one of his best opportunities to snatch another full point and solidify his lead in the tournament.

Both players are practically out of the running in Madrid, though Nakamura still has an outside chance of snatching a potentially relevant second-place finish. Neither the hungry Frenchman nor the popular streamer will settle for a quick draw, though.