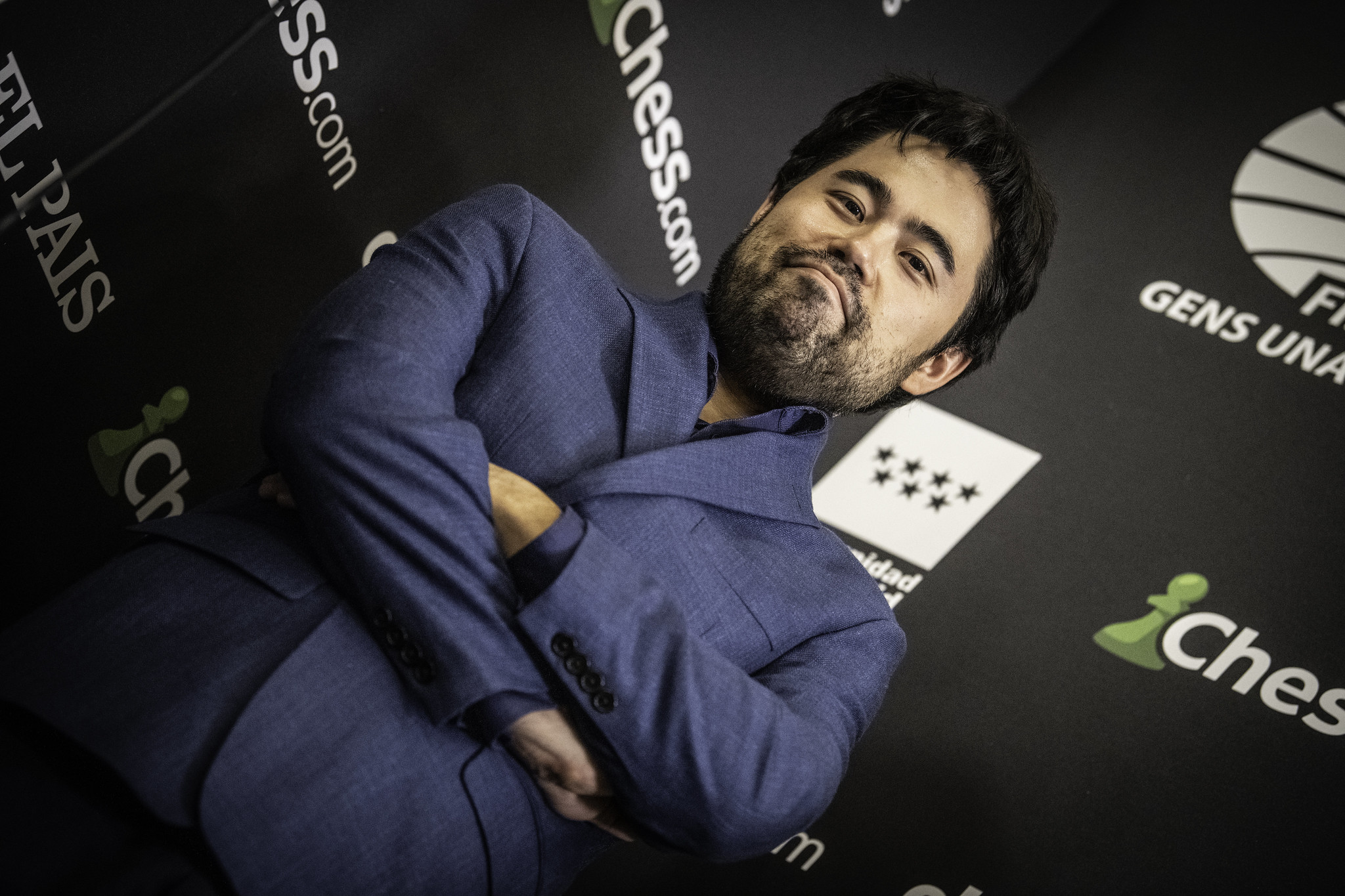 Chess players began to go for broke at the 2022 FIDE Candidates Tournament today with the window of opportunity to catch up to tournament leader Ian Nepomniachtchi closing fast. Just like in the previous rounds, this led to a lot of drama and decisive results, with complications across the board leading to an unlikely leaderboard as we reach the two-thirds portion of the event.

Nepomniachtchi quickly drew with Teimour Radjabov to maintain his lead while Fabiano Caruana went all-in with the Black pieces against Jan-Krzysztof Duda and paid the price. This meant that wins by Hikaru Nakamura and Ding Liren created a three-way tie in second place, with Nepo 1.5 points clear four rounds before the end. Since there’s a real possibility that Magnus Carlsen declines to participate in the next world chess championship match, a second-place finish might have huge significance.

Nepomniachtchi plays quiet draw with Radjabov, keeping up his lead

It was all quiet on the tournament leader front when Nepo kept things simple and clean against Radjabov, even in what was perhaps his best remaining chance to score a full point with the White pieces. He opted for a trendy new line in the Catalan Opening, one he’s no doubt studied as part of his world championship match preparation against Carlsen. It was a line where he had little risk of losing and could quickly steer clear of complications.

By move 24, the computer evaluated the position as dead even, and as all but one pair of pieces were quickly traded off alongside the queenside pawns, the players called it a day and shared the point.

Caruana goes for broke and gifts Duda his first victory

Essentially, Caruana was tasked with winning on demand with the Black pieces, a humongous task in elite-level chess. His opponent, Duda, has had a tough time at this tournament so far, stuck on the bottom of the scoreboard with three losses and zero wins after nine rounds of play. Caruana, 1.5 points away from Nepo with five rounds to go and having already played him twice, had to take enormous risks to keep his dreams of winning the tournament alive.

By move 11, the players reached a narrow pocket of theory in the Giuoco Pianissimo where Black players have three wins and one draw at an elite level, one of which was scored by none other than Caruana himself against Alexander Grischuk in 2019. But Duda went with a slightly more cautious approach and Caruana overreached with 17. – g5, beginning a scary-looking but unsound attack. Duda had to battle his own demons as well as Caruana here, visibly uncomfortable and annoyed at himself, seemingly resigned to another defeat courtesy of a direct attack on his king.

But the attack never made sense and Caruana didn’t have an advantage at any point during the game. Duda failed to find the cleanest continuation on move 32 as both players were getting into time trouble, but he found the fantastic 39. f4, the best move according to the computer, to fully shut down Caruana by winning material.

Caruana kept trying for an hour longer, attempting to salvage a draw with two pawns against a knight, but Duda carefully kept his composure and maintained the rooks on the board, converting the gift given to him by his opponent to secure his first victory at the 2022 Candidates Tournament. With this, Caruana has lost two out of his last three games and may be out of contention entirely.

What a game this was. Fresh off a third-place finish at Titled Tuesday, Nakamura scored his third victory in Madrid in spectacular fashion over the young Alireza Firouzja, who came to play and had novel ideas but misevaluated a middle-game position that emerged from his comfort opening with Black, the Najdorf Sicilian. After 10. gxf6, a dubious move that opened up the g-file for a potential attack that never materialized, Nakamura wisely retreated with his bishop to b3 and maintained Alireza’s damaged structure.

The plan turned out to be so half-baked that Nakamura could even castle toward that open line without fearing repercussions. On move 23, he sacrificed a rook for a knight in a positional masterclass: the piece on f5 turned out to be critical in the eventual winning combination that exposed Firouzja’s vulnerable king.

By move 29, the young Frenchman was in impossible time trouble and hopelessly lost, resigning four moves later with an unstoppable checkmate threat on the board. Nakamura played a nearly perfect game according to our master and overlord Stockfish, a hugely impressive performance that gives him an outside chance to catch up with Nepo or to at least finish in a clear second place at the event.

Here is Nakamura’s recap of the game:

Once again, Richárd Rapport brought along the fireworks, conjuring up yet another incredible game against Liren in the tournament. The Hungarian GM launched a ferocious attack against Liren, sacrificing pawns and pieces along the way but failing to find a breakthrough.

The position remained terrifying yet even throughout up until move 42 when Rapport, despite having enough time on his clock to further consider the complications, misevaluated the position. He played Rc3 and won a rook for a knight and a pawn, a net gain of material. But in this specific case, this was the cause of his defeat. He had no time to coordinate his weaknesses and Liren used his two bishops to rapidly escort his passed pawn down the board while generating other threats Rapport had to try and parry, scoring a momentous victory with the Black pieces and reminding everyone why he was the world No. 2 on the rating list heading into this tournament.

Candidates Tournament 2022 – standings and round 11 matchups

Interestingly, the youngest and least experienced players in this Candidates Tournament are looking scared in the spotlight, with 19-year-old Firouzja joining 24-year-old Duda and 26-year-old Rapport. As a reminder, the rest of the field features two 29-year-olds and everyone else is in their 30s, including the tournament leader, 31-year-old Nepomniachtchi.

After a solid and draw-filled start by Rapport, he’s been falling apart as the tournament has progressed along. Back-to-back losses, a part of a string involving three defeats out of four games, vaporized his chances of success in Madrid. Meanwhile, Nakamura has something tangible to fight for: second place and a sliver of a chance to catch up to Nepo in first. He’s the only one of the immediate chasing pack who will still play against the Russian in a later round, albeit with the Black pieces. Better play, better score, White pieces, and more motivation: Nakamura might convert again.

This is going to be an explosive affair. Firouzja has nothing but pride to play for at this point and he is clearly going for complications, not lying down without a fight. This can backfire, as we’ve just seen against Nakamura, but it can also net important wins, as in the case of his match against Rapport. No doubt Nepo would love to take a quick draw and move on, but it’s highly unlikely that Alireza will grant his wish. Of course, it would be just the sports thing to see the player in dead last inflict the first loss on the runaway tournament leader—and this is the outcome neutral fans are all hoping for.

This one is purely for pride. Though Radjabov is fifth in the standings, he is still on a negative score (one win, two losses, seven draws), while Duda was by far the worst-performing player as of the last round with three defeats before Caruana overreached to give him his first win of the tournament. We’ve already seen Radjabov (controversially) opt for drawish lines with White at this tournament, so no one would be surprised if he did so again.

It may have seemed impossible after the first couple of rounds, but Liren could leapfrog Caruana in the standings with a victory here, however unlikely it may be. He’s just scored a big win against Rapport with the Black pieces and another one would be nothing short of incredible. Meanwhile, Caruana is pretty much out of the running, but arguably still the most likely to snatch second place, which could have tangible value should Carlsen decline to play in next year’s title match. In that case, it’s this tournament’s winner versus the runner-up in a 14-game match to decide his successor.

But momentum is not on his side. Liren’s been flying in the second half of this tournament, just as Caruana began to flounder and miss opportunities. Is it possible? Could he drop the ball again, this time with the White pieces? We will know soon.