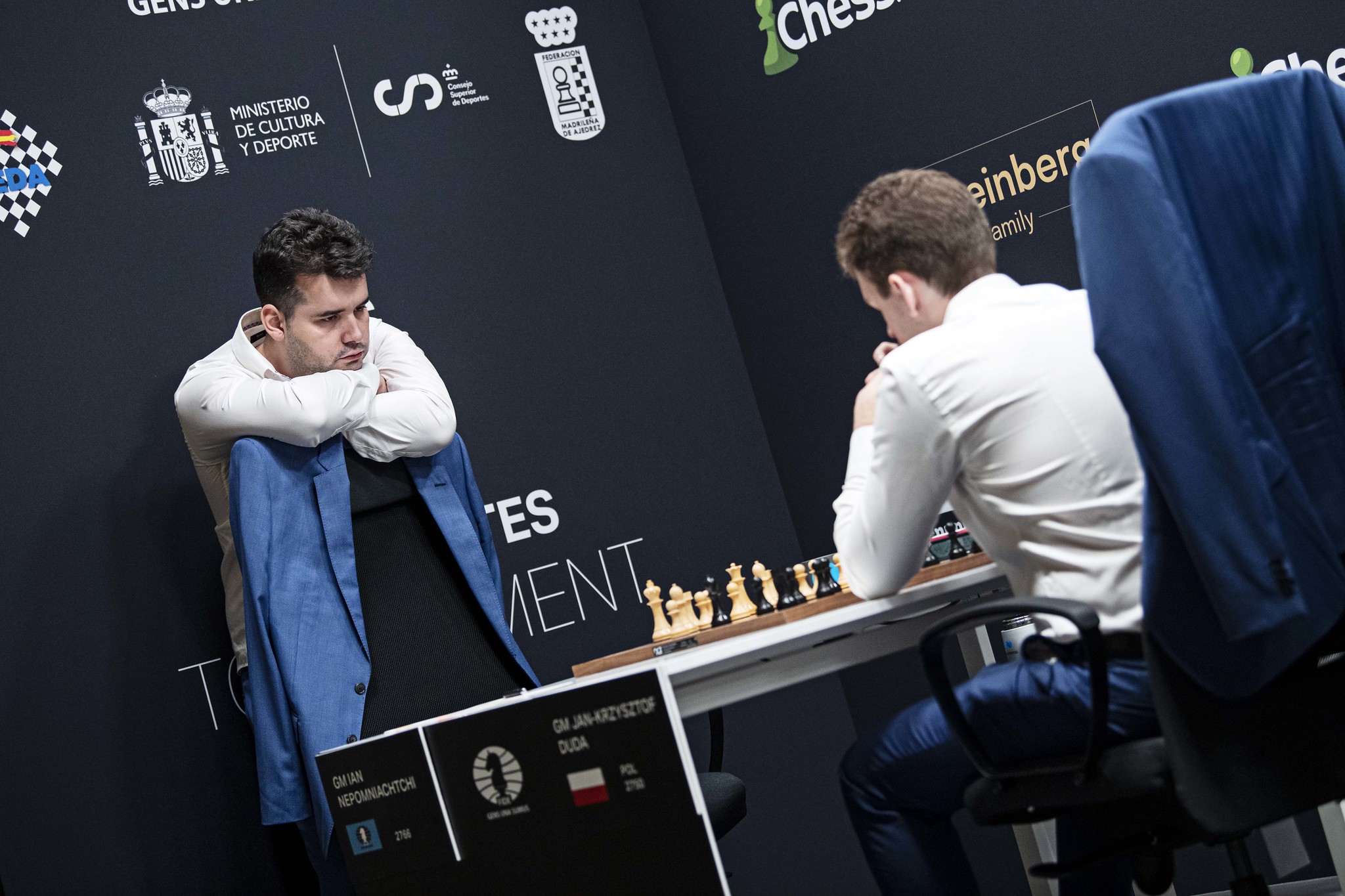 As the field at the 2022 FIDE Candidates Tournament heads into the second rest day, two chess players tower above the rest in terms of play and score. Ian Nepomniachtchi and Fabiano Caruana, Magnus Carlsen’s last two challengers, are shaping up to be the overwhelming favorites to win, pulling even further ahead of the pack with wins in round six.

There’s a lot of intrigue at play here. With Carlsen repeatedly floating the possibility of abdicating his title, potential winners are also viewed through the lens of how attractive their matchup would be for the Norwegian. Would he really change his mind against two players he’s already dispatched? There’s still a lot of chess to be played and lots of questions to be answered.

Once again, Rapport went with the Taimanov Variation of the Sicilian Defense wielding the Black pieces, a choice that has not yet backfired but has led to multiple sticky situations for him at this event. A messy and chaotic position emerged on the board where both kings had to sidestep direct attacks, forfeiting the right to castle.

Even after the simplification, the position remained unbalanced as Black had an extra pawn but a catastrophically damaged structure, with both king positions remaining extremely loose. Eventually, a position with bishops of opposite colors emerged, a type of setup that very often leads to drawn positions. That was supposed to be the case here as well: even though Rapport had two extra pawns to play with, the best result he could hope for was a draw.

Even that he almost managed to blunder away. The greedy 37. – Rxh4?? would have allowed Radjabov to get one of his rooks behind enemy lines and wreak havoc, turning the position into a winnable affair. But to the shock and horror of commentators, he somehow missed the retreating move 39. Bh2, lunging forward with his rook a little too early and ending up with a draw instead.

This was another catastrophic game for Alireza Firouzja, who was touted as one of the pre-tournament favorites but whose level of play has been consistently deteriorating as the rounds keep piling on. Time management has been one of the major issues that led to his recent troubles and that was the case again here against Caruana, leading to a horrific blunder that sealed his fate in one move.

Firouzja went for a surprising choice with the Catalan, an opening he’s almost never played before at elite-level events. The players were out of book after seven moves and it took the French youngster way too much time to figure out the emerging complications. He only had 17 minutes on the clock by move 19, with no tangible edge to show for it.

Then, a simple miscalculation occurred. He sacrificed an exchange with the idea of winning it back just a few moves later. The idea was all wrong though: after 22. – f5, he couldn’t recapture with the bishop to skewer the rook on d8 because the simple Qe8 would have lined up the two queens and allowed Black a crucial tempo to get out of the attack. Though Caruana didn’t find the optimal move to take advantage of this according to the computer, he easily converted the advantageous position and stayed apace with Nepomniachtchi.

This was an impressive display by both players in round six. Hikaru Nakamura brought some incredible preparation to the table but Ding Liren was able to solve the American’s homework over the board to maintain equality. Over and over again, he found the correct continuation in a 26-move string of questions that took Nakamura almost no time to put on the board.

It goes to show that preparing lines at the highest levels of play is not about finding forced wins or guaranteed advantages: the quality of play is too high for that. Rather, the idea is to pose lots of difficult questions in variations you don’t expect your opponent to have prepared for, at least not in the same depth as you have.

Here, Nakamura was dismayed to discover that Liren managed to match him blow for blow and maintain an even position. Though he may have had a few viable alternatives to 27. Rxa5, this logical and natural move led to a manageable endgame for the Chinese GM, and the heavy pieces exerted such overwhelming pressure on the board that Nakamura eventually bailed out with a three-fold repetition.

Here is his recap of the game:

Nepo dispatches Duda to keep the lead at the top

Another day, another win for Ian Nepomniachtchi, who’s having a scintillating event so far. He started with the relatively rare 1. Nf3 and steered the game into a sideline of the King’s Indian Attack (not to be confused with the King’s Indian Defense: chess can be annoying like that). In a masterful display of buildup, he slowly pushed up his pawns on the kingside and quietly improved the position of his pieces until Duda cracked and overreached, opening up a vital line of attack toward his king with 20. – hxg5?, a move that was the beginning of the end.

Though Nepo failed to find the perfect engine continuation—a line after 23. Qxb2, starting with Rc3 to force out d4 to close off a critical diagonal before lunging at Duda’s king—his inferior continuation also yielded him a bishop for two pawns, a huge advantage that was also too much for his opponent to handle. The players didn’t even make it to the first time control: Jan-Krzysztof Duda resigned on move 35 as it became clear that his king was caught in a devastating trap and wasn’t long for this world.

The field is slowly stretching apart as we are nearing the halfway point of the Candidates Tournament. This will be the last round featuring new parings. From then onwards, the players will be facing each other again, but with reversed colors.

Rapport’s play has repeatedly been described as “shaky” in this tournament, making it all the more surprising that this mercurial player only has draws to his name so far. This involved a lot of missed winning opportunities from both sides: after a strong showing against Caruana, Rapport got lucky to escape against Radjabov.

Still, surviving back-to-back Black games in this feat is quite important, and this even score already puts Rapport among the better performers in the event, at least up to this point. Enter Nepomniachtchi, the tournament leader with an astounding +3 score from just six rounds. Would he take a comfortable draw with the Black pieces against the Hungarian should it be offered to him before the game? Absolutely. Perhaps this will inform his approach. Then again, could two such creative and aggressive players really play a quiet draw?

Whisper it, but Nakamura has been quite impressive at this event so far, arguably the most so behind the two tournament leaders. Having displayed great preparation and calculation so far, and no apparent stamina issues just yet, the 34-year-old American had the best opportunity up until now to put a dent in Nepo’s progress. He wasn’t able to find a way to do so, though, but Duda has been an obliging opponent so far, failing to convert against Rapport and dropping the ball against Nepo in the last round. This might be time for Nakamura’s first win, and it certainly would be quite important to keep his chances alive.

The world No. 2 and No. 3 heading into the event, according to the ratings charts, have both been extremely disappointing at the Candidates so far. Firouzja displayed great ferocity and deep preparation in the opening rounds but he’s become uncharacteristically slow and sloppy since the rest day, culminating in the previous round’s loss to Caruana with the White pieces.

Meanwhile, Liren’s play is slowly but surely improving as the event goes along, including an impressive display against Nakamura. But missing the win against Radjabov is a sign that he’s also nowhere near his peak level of play. A draw between these two kneeling titans might be the most realistic outcome and the worst for both players involved.

Caruana will be going for a win. Radjabov won’t. Caruana has every chance of getting it done. A significant advantage in opening preparation, superior time management, and calculation skills: Radjabov’s not a free win but he’s very beatable and clearly not at the top of his game. A good result here would keep the pressure on Nepo and perhaps we’ll get to see if he checks out the board state when he’s walking by.