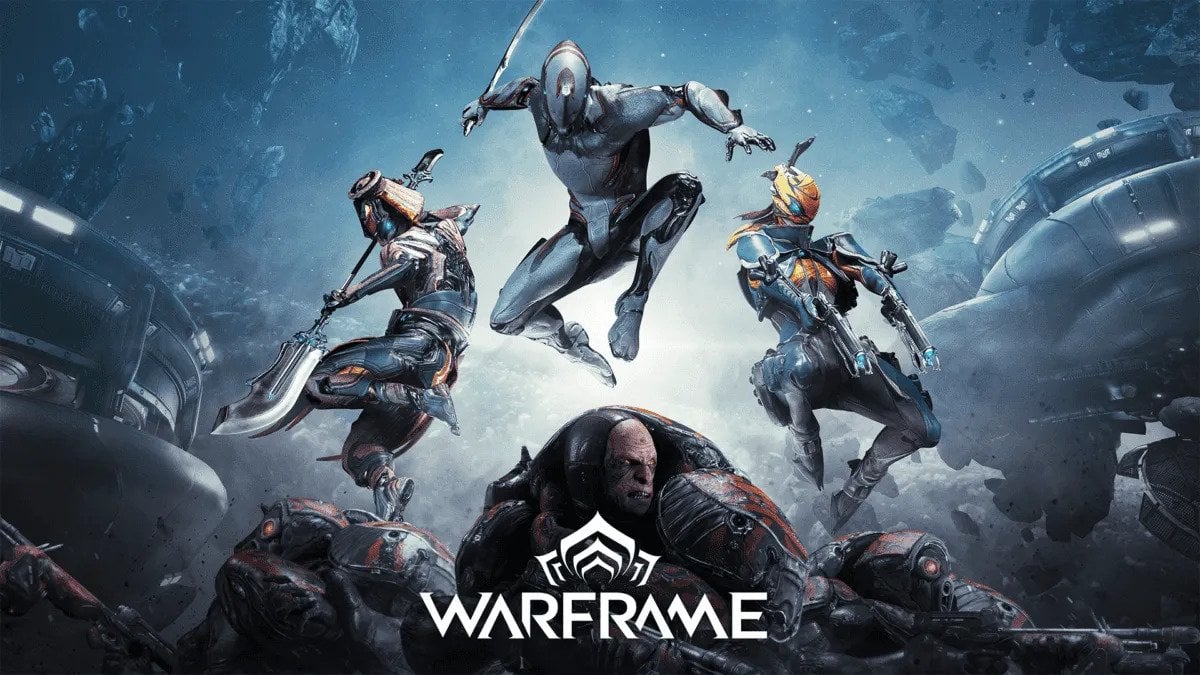 Warframe is a free-to-play action role-playing third-person shooter multiplayer online game developed and published by Digital Extremes in 2013. Warframe has players control members of the Tenno, a race of ancient warriors who have awoken from centuries of suspended animation.

They awaken centuries later, far into the Earth’s future to find themselves at war in the planetary system with different factions. To fight, these warriors utilize Warframes in battle. Each of these Warframes has its own specialty and role in battle.

With so many different Warframes to choose from, it becomes difficult for newer players to know which ones are best to use in battle.

As such, we have curated a list of all of the Warframes in the game in order of least to most powerful. This tier list starts off at the D-tier denoting the weakest Warframes all the way up to the S-tier where the strongest Warframes are.

Atlas is a powerful earth element user. His attunement with the earth allows him to summon earthen walls to defend him and earthen warriors to aid him in battle. After the warriors expire, they heal Atlas.

Banshee uses the power of sound to attack her enemies. Her piercing sonic attacks can tear through enemies and she can use sonic shockwaves to knock back her enemies. She can also channel sonic power into the ground to damage all enemies caught in the effect.

Garuda manipulates life force itself by being able to manipulate her own blood to regenerate her own energy. She can manipulate the blood of her enemies by drawing their blood into her, turning it into a damage-absorbing shield.

Grendel symbolizes gluttony in Warframe. All of his major attacks make him eat his enemies and fire them back out, dealing toxin damage to enemies. He can also regurgitate the contents of his stomach via projectile vomit, damaging all enemies around the AoE.

Hildryn focuses on her incredible tankiness to take down her enemies. She can create a shield for herself and her allies that reflects damage back at enemies that attack them. She can also steal the shields of her enemies to replenish her own and counterattack by firing bolts and rockets back at her enemies.

As his namesake, Hydroid is a water element specialist. His attacks use the power of water to barrage his enemies with a volley of water blasts. These attacks can be charged up to deal even more damage.

Nyx is a psychic mind controller who can turn enemies against each other. Her signature ability allows her to take control of an enemy and make them fight their allies, causing a lot of chaos in confusion in battle.

Vauban is a combat engineer who uses his tools to attack in battle. He can call down a laser artillery strike on his enemies and release drones that deal bursts of electricity damage.

Xaku is an amalgamation of lost Warframes. Their ability to manipulate the void is unparalleled and can infuse any weapon they fight with using void damage.

Zephyr specializes in using the air element in battle. She uses the power of the air to fly and can attack enemies on the ground by divebombing them. She can also fire large bursts of air at her enemies to damage them.

Ash is a ninja that focuses on stealth to deal high damage to his opponents. He can attack from a distance using his shuriken and from close range by teleporting to his enemies. If the situation turns bad, he can escape using smoke bombs.

Excalibur is a sword master and all of his attacks utilize his sword in battle. He can cut down waves of enemies and blind them in battle. He can also summon an ethereal blade that does additional damage to all enemies around him.

Frost, as his namesake, uses ice to his advantage in battle. He deals frost damage and applies the ice status effect on all his enemies. He can also fire out waves of ice and cause a landslide, all dealing frost damage and slowing his opponents.

Lavos is a serpentine unit that can bite his opponents. After biting them, he can heal himself. He is also incredibly fast, being able to dash through his enemies. This attack damages them while leaving a trail of cold behind to slow them down.

True to his name, Loki is a trickster. He can create a copy of himself to trick his enemies in battle. He can also go invisible, obscuring himself from his enemies’ view until it is time to strike.

Mag utilizes the power of magnetism to attack her enemies. She can pull targets to her and crush enemies from the inside. She can also use an EMP wave to weaken enemy armor and shields while replenishing her allies’ shields.

Nekros is a necromancer that uses the power of the dead in battle. He can control his enemies by turning them into his shadows or instilling fear in them, making them run away. He can also gain more loot than normal from the corpses of slain enemies.

Oberon is a powerful healer that can consistently restore his allies’ health. He can also leave the ground irradiated, dealing damage to all enemies that walk into the area. He can also smite his enemies, dealing AoE damage.

Protea uses gadgets in battle. Her most useful gadget lets her summon three orbs in battle. These orbs give her health, energy, and ammo. When it comes to her offensive potential, she can summon an artillery unit that deals plasma damage to enemies.

Valkyr is a berserker that fights using her bloodthirsty nature. She can fire a hook and pull enemies towards her or pull herself to the terrain with it. She can also slow down and stun her enemies while buffing her allies’ melee damage.

Baruuk is an evasive fighter. He can dodge melee and ranged attacks when he isn’t attacking anyone. He can also put enemies to sleep, disorienting them after they wake up.

Ember uses flames in battle. She can set her enemies alight by using fireballs. She can also block damage by coating her armor in flames. Ember deals massive AoE fire damage by slamming the ground and incinerating her enemies.

Gauss uses kinetic energy in battle. He can rush through enemies to deal damage and release a shockwave when he collides with an object. He can also absorb incoming elemental damage.

Harrow is a jack-of-all-trades fighter. He can convert the damage he deals into bonus health regeneration. He can also sacrifice his shields to increase his rate of fire in battle.

Limbo uses magic damage in battle. He can slowly damage enemies using rifts while suspending enemies and freezing them.

Mirage uses confusion in battle. She deals more damage in the light and is harder to hit in the shadows. She can also use illusions to distract the enemy and summon a prism that fires light energy in all directions.

Nidus uses viruses to fight his enemies. He can launch an infestation on his enemies that spreads and staggers them. He can also spawn maggots that slowly eat away at enemies and finally deal burst damage.

Revenant can convert enemies into allies by turning them into his thralls. He can also buff himself with armor that redirects damage back to his enemies while stealing their health and shields for himself.

Sevagoth is a reaper that can steal enemies’ health by planting a seed of death. He can also detonate the seed to deal blast damage and slow down enemies. He can curse enemies, allowing allies to heal themselves by attacking them.

Titania fights by applying a variety of debuffs on her enemies. She can either slow them down, blind them or greatly reduce their damage. She can also buff her allies with bonus damage.

Chroma is an elemental master that can use either heat, cold, electricity, or toxin. He can switch between them at any time in battle and each of them applies its own status effects.

Equinox can change forms between her day and night forms. Her signature ability gives her bonus damage and speed in day form while giving her bonus armor and shields in night form.

Gara uses her glass armor to blind and cut enemies. She can fire glass shards onto her enemies to damage them or onto her allies to buff them defensively.

Inaros is a mummy that can apply a variety of status effects on his enemies. He can steal health from enemies and blind them. He can also crowd control enemies in the sandstorms he creates.

Ivara is an archer that uses four types of arrows. She can switch between arrow types in battle depending on the situation. These arrows can either cloak her and her allies, distract enemies using noise, let her maneuver using ziplines, or put enemies to sleep.

Khora is a formidable fighter that brings her pet into battle. Both of them can attack independently and her pet can also revive Khora when she dies. She can also trap her enemies by ensnaring them.

Nezha is a fire-element wielder. He can launch flame attacks on his enemies in the form of projectiles or chakrams. If they die to this ability, they drop orbs of restoration. He can also envelop himself in flames, dealing stun damage to enemies.

Rhino is one of the best frontliners. He takes reduced damage from his enemies while buffing his allies with bonus damage. He can also stomp the ground dealing blast damage in an AoE.

Volt is the strongest electricity user. His attacks can bounce to various enemies, dealing shock damage. He can also block ranged attacks from enemies with his shield. If surrounded, Volt can paralyze all enemies around him with an electric blast.

Wukong is one of the best crowd controllers. He can summon a clone of himself that alternates between melee and ranged damage. He can also build up all the damage from an enemy and fire it back at them.

Mesa is the most powerful gunslinger in the game. So much so that exclusively using guns gives her a huge health boost. Her signature ability lets her buff her allies with a damage boost while jamming enemies’ guns.

Nova uses antimatter in battle to launch homing projectiles that chase enemies. She can teleport away from danger using wormholes and can fire off a retaliatory blast of damage to enemies that knock her down.

Saryn is the master of inflicting status effects. This is because she can inflict a variety of status effects and they all last 25 percent longer when Saryn applies them. Her signature ability does double toxic damage while applying a toxin status effect on her enemies.

Trinity is the best healer in the game. Every ability that she possesses can heal herself and her allies, maintaining a sustained push in all teamfights.

Wisp uses portals to maneuver around the battlefield and attack. She can create an illusion of herself which can be used as a portal to teleport her to the illusion. She also uses portals to channel the sun’s energy onto her enemies and damage them.