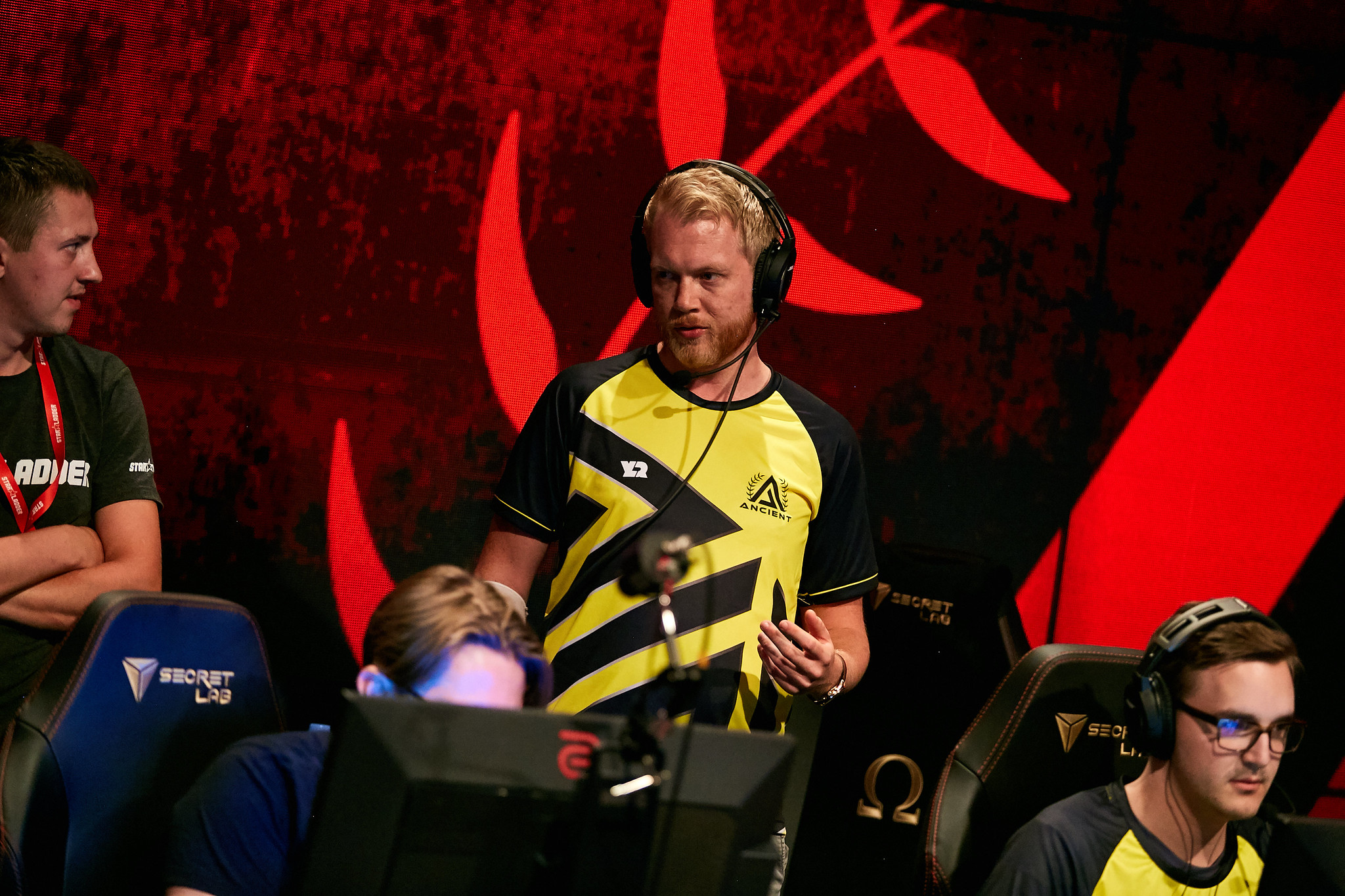 Guild Esports is moving into the 2021 competitive VALORANT circuit with a full roster after bringing in former CS:GO pro André “BARBARR” Möller to lead the team as a coach.

These five players have competed in VALORANT for varying amounts of time. They played together as part of their old Bonk stack or in brief stints with Ninjas in Pyjamas. This will be BARBARR’s first run at coaching after swapping over from CS:GO, and he’s being thrown into the thick of things. The team has already competed in Red Bull Home Ground and is currently playing in the EU VCT Challengers.

Ahead of the team’s games at Red Bull Home Ground where they prepared for Challengers, BARBARR spoke with Dot Esports about his biggest challenges swapping to VALORANT, how the pandemic has affected his work, and expectations for Guild moving forward.

What got it into your head that you might have wanted to switch from the game you had been involved with competitively since around 2008 to this new game that is just hitting its stride almost a year in?

BARBARR: Since I stopped, or actually even when I was playing, I was kind of considered a talent developer, which for me at least means, you would never reach the top if you didn’t have a club that is ready to support you and not let go of players when money comes into question. That was something I didn’t have when I was playing so I just kind of made money for others and had to restart my projects every time.

And yeah, I do think that I did great in that and provided some great talents to our top two, Fnatic and NIP, but in the end, I had higher ambitions. Of course, you know I wanted to be number one.

As a player specifically, I think I had the knowledge but maybe not the skill to be an absolute tier-one level, and that was something I kind of accepted. I stopped playing maybe a little bit before I should have because I felt like my leadership and my knowledge at the very least would take to that tier. That was my absolute goal and my vision.

So after the NIP signing didn’t go through, after I coached [Team] Ancient and [Björn “THREAT” Pers] says he can be the coach. I do think that THREAT is the best Swedish CS:GO coach in my opinion, but it was just so hard to swallow because I was so close to signing and everything, but it fell through you know, and that’s how it is.

So I coached a Spanish team just to get some experience because you know it’s not the same. Like, it isn’t super different if you have been in-game leading and go to coach, you just need to stop talking a little bit. I just felt like I needed more experience working from the back because when I was with Ancient I was almost in-game leading at the same time as coaching, which won’t work in every tournament.

I felt like I learned a lot in my year with Wygers and had some interesting coaching offers in Counter-Strike, but I felt like it was time after all these years to try something new. I thought about those offers a lot because Counter-Strike will always be my first love, but after considering it and talking to Guild and all of the amazing people around the team, I decided to just jump. Sometimes you just gotta jump in and see where it takes you.

In terms of teams, you have only been a part of Guild for about a week now, at least officially. How has it been like transitioning so quickly from CS:GO to VALORANT, not to mention trying to prepare the team for Home Ground?

It has been going pretty fast. I was actually working with the guys in December also but it is fast.

I still have a lot to learn, I mean, these guys have been sitting and practicing. You understand right? Ranked is good, but it is very different from practice, so I still try to learn a lot so I can make input from what I understand. And while it has been fast, it’s exciting at the same time. It puts me in a spot where I need to learn as quickly as possible.

Right after the Red Bull Home Ground tournament, we have the Champions Tour Challengers also. Even if it’s an excuse and there is little time, I don’t want to use that at all. My time has been trying to learn as much as I can about the game. But I cannot deny that it is very quick before the next tournament.

I think that in every round there is a lot more to consider. Like, what else do the enemies have, what abilities do they have, there are just a lot of additions to it. Like the ults and abilities, of course, if they have any power abilities ready to use.

In Counter-Strike, it’s kind of easy reading what the enemies will do when, for example, we are in anti-eco, eco, pistol rounds, and stuff. I think that’s all fairly simple to read in CS and you have time to prepare for it even if something goes wrong. In VALORANT it is just more, like the anti-ecos are less of a given or there are less rounds so pistol rounds have become more crucial again.

You have fewer areas for mistakes and counting the abilities also, there is never like a super given round like in Counter-Strike when it is a four-v-two. Don’t get me wrong, it is still a high percentage of winning, but you will need to remain hyperfocused depending on what your enemy and teammates have.

I would say the concept is the same. Of course, you’re planting the Spike, you’re taking the map control and stuff, but it’s just that it can switch so much faster than it can in Counter-Strike at choke points. That for me is some of the biggest changes, along with abilities and ultimates.

Does a meta that changes more frequently compared to CS:GO add more to your plate? What methods do you use to stay on top of it from a coaching standpoint?

I mean, Riot will patch a lot. I think they will come with a lot of patches that will change the game a lot. I mean, just their switch up on Split for example was game-changing. They opened up a bit here and bit there, but it is game-changing in the end for how you are playing the map. In CS:GO it hasn’t been like that, ever.

VALORANT and Riot are patching a lot so that means there will be a lot of changes, like how they opened up Split. It will change how you’re playing on the map. So in terms of adapting and stuff like that, you have to be on top all the time with the patches, because it is changing a lot every time.

I have played a lot of League of Legends too and dude it was the exact same over there. They have the same concept and there will be a lot of changes in not a long amount of time. That means you just gotta stay on top of it and try to adjust.

Who’s the most coachable player on the roster? Who channels your messages the best?

I think all of the players are coming from a Counter-Strike background except for bonkar. They understand the rotations, the small timings, and stuff like that very well—all of them. That is why they are so good at this game. For most coachable, I’m not sure. I do think that all of them are listening to me pretty well. Yeah, I will put it like that.

But still, I’m not the guy who wants to come in with history from Counter-Strike and say “you gotta listen to me, I did this and this,” or whatever. That is not me. I want to show them that I am here to be a VALORANT coach. So until I have all of the knowledge, I don’t expect them to listen to everything I say right now. That’s just reality.

When I have the knowledge and I can be the most effective for my team, then I will request them to listen to me. But right now, It’s a learning curve and we are trading knowledge back and forth.

Has the global pandemic influenced or altered your coaching methods? What’s been the biggest change?

Yeah, yeah. I’ve been living in Spain now for two years and over here, it was almost the epicenter of the pandemic for awhile. For me, I am working online and I have a mini-gym. I try to go out when I do my cardio and run outside because you can do that in Spain all the time of the year, so it hasn’t changed all that much for me in general

In terms of when I’m coaching, what I would need most of the time is boot camps because that is when you meet the players, when you talk to them face-to-face instead of just hearing their voice all the time. Stuff like that is hyper important, but all we can do is adjust to what’s going on in the world right now and make the best of it.

What’s a realistic goal for Guild Esports heading into the VALORANT Champions Tour?

The goal for Home Ground is to get warmed up for the Challenger qualifiers. We can’t give everyone everything a week before the most important qualifier of the year, you know, for me that doesn’t make sense.

We are going to take Home Ground as a warm-up and as a chance for me to see first impressions of the players during stress and press. I could end up working a lot more because that’s when you see the true colors anyway. Super exciting. We will do our best in Home Ground and at Challengers. Guild wants to win. Simple as that.