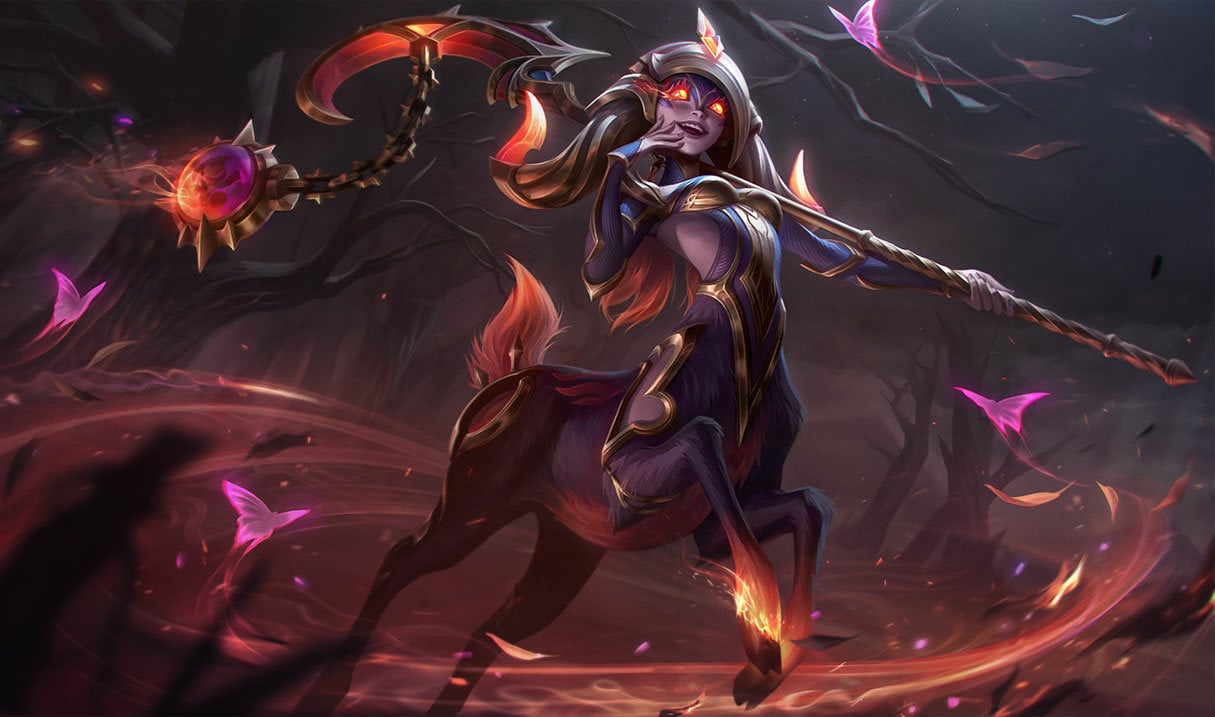 The Cavalier class is back in Teamfight Tactics Set Seven Dragonlands set with new champions and is ready to charge enemies while increasing their defenses.

Many compositions need a strong frontline so main carries have time to deal damage. The Cavalier trait from Set Seven Dragonlands works very well as a frontline. All Cavalier champions have an innate ability that allows them to charge towards their target whenever they move.

According to Stephen “Mortdog” Mortimer in his Dragonlands PBE Rundown, this iteration of Cavaliers “should be a healthier version”, as they no longer receive damage reduction, allowing more counterplays from enemies that have items or abilities that lower their stats. Last Whisper is a popular AD item that could appear in every lobby and has the unique effect of “Dealing physical damage reduces the target’s Armor by 70% for 5 seconds. This effect does not stack.”

Set Seven Dragonlands champions with the Cavalier trait are Sejuani, Lillia, Nunu, and Hecarim. It is possible to increase the number of Cavaliers on your board by using either a Cavalier Emblem with a Spatula or by receiving one of the following Augments of the Set Seven Dragonlands: Cavalier Heart, Cavalier Crest, and Cavalier Crown. All of them grant a Cavalier Emblem or make your board work as if it had one more Cavalier.

How to Use the Cavalier trait in Set Seven

Sejuani is one of the most versatile starting units in the Set Seven Dragonlands, thanks to the Origin Guild which makes it grant extra health to the entire board even if only Sejuani is present. Finding other Guild units can greatly strengthen the comp with Cavaliers. Ryze is a champion with the Mage and Guild traits that if he is together with Lillia and another Mage will grant an ability power bonus and make Lillia cast her ability twice, being able to become the main carry of the comp with good AP items. A comp with Lillia carry can benefit from the Scalescorn trait by adding a champion like Braum or Olaf, but there must not be a Dragon on the board for this effect to activate.

If there are more attack damage items available, a good option is to build a comp along with one of the attack damage classes, Swiftshot is a great option because the addition of Twitch, also increases the Guild trait with Sejuani. Ragewing, Scalescorn, or Mirage also have good carries to use AD items at different times in the game.

Senna is good at dealing with area damage and is present in the initial moments, being able to hold items to transition the comp later. Olaf can be a great carry especially if found in the early stages of the game, his skill increases his AD infinitely each time he dies. Yasuo is a good unit for the late game that activates the Mirage feature shared with Nunu, he can also have his items held by Yone earlier in the game.

Your tank items will find a good place in the later parts of the match alongside Nunu or Hecarim both has great defensive status. The best items for them will be both Warmog’s Armor, Bramble Vest, and Dragon’s Claw. Bramble especially against heavy AD lobbies, and Dragon’s Claw for heavy AP lobbies.

When it comes to adding Dragons to a composition, TFT Set Seven has good options for the roles that need to be fulfilled. As Cavaliers are primarily a defensive trait, Dragons focused on dealing Damage are recommended, unless you’re running a composition with the Scalescorn trait that cannot have a Dragon on the board to activate its effect.

On the other hand, there are good dragons that benefit from damage items to wreak havoc on enemies.

Ao Shin is a tier-five dragon that activates the Tempest trait. The dragon itself provides massive AOE damage but takes time to ramp up, as the Tempest trait. Both are perfect for a comp full of tanky Cavaliers that will buy time until the lighting strikes, both for the Ao Shin ability Lighting Rain and for the Tempest trait start to fall on the battlefield. His best items are a mana item like Shojin and AP items to deal tons of damage.

Aurelion Sol plays a similar role to Ao Shin, dealing more damage each time he casts his Black Hole ability, which also spread more with each cast hitting more enemies. However, at the point where he appears, the player will benefit little from activating the Astral trait, which is very strong at the start of the game with its rerolling capabilities and extra gold with time.

His items are also made up of mana items like Shojin and other AP items.

Daeja and Shi Oh Yu are good options if there are AD items. Daeja benefits a lot from attack speed, so a Guinsoo Rageblade is very welcome. Other attack speed items like Statik also work well and an item like Titan’s Resolve allows Daeja to survive longer. Activation of the Mirage trait will vary from match to match. Electric Overload and Duelist’s Dexterity should be the best for Daeja. Shi Oh Yu benefits from similar items but is less focused on attack speed. Titan’s Resolve is the best choice to increase your survivability. Bloodthirster is an offensive option along with Infinity Edge. Her Jade Rush ability has a lot of crowd control and the longer Shi Oh Yu is in combat, the more damage her comp will allow to deal.

Cavaliers are a trait with good defensive attributes and because of that it is well used as a source of tanks for powerful carriers. Often combining Hecarim with another Cavalier form a good front line.

Daeja is the center of this comp as the main carry and is supported by the Mirage trait. Hecarim and Nunu form the front line and, depending on Mirage’s effects, it is possible to make some changes to optimize the comp. Ensuring good items for Daeja or copies of Yone and Nunu are good reasons to use this comp. The best upgrades are Mirage Heart, Hallucinate, and Mirage Crown.

Priority for the first carousel is Recurve Bow followed by Needlessly Large Rod.

The best start of the game is to be able to place a Leona next to a Yone to activate the Mirage trait and activate other traits from them, such as Guardian with Braum or Thresh or Warrior with Aatrox or Shen.

With a strong board, it is possible to level up to four before the first PvP round and try to follow up with a winning streak. Otherwise, a losing streak can help keep the economy going. Getting a Nunu in the early stages means being able to exchange Warrior bonuses for Cavalier or Bruiser by adding units like Sejuani or Tahm Kench. Shen would be great in this scenario to activate both Bruiser and Warrior.

The two main carry options for the early game are Yone and Nunu, both of which can be equipped with items that will be passed to Daeja and Hecarim in later phases, so it is necessary to keep extra copies of them on the bench.

Level up to six in round 3-2. Add more Mirage and Warrior or Cavalier/Bruiser units depending on who is doing more damage, Yone or Nunu. This comp has a big power boost at level seven when Daeja enters the field, so there’s no need to worry if you’re losing at this point in the game.

Level up to seven in round 4-1. Roll until you get Daeja and transfer the items. This is a good time to have Hecarim and Nunu as a front line, Ornn is a second option if Hecarim is being played by the lobby. Once you stabilize your board saves gold to reach level eight and finish composing with Yasuo. The other support units can be Lulu and Bard, helping with magic resistance and finding more copies of high-cost champions.

The best items for Daeja are Guinsoo’s Rageblade, Statikk Shiv and Quicksilver. The tank items for Nunu or Hecarim are Warmog’s Armor, Redemption, and Bramble Vest. Morellonomicon is also a good option in Hecarim if there is a lot of healing in the lobby. Finally, Yasuo may receive possible spare items.

The effect of the Mirage trait changes every match and its different effects can allow for changes in comp. Duelist’s Dexterity grants more Attack Speed. It is possible to trade Rageblade in Daeja for more damage such as Giantslayer, Statikk Shiv, Jeweled Gauntlet, or Infinity Edge.

Dawnbringer’s Determination grants a heal for up to 50 percent Health once per combat. Going after a three-star Nunu with Warmog can be game-changer, in which case don’t equip Hecarim with the items and leave them on Nunu.

Electric Overload has the effect of when attacking or being hit by an attack champions gain a chance to deal 8% of their maximum Health as magic damage to adjacent enemies. A good choice for tanks and allows you to swap Yone for Leona for your final board.

This composition is similar to the Daeja carry but revolves around three-star Yone and having him as the main carry. Yone is very flexible about his items so the best items for him are not a priority. Useful enhancements to this comp are Hallucinate, Tiamat, and Trade Sector. And the best Mirage effects are Spellsword, Warlord, Electric Overload, Duelist, and Executioner.

The best start to the game is getting to position Leona and Yone to activate the Mirage trait along with Braum to activate Guardian and Aatrox to activate Warrior. With a strong board, it is possible to level up to four before the first PvP round and try to follow up with a winning streak. However, a losing streak strategy is usually more stable for a reroll composition.

Level up to six in round 3-2. The best units to close your board at level six are Olaf and Shen. The extra damage from four Warriors will offset the gold reserve. From the moment you are above 50 gold, you should roll looking for Yone. It is also possible to try to put Taric, Leona, and Braum at three stars if copies of any of them are appearing naturally.

Once you get the three-star Yone you can go up to level seven. Save gold to move up to eight and complete the transition to the final board.

Yone’s items are flexible and he is a champion that will do well with Rageblade of Guinsoo, Quicksilver, Titan’s Resolve, Giantslayer, Hand of Justice, Deathblade, Bloodthirster, Rapid Fire Cannon, Edge of Night, Runaan’s Hurricane, Hextech Gunblade, and Statik Shiv.