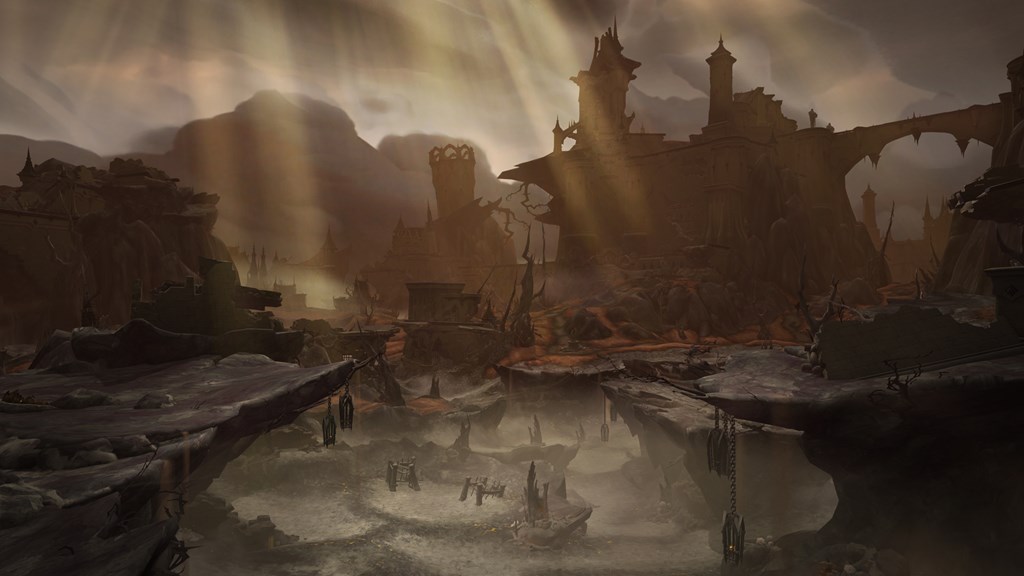 World of Warcraft players from across the globe gathered around their computer screens this morning for an update on the game’s next expansion, Shadowlands. The informative charge was led by WoW executive producer John Hight and game director Ion Hazzikostas.

Hight also showcased the Shadowlands collector’s edition. The special collector’s edition costs $119.99 and includes a number of exclusive goodies inside the box and in-game. With regard to physical content, the collector’s edition will include an art book, a mouse pad, a digital copy of the game’s soundtrack, a game code, and four pins based on the upcoming Covenants feature.

As far as in-game content is concerned, this edition will also include a character level boost, 30 days of game time, an exclusive pet, an exclusive mount, a special cosmetic effect for your Hearthstone bind location, and a quest line that grants an exclusive transmog. If you’re into collecting, there’s plenty of content included with this edition that can justify your purchase.

After debuting the collector’s edition, Hight went on to announce the debut of the much-anticipated Shadowlands beta. This is a big deal to the community because it will give more players than those who were invited to the alpha an opportunity to test the game’s new systems. The more feedback the community can provide, the better the game can potentially be at launch. Shadowlands will officially enter beta sometime next week.

Hight then brought on Hazzikostas, who gave a brief overview of the progress made during the alpha. Hazzikostas stressed the importance of feedback and thanked the community for helping so much already. He also revealed that the team decided to remove all time gating from the upcoming Torghast feature based on player feedback. Hazzikostas stressed that the class teams are listening to feedback and that players can expect to hear more back on that front as well.

Hazzikostas then gave fans more information about what players can expect to do in their Shadowlands endgame loop. This is arguably the most important part of an expansion because this is how players will be spending most of their time at the max level. One feature players will be interacting with in the endgame is the Covenant system. Players will choose one of four Covenants, which all come equipped with unique abilities and Soulbinds.

Soulbinds go hand in hand with a new item called Conduits. These will essentially do what Relics did for an Artifact Weapon in Legion, but for the Soulbinds tree. Conduits are spec-specific, but Hazzikostas said swapping Conduits won’t be a hassle. The idea behind the mechanic is to allow you to play how you want to play at any given moment.

Fans also learned about the progression system for Covenants called Renown. You’ll earn Renown on a weekly basis by going out into the world and gathering a new currency called Anima. You can also gain Renown by going into the Maw and rescuing tormented souls from your Covenant that were cast into it by mistake.

Each covenant will have a Sanctum. This will be the base of operation for the Covenant. Hazzikostas said fans can expect to begin and end most gameplay sessions here once they get to the max level. As they adventure throughout Shadowlands, they’ll also be working toward upgrading their Sanctum. As they bring Anima back to their Sanctum, players will be able to use it to upgrade their Covenant’s land, granting them quest and other world content in the area based on which nodes they choose to activate.

Hazzikostas also showcased a new type of mission content called Adventures. These are expected to be the most improved version of the mission table mechanic. Adventures will be available on the mobile companion app too, which will be updated for Shadowlands at the time of the expansion’s release.

In addition, Hazzikostas revealed a new Shadowlands Dungeon called the Theater of Pain. This dungeon takes place during an event that Hazzikostas described as a regularly-occurring battle royale where the houses of Maldraxxus send their greatest champions to fight it out. This dungeon reflects the mantra of Maldraxxus, “Might is right.” Hazzikostas also said fans can expect the dungeon to look “super metal.”

Later this month, players in the beta will be able to experience the new Castle Nathria raid. Additionally, Shadowlands Mythic+ Keystone dungeons will be available later in the month. Hazzikostas said it’s important to get these features into the hands of players early so they can give as much feedback as possible.

Players will also be able to take a look at Legendary Runecrafting. This new feature will be spearheaded by a mysterious new NPC who players will meet early on as they adventure into Torghast. Hazzikostas described the NPC as a mysterious Runesmith who’s chained up and shackled in a Hannibal Lector-style cell.

Hazzikostas said this Runesmith wields the same type of power that was once used to craft Legendary gear, like Frostmourne and the Helm of Domination. By recovering certain currencies from Torghast, the Runesmith will be able to make a Legendary gear for players. This sounds much more controlled than the chaotic way players gained Legendary weapons during Legion.

Based on what we’ve seen so far, Shadowlands is shaping up to be one of the most unique expansions in WoW’s history. If you don’t think you can wait until the fall to check out Shadowlands, you’ll need to be lucky enough to make it into the beta starting next week.