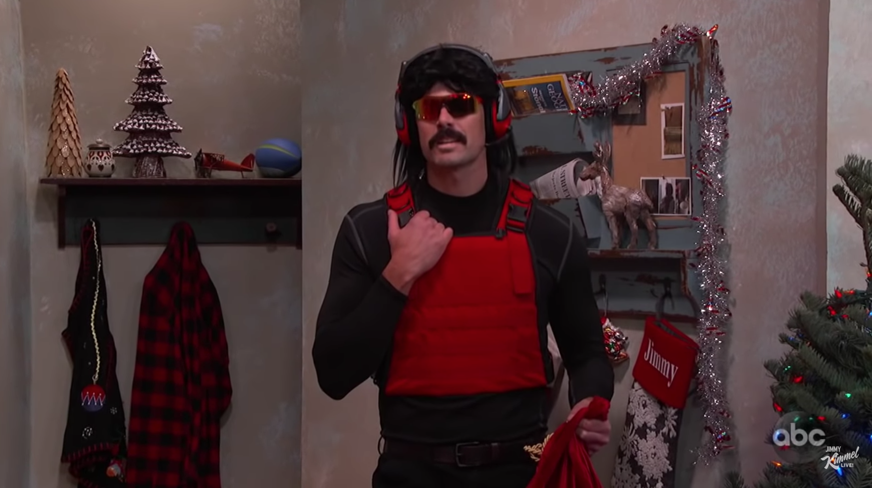 Dr Disrespect showed his holiday spirit this week in an appearance on ABC’s Jimmy Kimmel Live as a part of an advertisement for Turtle Beach.

In a skit where Kimmel and his sidekick Guillermo Rodriguez act like they’re going to sleep the night before Christmas, Dr Disrespect breaks into the house with a bag of goodies, much like Santa Claus might.

After exchanging some jokes with Kimmel by talking about how Santa Claus is “creepy” for breaking into homes and watching children, the Doc begins to explain his benevolent plan to provide Turtle Beach headsets to people all over the globe.

“The only thing we need to fear is subpar gaming equipment,” he said. “That’s why I’m flying around the world upgrading good little gamers to these Turtle Beach headsets. They’re perfect whether you’re a pro player or a little baby precious noob.”

Kimmel uses that opportunity to engage in some self-deprecating humor. “That’s us,” Kimmel said. “We’re baby precious noobs. We’re a couple of noobs.”

Dr Disrespect’s appearance on behalf of Turtle Beach comes after more than a year of repping his own special edition Turtle Beach headphones on stream. He also has deals with Scuf Gaming and G Fuel advertised on his channel.

In a tweet last night, the two-time streamer of the year explained that he couldn’t make it to The Game Awards because he “had a few deliveries to make” and tagged Kimmel’s show.