Oh boy, this one came out of nowhere. 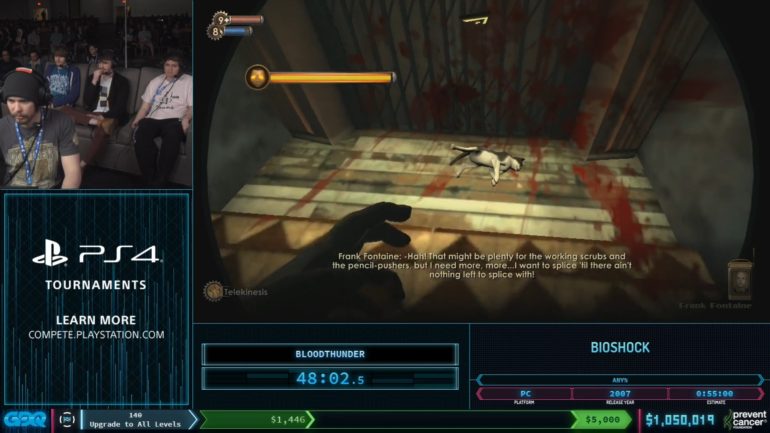 Just when you thought the heat on Natalia “Alinity” Mogollon had cooled off, one of Twitch’s biggest charity streams called attention to her behavior.

With over 100,000 viewers tuned in to Awesome Games Done Quick 2019, speedrunner BloodThunder fired up the stovetop for a quick roast of Alinity last night while finishing off a stellar run of BioShock, the classic horror FPS from 2007.

Nearing the end of his run, BloodThunder picked up a dead cat with some telekinesis and gifted it to the Little Sister character, but not before dropping a bomb on Alinity.

“I think she’s earned a pet,” BloodThunder said of the Little Sister. “Gotta make sure we give it a bath. The thing is, if you’re gonna have a pet, you gotta take care of it, you know, you don’t wanna be like your favorite Twitch streamer and just throw it around.”

He was referencing, of course, the infamous moment last summer where Alinity threw her cat over her head because it was stepping on her desk while she was playing a game of Apex Legends. The Twitch community saw clips of the event and called for her ban, but nothing happened.

Once it set in what BloodThunder said, the looks on the people on the couch behind him were priceless. The person in the middle knew right away what he said was a big-time burn and reacted accordingly.

It was a stellar roast, simply because BloodThunder never mentioned the streamer by their name. But with all of the outcry against the streamer for her antics and complaints against her for animal abuse, everyone in the room and most people watching the stream knew exactly who he was talking about.

Many viewers are still frustrated with Alinity, who’s caught the eye of many for negative actions on several occasions, but has somehow avoided a ban every time. In another clip, she was seen feeding her cat alcohol from her mouth.

BloodThunder, meanwhile, is a speedrunner of over 50 games including BioShock and even has the achievement of beating 210 different games in a single month.