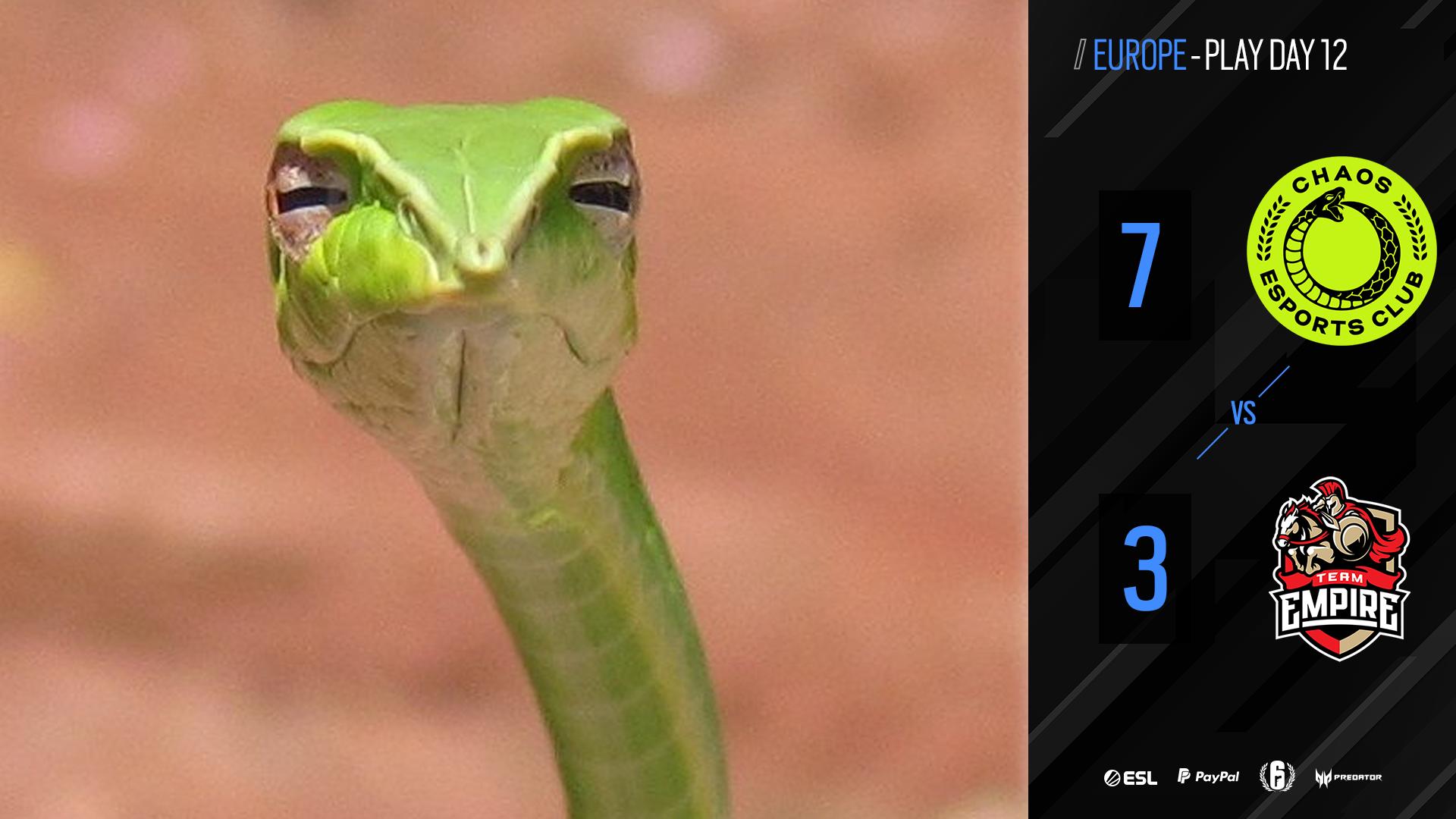 Seventh-ranked CHAOS bested third-ranked Team Empire 7-3 today in a massive upset during matchday 12 of the EU division of the Rainbow Six Pro League.

Today’s win gives CHAOS a brief respite from a relegation slot, pending the outcome of the PENTA vs. GiFu matchup. CHAOS, PENTA, and GiFu are all within striking distance of one another, but if Aleks “VITO” Lyapun and Rickard “Secretly” Olofsson continue to perform like they did today, then CHAOS may be safe for another season.

None of the teams at the bottom of the board have any delusions of being able to make it to Japan at this point, but that doesn’t mean they aren’t trying to spoil other teams’ fun. CHAOS’ win today over Team Empire denies Empire three crucial late-season points. Without even getting one point in the matchup, Empire find themselves unlikely to make Japan if G2 Esports and Giants Gaming win their matchups later today. While qualifying for Japan is still a possibility for Empire, the “Russian Machine” is halfway reliant on luck going forward.

VITO was a key player in playing spoiler to the likelihood of Empire’s Japan dreams. Posting 12 frags and three deaths, according to Siege.gg, VITO was a clear leader in taking down Empire. Likewise, Secretly had 11 frags but was taken out of the action seven times overall.

VITO was a continuous point of strength for CHAOS, frequently coming in clutch on defense with his strong Smoke holds. Combining VITO’s Smoke holds and Secretly’s smart Maestro angles made it possible for CHAOS to gain a healthy lead going into the half.

Secretly’s Maestro holds were impressive. Holding Sunset from Blue Bar with the Alda 5.56 was crucial to winning some dire situations on defense. In fact, Secretly’s Maestro hold was so strong that broadcasters Michael “KiXSTAr” Stockley and Devin “mzo” Becker questioned whether the Alda was overpowered. Either way, there’s no denying the integrity of the strat and Secretly’s ability to do his job when it counted most.

Even a draw in this matchup would’ve impressed fans. CHAOS have been stuck in a bit of a rut in the second half of season 10 of the Rainbow Six Pro League, so fans of the organization are likely happy to see them take down another powerhouse team. While VITO and Secretly led the way, everyone on the CHAOS roster looked hungry today—or at least hungrier than Empire.

CHAOS’ win leaves room for G2 to take a narrow hold of second place in the division. If PENTA lose in their matchup with GiFu, then CHAOS will be primed to stay out of relegation this season.