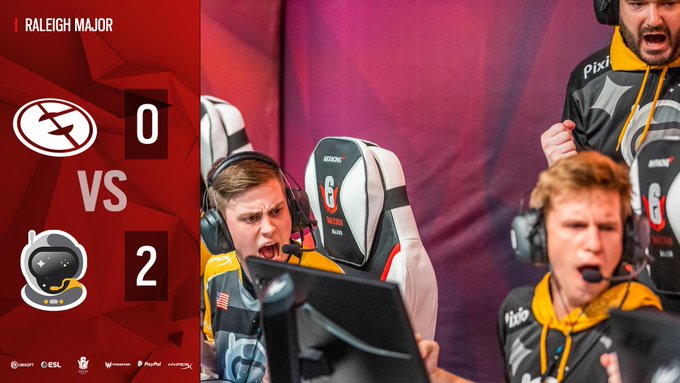 Spacestation Gaming were met with some criticism when they were announced as the host country invitee for the Six Major Raleigh last month. But they’re quickly proving to be the North American team to watch at this event.

After a dominant show of force, SSG swept North American favorites Evil Geniuses 2-0 today to grab the first seed in their group and a spot in the playoffs.

Many fans were upset by SSG getting the host country invite over fellow North American squad Team Reciprocity. The criticism came after rumors circulated that the criteria for the invite was based on “performance overall,” which would’ve meant that Reciprocity should’ve earned been picked to play at this tournament. But SSG took those criticisms and handed them back to everyone who doubted their worth.

After taking a convincing win over the second-ranked European squad Giants Gaming, SSG moved on to sweep EG in their best-of-three matchup. It’s surprising to see Evil Geniuses get swept in a LAN environment, and the fact that SSG set EG on the path to elimination is pretty insane.

SSG won Kafe, their map of choice, but they also swiped EG’s map pick to seal the deal. The closing round of ClubHouse was a flurry of frantic mistakes on EG’s side. It was surprising to see Troy “Canadian” Jaroslawski grenade himself out of the match in the closing moments.

With their win over Evil Geniuses, SSG are the North American team to look out for at the Six Major Raleigh. DarkZero still have to get through their matchup with forZe, but even if DZ are successful, it’ll be a more expected victory than SSG’s win over EG.

For a team that’s notorious for drawing against opponents during the regular Pro League season, SSG look hungry enough to take it all. EG have another shot to stay in the tournament with their tough matchup against Giants Gaming.

The Six Major Raleigh will continue throughout the week. Fans can catch the official broadcast here. Additionally, fans can also find the Bravo broadcast here.