It’s kind of a funny story. 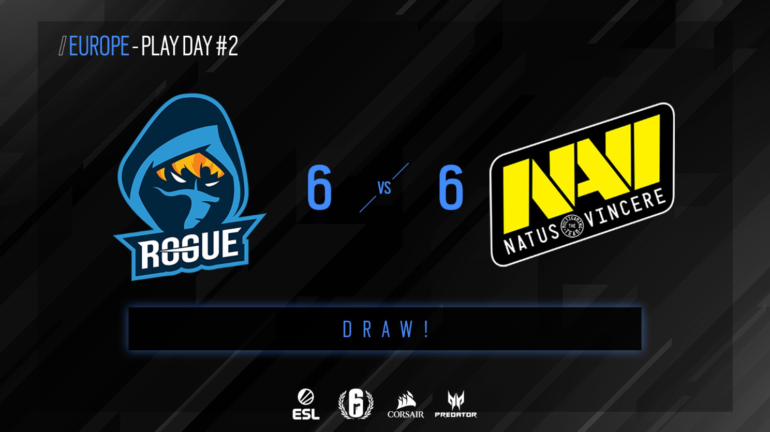 After the historically North American based organization Rogue moved to the European division of the Rainbow Six Pro League earlier this week, many fans thought the org would be free of draws with its new roster. This wasn’t the case today, though, since Natus Vincere handed the org its first draw in its new division.

The former Giants Gaming roster was acquired by Rogue at the onset of season 11. This roster previously dominated the division in season 10 until Na’Vi won it all at the Pro League Finals. Rogue were previously relegated to the Challenger League following the close of Pro League Season 10’s North American relegation matches. Prior to being relegated, Rogue suffered a disappointing 2-6-6 record during its final season in North America. The draw-heavy record is undoubtedly a factor in the organization moving over to the European division of the Pro League.

Now, in an ironic turn of events, Rogue picked up its first draw in its new division. Na’Vi provided healthy opposition to Rogue in their matchup on Consulate before things fell apart for the season 10 champs. Rogue’s defensive rounds didn’t go so smoothly and the same can be said for Na’Vi, which is why these teams eventually fell into a draw, albeit with a little help from a massive oversight on Rogue’s end.

Unfortunately for Rogue, the team somehow failed to recover the defuser in a three-vs-one man advantage. This mistake led to Na’Vi’s Luke Kendrew just running around the map, avoiding Rogue attackers. While certain things can be forgiven considering that it’s only matchday two, this oversight screams rookie mistake. But the org seems to have a sense of humor about the situation given the above tweet.

Today’s draw also serves as a bit of a blasé milestone for Na’Vi since it marks the roster’s first draw in the Pro League. Last season, Na’Vi earned a strong record of 10-0-4 that solidified them as Europe’s top squad. Drawing against season 10’s No. 2 team in the division isn’t a bad look but it’s telling in terms of where these teams are coming into the season. Na’Vi are also working with the absence of Jack “Doki” Robertson since he’s still living out a ban from professional play due to toxic behavior.

Fans can catch both teams when the European division returns Monday, Jan. 13 for matchday three of the Rainbow Six Pro League. The official broadcast can be found here.