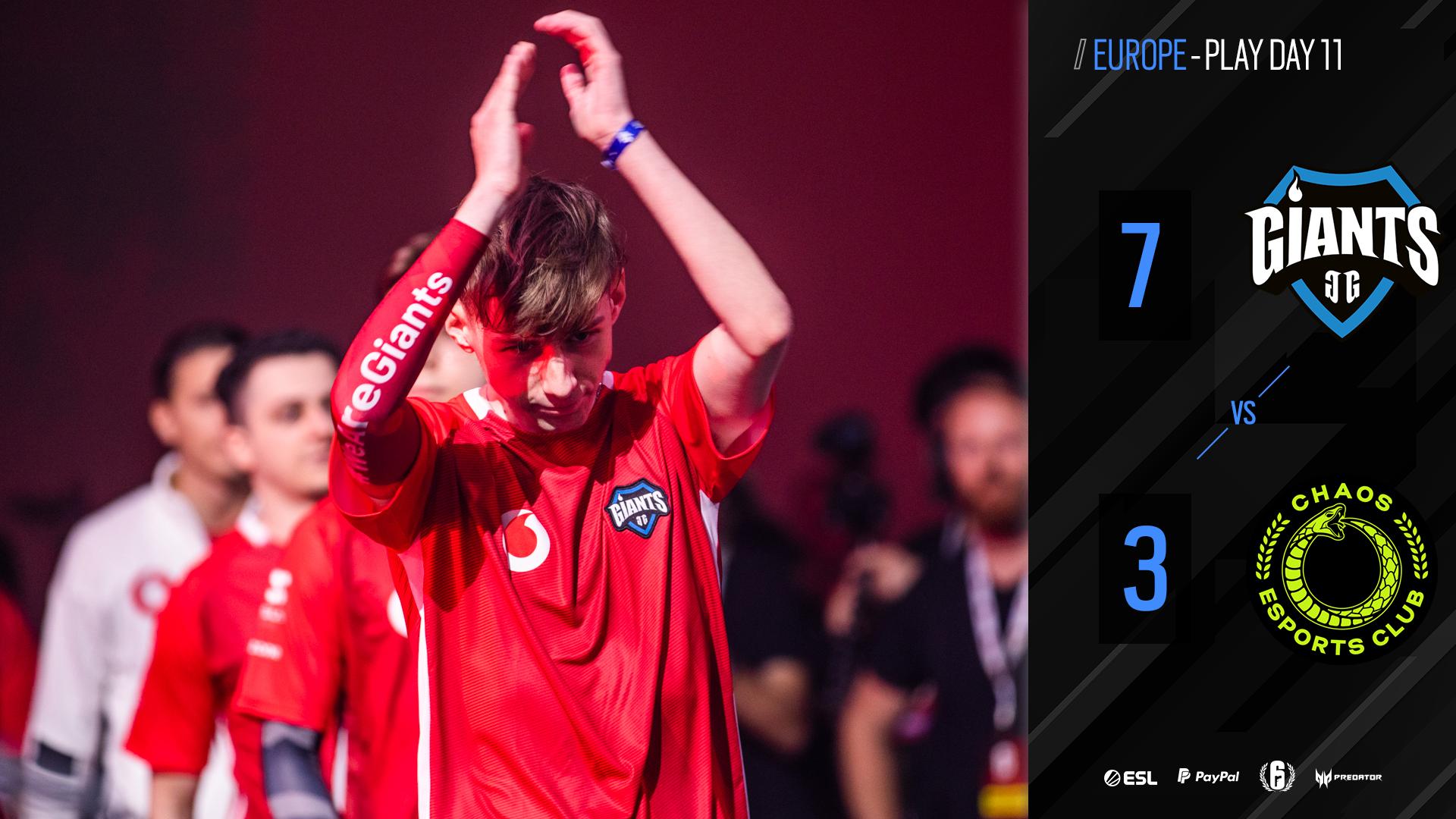 Giants Gaming needed to pull out a win following Team Empire and G2 Esports’ respective victories today. Luckily for Giants fans, Valentin “risze” Liradelfo was there to lead the way to a 7-3 win over CHAOS today.

CHAOS have been underperforming in season 10, but risze was on fire in today’s matchup. Risze posted some impressive plays and was statistically invaluable to Giants’ efforts on matchday 11, according to Siege.gg. While the numbers are impressive for most of the Giants roster, seeing risze wipe the floor with a vulnerable CHAOS roster goes beyond his numbers. Risze’s Zofia lockdown of the Yellow Stairs on Consulate was already impressive, but then he went and outdid himself with a phenomenal one-tap flick to close out the match.

Giants fans should be pleased with the strong show of force today. CHAOS are no slouch, so a 7-3 win means that Giants are still in good shape heading into the final days of the season. With two extremely tough matchups in the near future, it’s probably important that Giants won so decisively over CHAOS. Both G2 and Empire have the same scoreline of 7-3 in their last matchups with CHAOS, so this win puts Giants up there with the other two EU powerhouses.

The European division of the Rainbow Six Pro League has been an unpredictable entity in R6 esports. From G2’s meteoric comeback to Empire briefly falling behind, the division has constantly been anyone’s race. The last few matchdays, however, have given fans a clear picture of who’s still a threat, especially to the top-ranked Giants. G2 and Empire both follow close behind with 22 points. Despite a healthy six-point deficit, both teams could easily overtake Giants in the closing days of season 10.

Giants must now win three tough matchups to keep their standing and Japan slot. Vitality, who lost to Natus Vincere earlier today, are next up on the docket. The following matchups are a bit rough. G2 are slated for matchday 13 and Empire close out the 14th and final matchday of the season.

Fans should also take notice of Na’Vi creeping up in fourth place with 21 points. Again, the gap here appears to be wide but all it’d take are a few missteps by Giants to leave the door open for Na’Vi to play spoiler to some Japan Finals dreams.

The European division of the Rainbow Six Pro League returns on Monday, Oct. 7. Fans can find the official broadcast here.