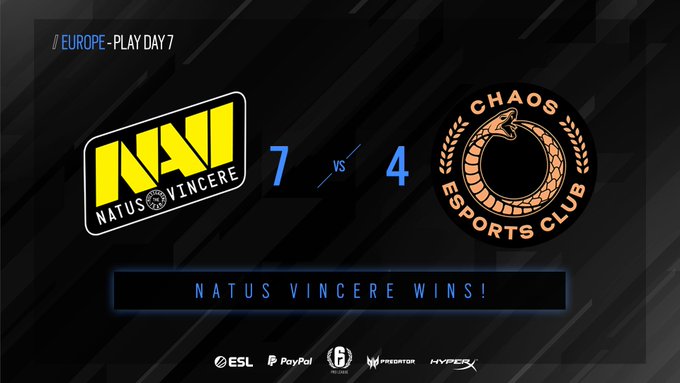 The middle of the Rainbow Six Pro League European standings are a far cry from the top earners in the division, but Natus Vincere looked to make Kafe their signature map. CHAOS didn’t let them win easily, but Na’Vi continued their strong freshman performance in the Pro League today.

Na’Vi’s early-round play was just a step above CHAOS, with rounds being left up to clutches and one-vs-three situations. CHAOS had some impressive frags, especially when looking at Christoffer “Kripps” Brushane. Even with a strong fragging performance from Kripps, CHAOS were at a 4-2 deficit at the half and it didn’t get much better from there.

On defense, Ben “CTZN” McMillan consistently played spoiler to CHAOS, often shutting down winnable scenarios with clever flanks or just straight up frag outs. CTZN put down CHAOS single-handedly by using a CHAOS-created hole in the floor above the Kitchen site. Nobody was left to guard the kill hole and CTZN took advantage of the opening—effectively giving his teammates an easy site retake.

For a short time, CHAOS looked like they may have been recovering from the punishment CTZN inflicted in the first half. With the scoreline at 5-3 in favor of Na’Vi, it looked as though CHAOS weren’t going to go quietly. But Jack “Doki” Robertson showed fans why Na’Vi are the kings of Kafe with a swift 4K, bringing the game to match point and potentially closer to passing Team Vitality in the standings.

Rickard “Secretly” Olofsson showed up big for CHAOS in round 10 with a huge 3K while defending Bar. With attackers all flooding the same stairs, the 3K mirrored Doki’s 4K from one round earlier where players just seemed to line up at the chopping block. CTZN came back alive in the round 11 to give Na’Vi the early man advantage. CHAOS’ Lesion went down early in the round, crippling the team’s defense, and the rest of the players were dropped with ease.

Na’Vi took the map and match at 7-4, proving that Kafe belonged to them and nobody else. Fans expect CHAOS to get a slow start or throw the occasional lead, but matchday seven looked awkward with a tinge of unawareness, especially when a CHAOS attacker ran right past Na’Vi’s Echo, only to have the Echo prevent the defuser pant.

CTZN and Doki both impressed in the fragging department, racking up 15 and 13 kills, respectively. There was a great deal of hype surrounding the Na’Vi roster when they came into the Pro League this season and it now seems completely warranted.

Na’Vi beat G2 earlier in the season on Kafe with the same scoreline as their win over CHAOS. Broadcaster Ghassan “Milosh” Finge even went as far as to call Na’Vi the “gatekeepers” of Kafe. Fans will surely see if the freshmen squad live up to their new title in the second half of season 10.

The Pro League returns in September following a short break and the Six Major Raleigh. Fans can catch the official broadcast here.