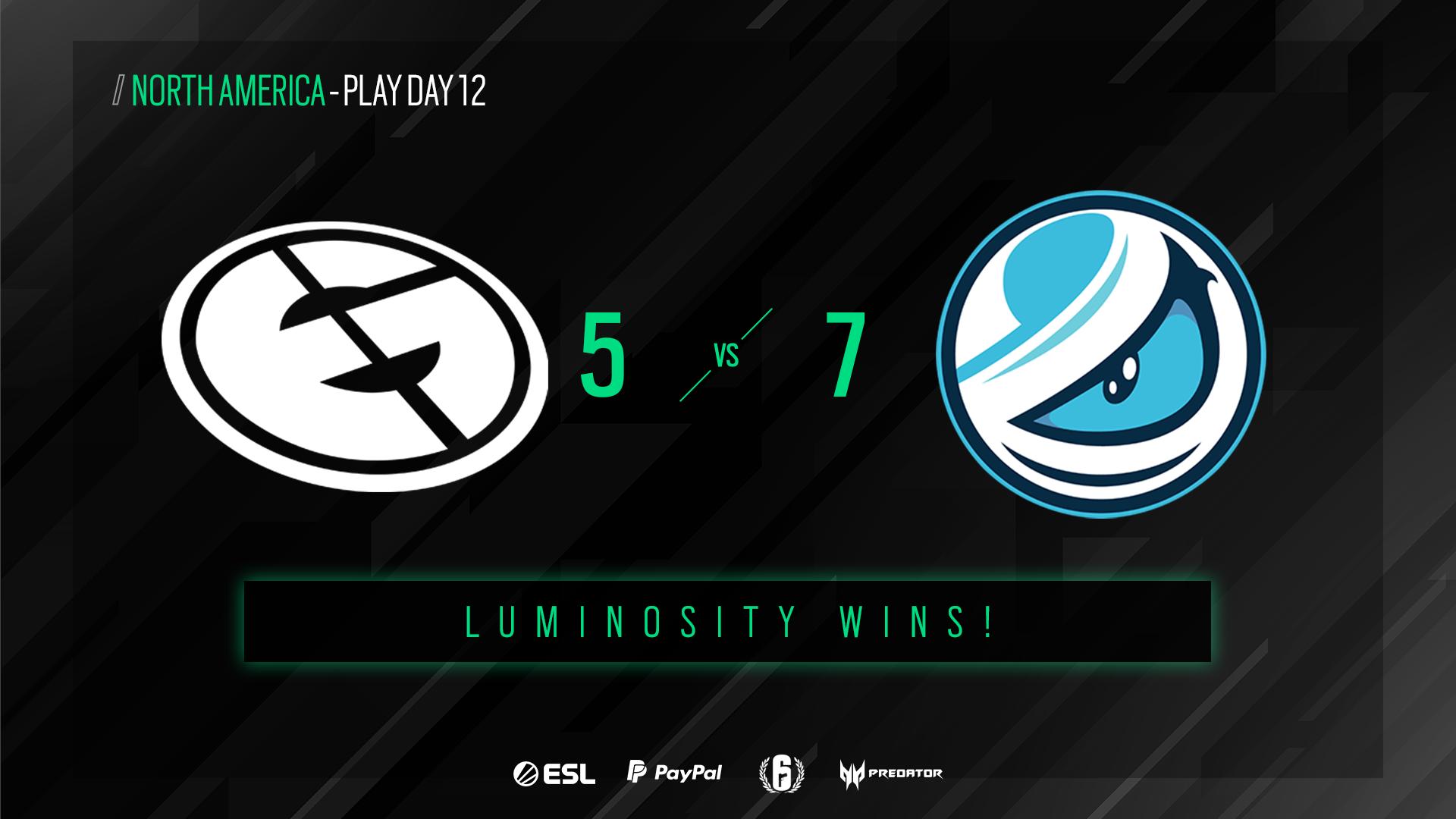 After a day of upsets for the European Rainbow Six division, Luminosity upset the balance in North America by taking down Evil Geniuses 7-5.

In a winning effort led by Kian “Hyena” Moyazani, who posted 16 frags, Luminosity brought Evil Geniuses fans a massive upset. Conversely, EG were held from even one point in the matchup despite Ammar “Necrox” Albanna earning 15 frags for his squad.

After a massive shift in the European division, fans expected the North American division of the Rainbow Six Pro League to play a bit more by the numbers. Unfortunately for EG fans, Luminosity had other plans. Sitting in a distant fourth to EG’s second, Luminosity could now stand a chance at climbing into a second Japan Finals slot for the North American division. This would be contingent upon Team Reciprocity and EG dropping the ball in their last two matchups, as well as winning out in their last two matchups.

The second-ranked Evil Geniuses needed the win in matchday 12 to fend off a strong Team Reciprocity. With nine possible points left in the balance, Luminosity stole away three points from EG. Without those points, EG now must rely on a couple of things—mainly, Team Reciprocity throwing their remaining matchups with a vulnerable TSM, a battle-hardened DakrZero Esports, and a now spoiler-driven Luminosity Gaming.

Luminosity still have to run through Team Reciprocity and Rogue. Rec are a greater threat than Rogue, but Rogue have drawn Rec, Spacestation Gaming, and EG in the past. Draws in a late-season scenario normally only hinder progress and are a dream for teams looking to play spoiler. Luminosity are still in the race, but it’ll be a tough one if they hope to actually head to Japan and not just play spoiler.

Conversely, EG are now left vulnerable to a strong Team Reciprocity, who are just three points behind. Reciprocity’s softer matchup with TSM should allow them to overtake EG by one point in the standings. EG will have to pull it back together in their tough matchups with a draw happy Spacestation Gaming and the almighty DarkZero to guarantee a spot in the Japan Finals.

While today’s loss stings for EG fans, the team could still bring it back, especially if Necrox’s anchor game is as strong as it was in tonight’s matchup. It’s wildly impressive to see such consistency from an anchor player when the team needs it most. If nothing else, Necrox’s anchor play should serve as a bright spot for EG fans.