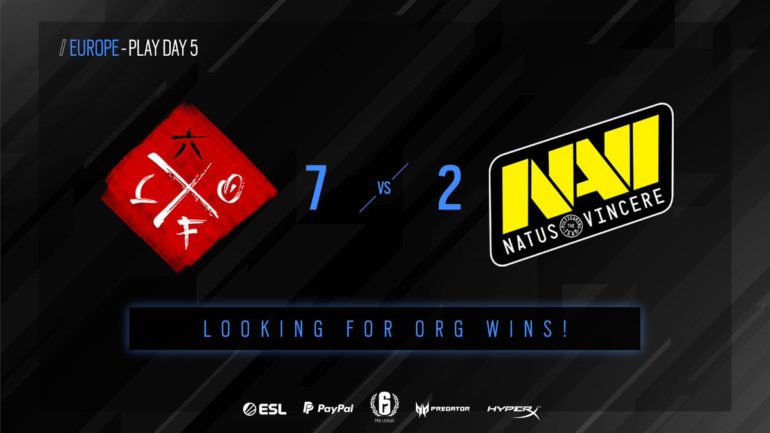 After Looking For Org beat Natus Vincere at DreamHack Valencia earlier this month, the two teams met once again today on Coastline. Even after losing organization support, LFO, formerly LeStream, continue to be a top-tier team while Na’Vi still show some promise in the division.

Na’Vi came out of the gates swinging with a chaotic round one win. LFO struggled to deal with Na’Vi’s aggression and the round ended in near total chaos as the kill feed lit up with both attackers and defenders until it boiled down to a one-vs-two. Na’Vi were granted no momentum, though, since LFO answered back with three round wins of their own.

Lukas “korey” Zwingmann’s Pulse was a constant throne in Na’Vi’s side. Using the heartbeat sensor to locate attacker positions completely derailed Na’Vi’s entry into the building. With two C4 kills from below, LFO put themselves in a strong position early on in the round.

After having a strong start, Na’Vi looked off their game. LFO continued to punish Na’Vi in round six. Leon “neLo” Pesić and Jack “Doki” Robertson were tasked with staving off LFO from grabbing a 5-1 lead, but they were unable to beat the clock. Na’Vi needed to bank on a major throw to be able to draw LFO. In seven rounds, Na’Vi had picked up one win and that was the first round of the match.

LFO ran through their opponents with ease for six straight rounds and it was hard to even reconcile that this Na’Vi were the same squad who took a match off of LFO at DreamHack Valencia. Fans could see moments of a highly-skilled team here and there, but they were few and far between. Aside from round one and round eight, Na’Vi were really struggling throughout the matchup. Broadcaster Devin “mzo” Becker said that neLo led the board with eight frags for Na’Vi, which seemed problematic since he isn’t a designated fragger.

LFO reigned supreme in the matchup, which wasn’t a surprise by any means. It was a bit of a surprise, however, that Na’Vi let the match run away for seven straight rounds. Closing things out at 7-2, LFO retain their undefeated record in season 10. As Ghassan “Milosh” Finge said, though, LFO has two tough matchups ahead of them with G2 and Team Empire right around the corner.

Fans will get to see if LFO can hold on to their undefeated record when the European division of the Rainbow Six Pro League returns on Monday, July 15 for matchday six. The official live broadcast can be found here.