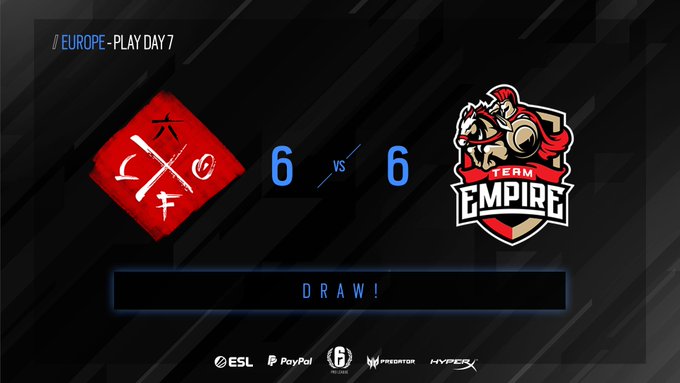 The European division of the Rainbow Six Pro League has been decidedly dominated by two teams this season—season nine champs, Team Empire, and the current front runner, Looking For Org. Neither team was looking for a draw in today’s match, though, since they both needed a win to fend off Team Vitality.

LFO made sure fans got an interesting match with a massive target ban on Jager—a clear afront to Empire’s Danil “JoyStiCK” Gabov. The attempt to weaken Empire’s star player is a smart move. While target bans don’t usually yield much, they’re capable of crippling a team’s strategy when levied against the right player.

Given that LFO and Empire were the top two EU division teams of season nine, it’s no surprise that they went blow-for-blow throughout the entire match. Maurice “AceeZ” Erkelenz continued his killer season 10 performance until the stream cut randomly and fans weren’t happy—outages occurred every few minutes.

Fans saw an even keel 3-3 at the half but the opening defensive round went poorly for LFO. AceeZ didn’t seem to mind shouldering the weight for his team when he clutched up to get some important frags on Empire. Another standout performance from the German player ensured that LFO would continue the back-and-forth scoreline. Setting the match up at 4-4, things looked grim for both teams.

A draw here would be detrimental to both squads in the standings since Vitality won their matchup with GiFu earlier today. It took nine rounds, but finally, things began to take shape for LFO when they strung two rounds together to break the tit-for-tat nature of the match. The victories were short-lived, however, and Empire snapped back to 5-5.

LFO got match point off of Empire with Valentin “risze” Liradelfo leveling the final two Empire attackers on a Cash site flank. Empire looked ready to take their first loss of the season but managed to pull out the draw, which doesn’t really work out for either team.

Vitality have been creeping up on the top spot all season long and only snaking one point doesn’t accomplish too much for LFO or Empire in the standings. Empire now sit up top with 17 points and LFO are hanging in with 16 to their credit.

Both teams will have to continue to work extremely hard in the second half of season 10 if they want to keep the top spot away from Vitality. It’s looking dangerous up at the top, and if today’s back-and-forth gameplay was any indication, then the European division is in for some action-packed games after the Six Major Raleigh.

The Rainbow Six Pro League will now take a brief hiatus and return in September. Fans can catch the official broadcast here, provided whoever is in charge can keep it up for more than three minutes in a row.