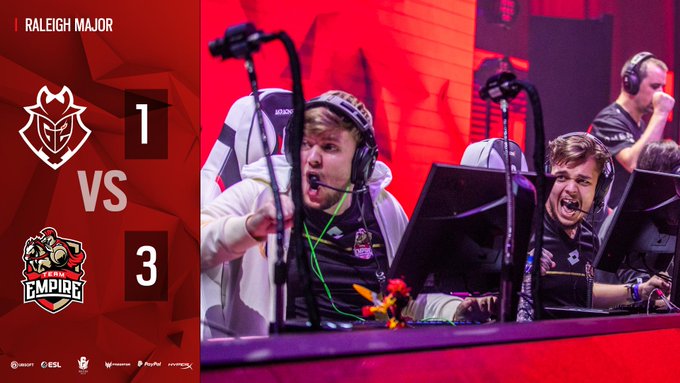 Juggernauts G2 Esports have finally met their match at an international LAN. The Six Major Raleigh title belongs to Team Empire after toppling G2 3-1 in the best-of-five series.

G2 have been historically powerful on LAN, but Empire showed them that even they can bleed. Before today, Empire hadn’t even succeeded in taking a map off of G2, let alone an international LAN title. G2 have dominated in every single LAN event they’ve been a part of including the Six Major Paris 2018 and Six Invitational 2019. The loss comes as a massive upset to broadcasters and fans alike.

Empire may have had a tough time on the first three maps of the best-of-five but the fourth and final map, Coastline, belonged to the Russian Machine.

Border saw Empire gain their first map win over G2, along with an unprecedented one-vs-five ace clutch by Danil “JoyStiCK” Gabov. The display was nothing short of masterful, and while it was a tough match, Empire clearly shook G2. For a brief period, it looked like G2 was going to bounce back to dominate after their overtime win on Kafe but it wasn’t meant to be.

Both ClubHouse and Coastline landed in Empire’s favor with the team edging out G2 by at least two rounds. Coastline looked all but assured for G2 as the team held a 3-0 lead before Empire decided to take the reigns. After an astonishing seven-round winning streak, Empire crushed G2.

To say the final map was one-sided would be a massive understatement. While G2 looked good in early defensive rounds, the team looked completely unaware of where they were on the attack. Empire leveled G2 with such force that the squad became unrecognizable.

The weight of Empire’s achievement will take some time to set in, but there is most certainly a change in guard coming to the EU division of the Rainbow Six Siege Pro League. G2 will have to go back to the drawing board after such a huge misstep at LAN and an underwhelming season nine performance.

With the Raleigh Major closed, fans can look forward to the return of the Pro League sometime in Sept. Until then, fans are encouraged to take some time to check out Operation Ember Rise on the Technical Test Server tomorrow, Aug 19.