Fnatic shut down NORA-Rengo in the R6 Milan Finals quarterfinals

Fnatic will continue to represent APAC in Milan. 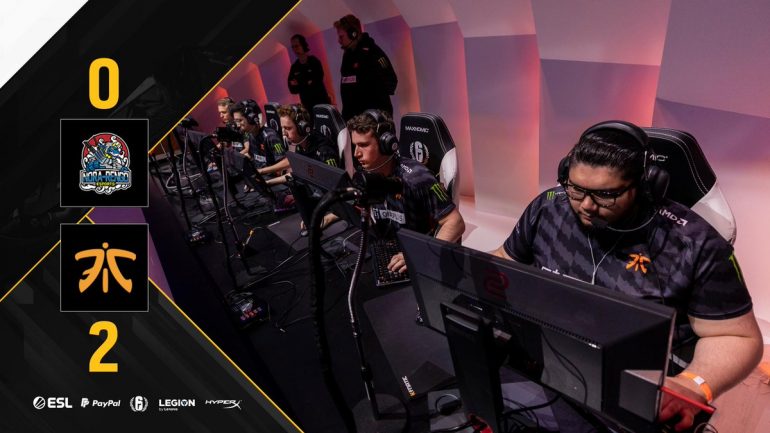 Fnatic and NORA-Rengo faced off once again at the R6 Pro League Milan Finals today.

This quarterfinal matchup marks the seventh time Nora and Fnatic have met and past matchups showed that the victor would come out on top by the skin of their teeth. This time, Fnatic beat Nora 2-0 to move on in the tournament.

Jake “Virtue” Grannan heavily contributed to early Fnatic wins on Border by grabbing a beautiful Jager 4K on defense. Fnatic showed up in strong form as the team commanded a convincing 5-1 lead. Nora consistently started their attacks in great position, but they failed to capitalize on their control and couldn’t answer Fnatic’s recoveries. Aggression and communication worked in Fnatic’s favor on defense, but attacking proved to be a different story.

Nora’s attacks didn’t inspire much confidence and it looked like there were some kinks in the team that still needed to be worked out on the attack. But Nora shined on defense due to their aggression and strategy. The addition of Yoshifumi “Yoshinngo” Yukimori to the Nora roster proved to be a strength for the Japanese team. The Nora newcomer provided some needed stability on defense.

Yuta “ReyCyil” Inoue stealthily held his position to deny the defuse and Nora the round they needed to build momentum. Nora forcefully followed the momentum to a 7-7 scoreline. Even after Nora brought the match back to overtime, Fnatic wrapped it up at 8-7—although the defining factor was Virtue’s consistent frag runs.

Clubhouse was more kind to Nora. They took the opening two rounds off Fnatic on defense. Yoshinngo really came alive on Clubhouse, grabbing some important early frags on unsuspecting Fnatic players. Despite Nora’s strong start off the blocks, Fnatic brought the match back to 3-3 at the half in a much more team-oriented mindset—rather than leaning on Virtue’s fragging ability to clean up.

Matthew “Acez” Mc Henry knocked out a huge double to help deliver Fnatic’s first lead in the match at 5-4. Although Nora took away Fnatic’s 5-4 lead, Ethan “RizRaz” Wombwell and Etienne “Magnet” Rousseau pulled out all the stops in a man-disadvantage scenario to force match point at 6-5. Acez was unable to clutch up the match point and Yoshinngo solidified his worth in pushing into overtime to give Nora another chance.

Ultimately, Fnatic took down Nora at 2-0 in the series, mirroring the APAC Finals matchup. Although the crowd loudly chanted NORA-Rengo throughout the matchup, Fnatic put in just a bit more work to come out on top.

The matchup was nothing short of brilliant for both teams as Fnatic narrowly fended off Nora during overtime. Although many spectators will be sad to see Nora go home so early, APAC fans still have one horse in the running and it looks like a strong one.