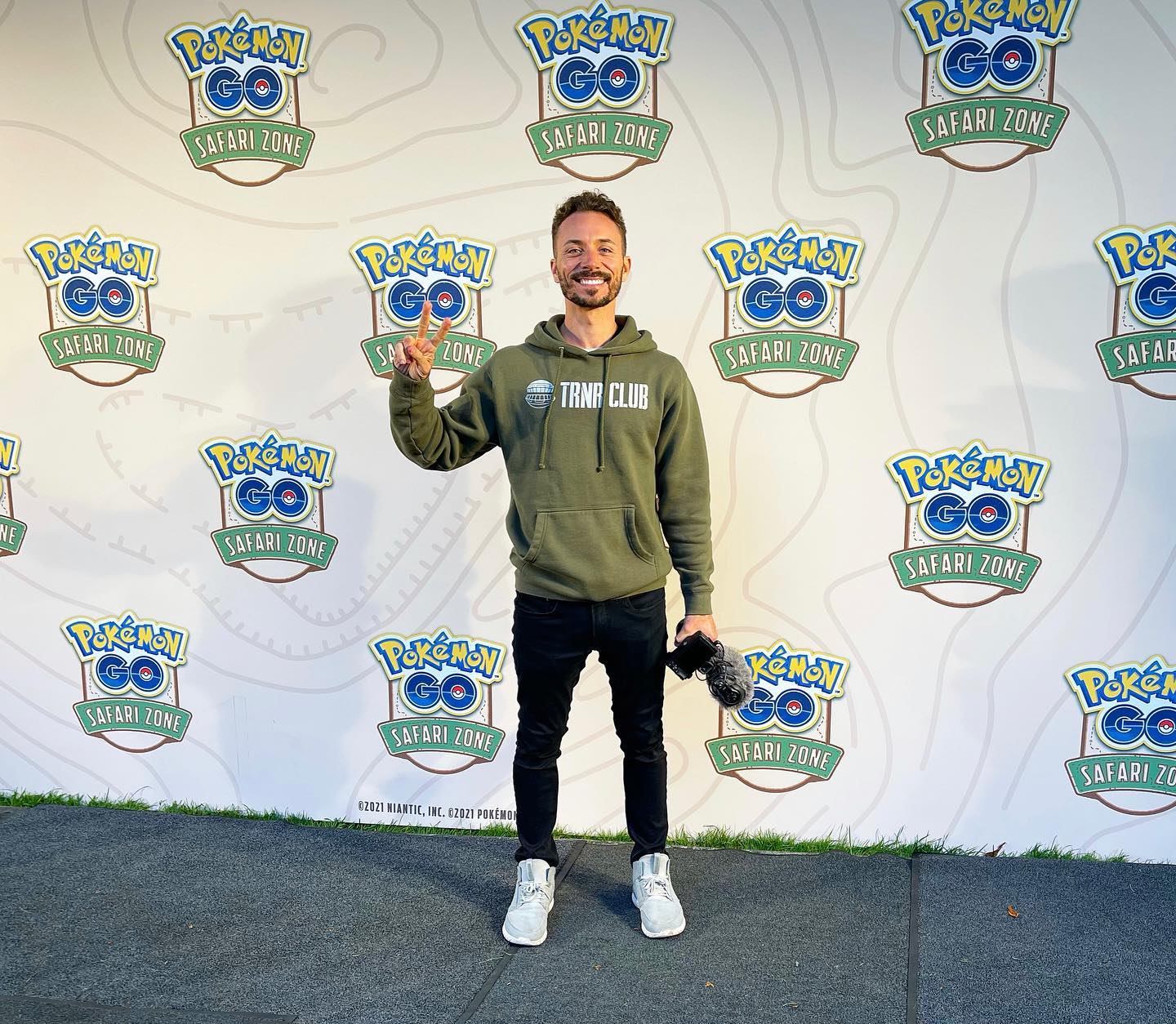 Whether it’s early in the morning or late at night, in the heat of summer or the cold of winter, you’ll have trouble finding The Trainer Club making a video from anywhere other than outside.

The YouTube channel The Trainer Club, which gives players tips and tricks and overviews of Pokémon Go events, is run by Billy Lutz. Lutz has a long history with Pokémon dating all the way back to Pokémon Red and Blue when he was in elementary school. For many adults, Pokémon became a phenomenon during their childhoods—and Lutz is no different. He loved gaming as a kid and the pocket-monster franchise was a big part of his gaming life until about the fifth grade when he started skateboarding and playing soccer.

It wasn’t until Pokémon Go came out that he turned his attention back to the franchise. Pokémon Go launched in 2016 and his friends and then-girlfriend were instantly hooked. At first, Lutz didn’t want to download the game, pointing to his previous obsession with Pokémon games. But as he watched his friends play it, it became harder for him to resist.

“I became completely obsessed,” Lutz told Dot Esports. “It was just a blend of like gaming into augmented reality, with a sprinkle of exploration and scavenger hunts, that, you know, all that feeling just kind of melded together into one.”

Although the word “obsession” can have a negative connotation, Lutz turned his love of the game into a YouTube channel. Throughout the COVID-19 pandemic, his approach to making videos may have changed slightly, but the content remained top quality. Now that Pokémon Go has shifted back to live events, Lutz’s videos have shifted too, with more live events appearing on his channel.

Meshing a healthy lifestyle, career, and gaming into one

Lutz attended Elmhurst College for his undergrad and the University of Western States for his masters in human nutrition. He also has a personal training certificate from the National Personal Training Institute, so it’s no surprise Lutz puts a big emphasis on walking and exercising in conjunction with Pokémon Go.

“I am not actively participating in anything health related but I find it very interesting,” he said. “I participate in it constantly for myself and am passionate about sharing my knowledge with everyone on my journey including in integrating it as part of my Pokémon content as underlying healthy mindset and health practices because I know how valuable it is for their life.”

In fact, Lutz had a few different jobs before he settled into content creation. He had his own clothing company called Bonafide Clothing Company that produced clothing for Smite. The brand started working with Smosh influencers and that’s when he was first alerted to Pokémon Go.

Right around the time Raid Bosses came out, Lutz began paying attention to YouTube creators such as MYSTIC7 and Trainer Tips. At the time, Lutz said most of the Pokémon Go content out there was in the form of blogs.

“I was like ‘that looks like there’s space that if I could translate what I’m doing for people in person, and I could create videos about these concepts and showcase it, then I think that it would be really beneficial for people,'” Lutz said. “It wasn’t really like a popularity thing, it was more like a helping people thing.”

The Trainer Club channel was started in October 2018. In 2020, the pandemic forced Pokémon Go and its players to shift how they interacted with the game and the people they shared it with.

If he’s not at live events, Lutz is always filming his content outside. But in 2020, there was a big push for everyone to remain home to stay safe from the coronavirus. Given that Pokémon Go is focused on exploring the world around players, the nature of the stay-at-home orders was in direct conflict with the game.

The pandemic brought a lot of hardships. But Lutz’s background in health and his ability to understand the human body and its need to be outdoors put him in the unique situation of being able to handle the shift in how the game was played.

“I have always really been outside,” Lutz said. “So obviously, you know, like, there was limitation as far as events go, which changed everything. But the play from home and all the changes that they made really accommodated everybody’s different situation, because we all have different situations.”

Although staying inside was recommended during the height of the pandemic, Lutz respected everyone’s decision to do what they felt was safest. For him, though, playing inside was never an option.

As the pandemic continued, Lutz had to think of new ways to alter his videos and give people tips on how to play and be healthy but also respect what was happening in the world around him. Niantic helped since it started implementing more features that enabled people to play the game without the need to travel far. The game added features like increased spawn rates of Pokémon while using an Incense, half hatch distance for eggs, and a wider area for people to reach PokéStops and Gyms.

Pokémon Go is slowly starting to return to live events. This started with the Pokémon Go Safari Zone in Liverpool in October but also included events in Philadelphia and St. Louis.

Even though vaccines are now widely available, the COVID variants forced event organizers to play it safe when creating these events. Tickets were originally sold for the Safari Zone with the intention of the event taking place in mid-2020. Those events were canceled and played at home. But when 2021 came around, organizers took a second shot at having the events in person.

The first post-COVID in-person event Lutz attended was the Liverpool Safari Zone. Although Pokémon Go players were excited to get back to in-person events, it wasn’t quite the same as pre-pandemic events.

“[Liverpool Safari Zone] was unique,” Lutz said. “Because before, if the events didn’t get canceled, all the events are always massively popular and huge, right? So there’s tons of people there. It’s a crazy experience. You hear all the shrieks, everybody’s excitement and joy, and everybody’s celebrating.”

For anyone who’s attended a Pokémon Go event before the pandemic, they’ll tell you how crowded it can get, how people who don’t know each other form groups organically, and that they’ve made everlasting friendships from these events.

Post-pandemic, it’s not quite the same, and that’s mainly due to the number of people who are let into the events to maintain social distance. Even though the events looked a little different, Lutz and many others who attended the in-person events still had a great time. There’s something special about being in the presence of other people who enjoy the game and playing together.

“It was fun to play those events from home and get all those Shinies but at the same time, there’s that specialness of being in a specific location,” Lutz said. “So having that come back was just magical. It’s something that I just love to be at, to participate in, to meet with people, to connect with people, and to really be around that experience.”

The next steps for Pokémon Go events

The December 2021 Community Day weekend is coming up soon for Pokémon Go and it’s one of the best community events of the year due to how big it usually is. This year, Shiny rates for many Pokémon are increased on certain days and the past two years of Community Day Pokémon will be spawning more often.

Community Days, which happen every month in the game but are particularly popular in December due to the sheer number of Pokémon that spawn in abundance, are always a time for friends to get together and see who can find the most Shinies or perfect Pokémon.

Throngs of kids and adults alike gather in parks, historic towns, or popular landmarks to catch as many Pokémon as they can. Groups can sometimes form organically and people can be seen exchanging friend codes or competing to see who has caught the most Shinies.

Pokémon Go’s next Community Day is Dec. 18 to 19 and trainers around the world can Shiny hunt for their favorite Pokémon from the last two years of Community Days.

For December’s Community Day, Lutz will be holding two meetups, one in Woodruff Park in Atlanta for the first day and the other at The Grove in California on the second day where locals can join him in person to catch Pokémon while the event is live.