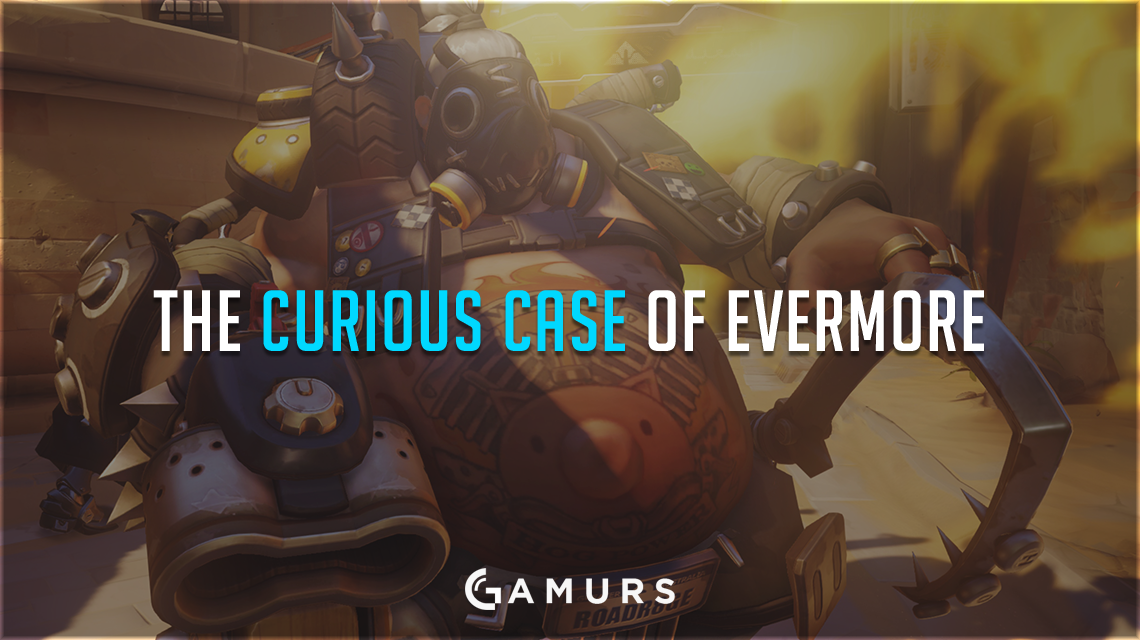 The Worst Best Player in the World

Whenever a new player debuts in any esport, we have to operate on what knowledge we have about them. Sometimes that may be their history in a past title, or it may be based off of their success playing the game at a high level in solo queue. I’m having a hard time remembering any team who entered into the scene of any esport title with as much talent as Kongdoo Panthera. They burst onto the Korean Overwatch scene, sporting the top three highest rated players on the ladder in the world, with an average skill rating across all six players above 4,300. 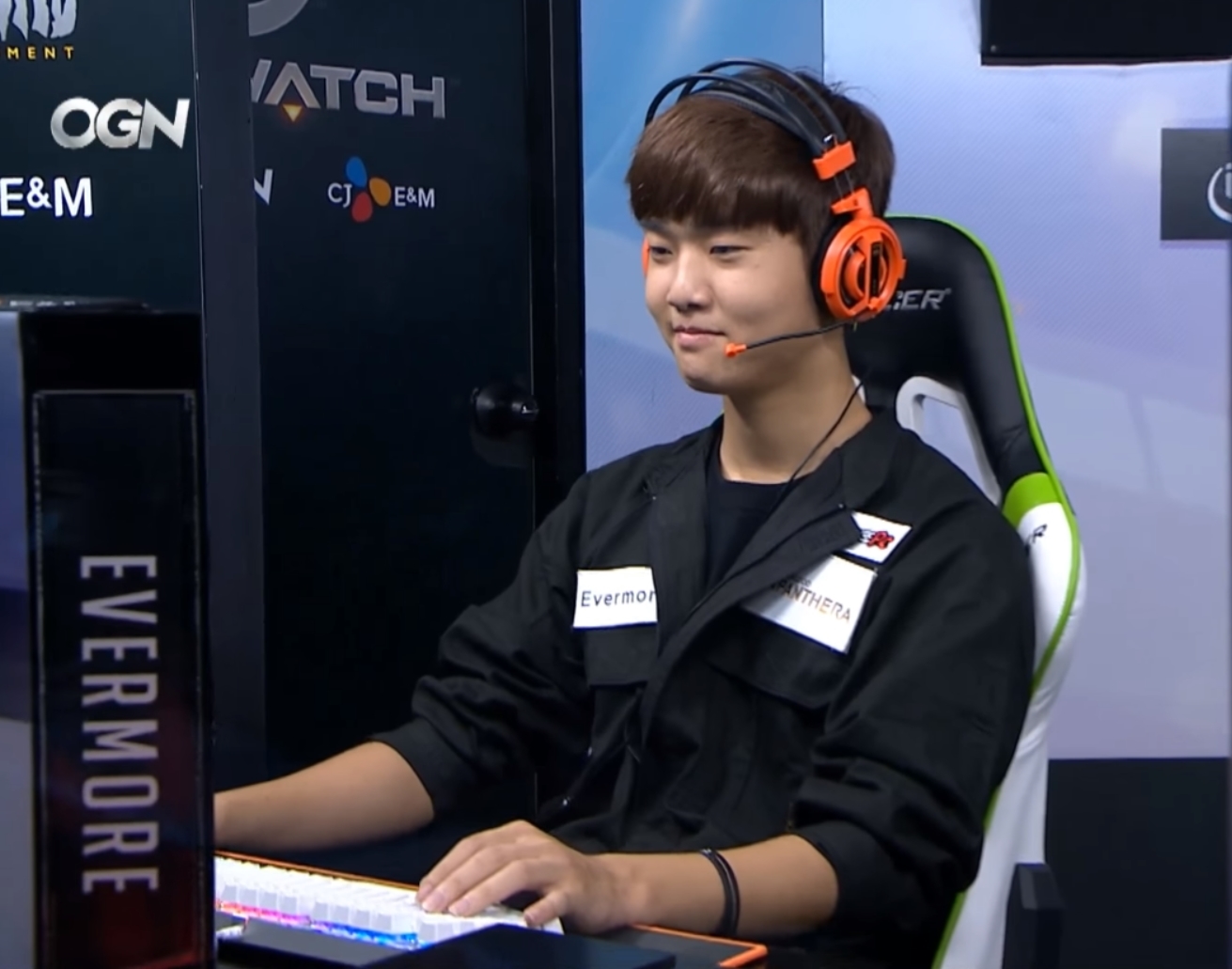 Sitting atop the ladder as the highest rated player in the world is Evermore. At the time of this article, he is sitting at a skill rating of 4,657, nearly 100 points ahead of his nearest competitor. Famous for his devastating Roadhog play, there were whispers about what he could be. Would he become a star, or would he be the latest in a long line of players who excel in casual play, generate excitement, and then fail to meet the hype?

Now we’ve seen him play as a professional player in the Apex league, once against Reunited, and once against LW Blue. From these series, we’ve learned a lot about him as a player, and some clear tendencies have emerged.

As I stated before, when we haven’t seen a player play before, we have to operate based on what we know. All we had to look at was Evermore’s competitive play statistics to draw our early conclusions, and those early conclusions painted a picture of a Roadhog savant.

These statistics are good and mind-boggling at the same time. Nearly 200 games with an 87.8 percent win percentage is disgustingly consistent. He tops the charts in damage, hook accuracy, and eliminations. So far, the hallmarks of great player are coming together.

Where we start to see some oddities are in his objective time and eliminations. On both of these figures, he is among the worst players in the world. We know he’s a successful player, and he is still among the best at finding kills, but he clearly doesn’t play the objective very often. This illustrates an image of a Roadhog who skirts the edges of the fight, looking for picks. As we see in his professional matches, he does this just as successfully as he does in his competitive mode play.

Evermore’s solo queue statistics lean towards an individualistic style of play, and the film we have of him in Apex confirms that suspicion. Especially on areas of the map where his team is defending one specific spot, like hybrid or assault maps, he frequently splits off alone.

On King’s Row against Reunited, Evermore positioned himself in the alleyway. His aggressive forward hold caught Vallutaja’s Reaper off guard, instantly one shotting him and stalling out the entire Reunited push. Against LW Blue on Gibraltar, he held the room next to the bridge in the forward tower alone, far from any support on his team. It took them a full minute and a half to dislodge him, and during that time, he hooked and killed both the enemy McCree and Lucio, halting the first two pushes from LW Blue.

These sort of antics are the kinds of tricks one would use to cheese out wins in solo queue. But they aren’t the only oddball strategies he has available to him. On defense, he holds the flanks solo, but on offense, he pushes the flanks alone. Notably when attacking the second point of Temple of Anubis, Evermore waits for his team to push up the center, only to sneak around the inside area to look for a hook on the enemy supports.

The frequency at which he hits his hooks is only helped by the fact they are coming from unexpected angles. But despite his individual successes, as a teammate, he is failing hard.

Despite the insane level of mechanical skill on Kongdoo Panthera, they have yet to win a match, only taking one out of seven maps played so far, and are down 0-2 in their group. The often cited reasons are their lack of coordination as a unit and their inability to change strategies. Unfortunately for our best player in the world Evermore, both of these failures can be pinned squarely on his shoulders.

His individual mentality and solo antics completely ruin Kongdoo’s ability to operate as a unit. Both of the examples I gave previously of his solo holds were only temporary stalls. On King’s Row, he was cut off by Unfixed’s Mei wall and taken down in a 3v1, while on Gibraltar, Evermore was so far from his team that once LW Blue grouped up, they were able to gang up on him to remove him from the map.

In both instances, Kongdoo then had to face their foes in a 5v6 fight to hold the first point of the map. And in both cases, they lost, giving up the first section of the map almost for free. On Gibraltar, it was even worse as the reset time for the defending team is so long. As such, they weren’t able to take the normal position on top of the shuttle in the hangar phase, and subsequently were unable to hold in that phase either.

Even on attack, his solo pushes cost his team. As I mentioned before, Evermore was attempting to flank on Roadhog at the second point of Temple of Anubis. During Kongdoo’s attacks, he was often the only one to find a kill, but it simply didn’t matter. Again, his absence from the main fight cost his team as Reunited would simply engage the rest of the Kongdoo squad 5v6, easily winning the battle.

While it’s not impossible to win a fight 5v6, it places your team at such a massive disadvantage that the odds of success drop massively. But Evermore isn’t done putting his team at a disadvantage yet. He is also a key reason they have such poor hero adaptations. Looking again to his solo queue play, we see he has almost 200 games of Roadhog, but his next most played is Zarya at only half that, floating around 100 games played. After that, he has only played a single game on four other heroes.

So realistically, he only has two hero picks available to him, with Roadhog being his best by a massive amount. While Evermore does play Zarya occasionally in his pro matches, his solo mentality doesn’t transition well to the more team play focused pick. Unfortunately for Kongdoo, Zarya is a must have hero in the current meta. The necessity for Zarya and Evermore’s dependence on Roadhog means that it often forces WakaWaka onto Zarya, despite his prowess on Reaper.

This creates an increasingly complex situation for Panthera. Normally, Rascal is their Reaper player, but Rascal is also their Mei player. So if Panthera wants to have Mei and Reaper, they need WakaWaka to play Reaper. This leaves them with no Zarya, and by necessity, forces Evermore onto the pick. So in order to have the strongest heroes in the meta, they need to have their star player play a style he struggles with.

On top of all this, it’s still necessary to play a Reinhardt or Winston as your primary tank in order to protect your supports as you aggress against your foes. This means that the vast majority of the time Panthera is playing a triple tank setup with Roadhog, Zarya and Reinhardt. This team composition has almost no tools to deal with enemies on the high ground or a floating Pharah.

As we saw against LW Blue, Saebyeolbe on McCree was an absolute monster against the tanks of Panthera. He held the high ground on both Numbani and Gibraltar and simply had a shooting gallery, pumping out massive amounts of damage as he was under no threat.

So due to Evermore’s insistence on a solo queue play style and his lack of flexibility, he is a huge detriment to his team’s ability to function as a unit. He frequently puts his allies into difficult fights where they are at a man disadvantage, or he is forced to play a style and hero he is visibly less comfortable with.

Will he be Nevermore?

Sadly for Evermore and the rest of Kongdoo Panthera, their run in Apex is all but over. They still have one match remaining, but at best, they end up in a three way tie for second in the group. But because they lost the head- to-head against both teams they would tie with, they are already mathematically eliminated.

So now the question remains, what will become of Evermore? I obviously don’t know if OGN will put on another season of Overwatch, but I highly suspect they will. Most likely, his career is far from over, and luckily for him, he already possess incredible mechanics. Those mechanics are far harder to train than it is to learn new heroes or be coached in new playstyles.

As Overwatch continues to grow, I have no doubt that talents like Evermore will find themselves on top teams with quality coaching staffs who can transform their players into stars. While Evermore and Kongdoo Panthera may have had a disappointing debut season as they failed to live up to their expectations, I hope their story isn’t over. I can’t wait to see where it leads.

Has anyone else fail to meet your expectations in this season of Apex? Comment below or tweet your answer to us @GAMURScom.