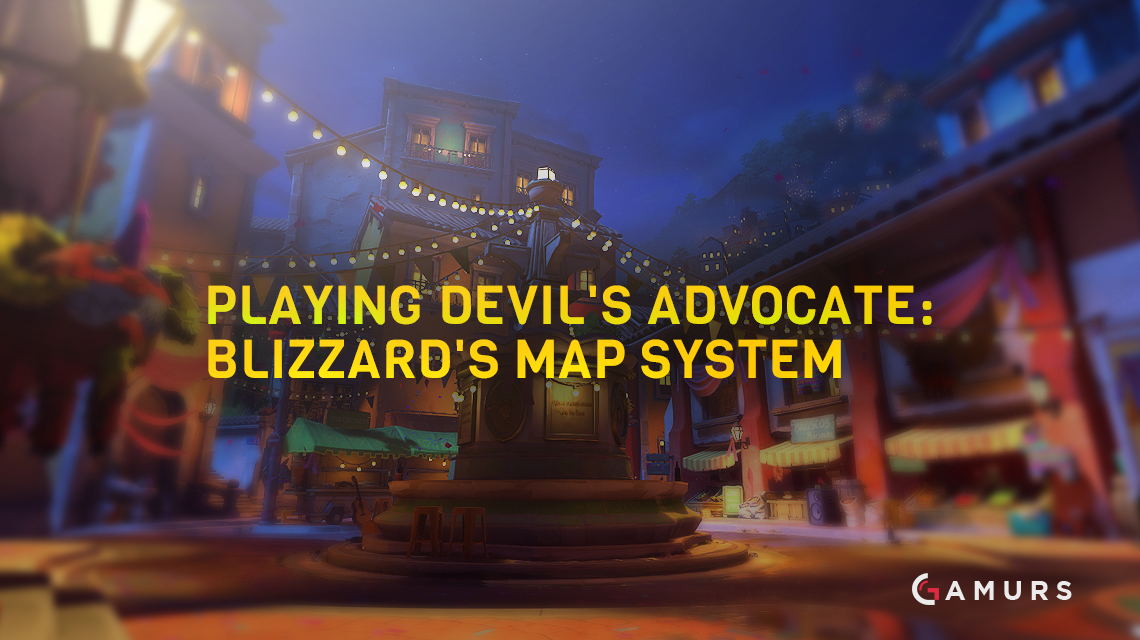 It is no big secret that Blizzard has recently received a lot of criticism for the way they handled Overwatch’s esport side. Setting aside the other primary complaint around having LAN servers for events, the largest complaint is the recently implemented predetermined map system.

As they had their fingers in moving IEM Gyeonggi, the Overwatch Winter Premiere, and MLG Vegas to a predetermined map system, it is clear that Blizzard intends to stick with this style, at least for now. I’ve yet to see anyone discuss the potential merits of such a system, and in this piece, I intend to play the devil’s advocate and do just that.

The complaints have focused around one thing: the notion that predetermined maps will lower the level of play in professional Overwatch. The idea is that forcing teams onto maps they either have not practiced or have practiced less will mean that their strategic depth is lowered, simply because they haven’t had time to refine their play on that map.

The advantage of a pick/ban system is that teams are the masters of their own fates. If they go to a map they are not prepared for, we can hold it against them, either for banning poorly or having too narrow of a practiced map pool. The team’s control over the map choice means that they are more likely to play a map they are practiced on, and one their foes are not known for dominating. So ideally, we get less stomps, and have more even matches.

The Call of Duty Precedent

Now to many esport fans, having predetermined maps sounds strange. In Counter-Strike, there is a pick/ban system so teams can try to end up on a favorable map to them. However, in Call of Duty, there is a long standing precedent of preselected maps.

I certainly don’t know much about Call of Duty, but according to GAMURS’s Call of Duty expert Justin Binkowski, the preselected map system has been in place for a while. In any given best-of-five, the map type order is Hardpoint, Search and Destroy, Uplink, Hardpoint and finally Search and Destroy. The OGN Apex format is very similar to this, where even in a 3-0 victory, the teams will play multiple different game types. However, the primary difference is that in Call of Duty, the specific map is also chosen by the tournament instead of the teams.

At DreamHack Winter, the tournament organizers employed a beautiful map draft format. It both allowed teams to pick their strong maps, but prevented a team from completely banning out their weakest game mode. It was an eloquent solution and one that received a lot of praise from the community. But it has a fatal flaw: it won’t survive the future of Overwatch.

The DreamHack solution worked because of the number of available maps at the time. Having an odd number of maps meant that each team could ban a set number, pick a set number, and have one left over to be the tie breaking map in a series. But with the addition of Oasis soon, this system wouldn’t work.

As Blizzard adds maps, this system will become less viable. An even number of maps would leave an extra map left over after the picks and bans. Even if there is an odd number of maps, we would eventually be forced to give each team additional map bans, meaning they could ban out an entire game mode.

Sadly, any mutation of a map pick/ban system will run into the same issues. However, a predetermined map system would remove this problem. When properly done, it could ensure that each different game type is properly represented and is not reliant on the number of currently available maps. Considering how dedicated Blizzard appears to putting out new maps, this is a legitimate benefit to a predetermined map system.

A contentious effect of a predetermined map system is that it forces teams to practice a much wider map pool than they otherwise might. Many maintain the view that forcing teams to play on such a wide array of maps will weaken their play on each map due to practice time constraints. However, I would offer the counter point that it creates opportunities for better storylines.

In order for a team to win a championship, they would need to prove their prowess on several different maps, instead of just a few core maps. It would leave us without a doubt that they were the most versatile team at the given event, and worthy of the title, and it also opens up chances for upset victories. The top tier teams won’t always be on their best maps, so sometimes, a middle team can sneak a map or two away, which can make for a closer series. It’s a hard argument to make to many, but I do believe it isn’t a bad thing.

But easily the biggest benefit of a predetermined map system is its effect on the analyst desk. Because the map pool is communicated well ahead of time, each analyst on the desk can form a prediction prior to being on air, and bring stronger arguments to the desk to support their prediction. When compared to having to form definitive opinions live when the maps are selected, the desk can now give concrete statements about who will win with specific set scores.

As we saw at MLG Vegas, this was the case. Ignoring the instances of desk members saying teams would win because they were friends with the players, it was great to see the analysts state exact match score predictions. The predetermined maps provides the analyst desk with an extra discussion piece and can improve the quality of the broadcast.

What Sucked (This Time)

The single largest concern expressed was how little time the teams at IEM Gyeonggi and MLG Vegas had to prepare for the new map pool. This is undeniably an issue and almost certainly affected each team’s ability to prepare, given the time constraints. Heading into the future, this must be fixed. I’m not certain on an exact timeline, but I would like to see the maps announced at least a month ahead of time.

This ensures that each team can have plenty of time to prepare for whatever maps they might play on. While it means that teams may not be playing on their strongest maps, it also means that at least the teams will be fully aware of which maps they need to practice. In some cases, it will actually increase the practice time teams put onto certain maps that they otherwise would simply hope to ban.

The short notice for the December events can hopefully be avoided in the future, and with the proper notice time, I could see the benefits of a predetermined map system.

Putting a Bow on the Issue

This past weekend, both IEM Gyeonggi and MLG Vegas took place. Many pros and experts within the scene, myself included, lamented the predetermined maps. Collectively, we complained that it would limit the strategic depth and lower the level of play at each tournament.

However, when I ask myself, “Was the Overwatch played this past weekend great?” I have to answer with a resounding yes. The play was exciting as ever and the competition remained fierce. It rarely crossed my mind that the maps were preselected, and instead, I was able to just enjoy the games that were played.

I don’t believe that the level of play was lowered by the preselected maps this weekend, and I thoroughly enjoyed the benefits of the analyst desk being able to give concrete predictions. While I seriously doubt many players or fans are convinced yet, I do believe there are legitimate upsides to a preselected map format.

Ultimately, time will tell and we shall see how Blizzard moves forward with Overwatch esports, but I don’t think we need to lament the map format.

What is your favored map system? Comment below or tweet your answer to us @GAMURScom or @GAMUS_OW