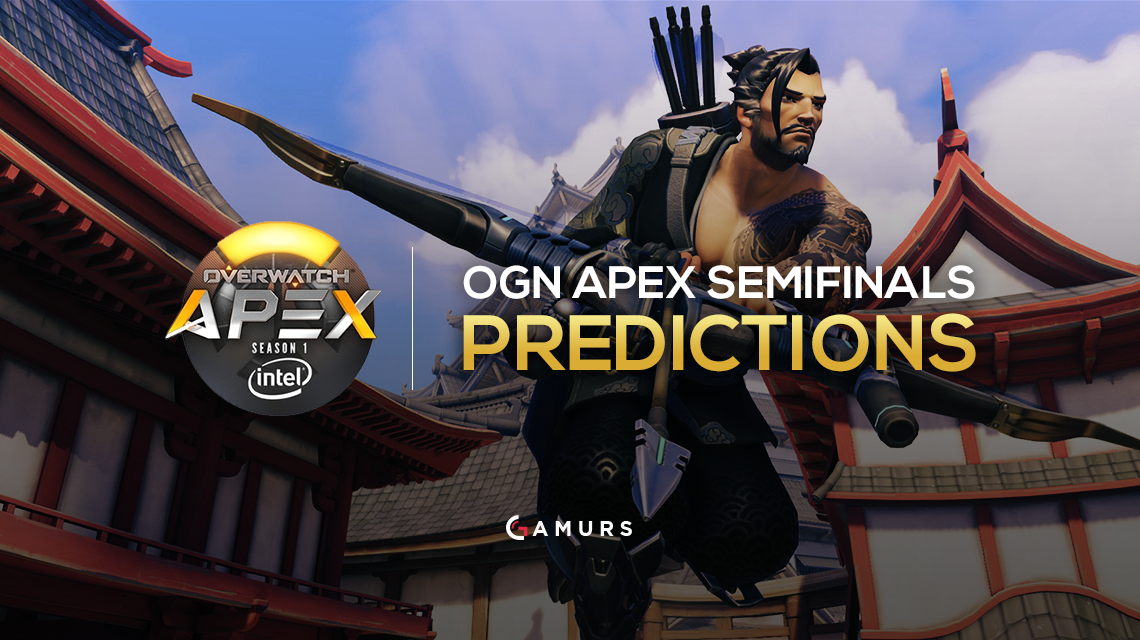 With OGN’s Overwatch Apex currently being the preeminent league in the world, it’s only natural for the competition to draw lots of attention. Featuring many of the best teams in the world, it has provided us with many thrilling series and hours of highlight reel plays.

We’ve cleared the first stage of the bracket, leaving us with just four remaining teams. The matches were incredible. Some matches were predictable, while others had mind boggling results. We now head into the semifinals and each matchup features teams we’ve never seen face in Apex. Both as an exercise for myself and to shine some light on the upcoming games, I’m now going to provide you with my predictions, reasoning, and win conditions for upsets in each matchup.

This was an agonizing match to predict as both teams have so many excellent qualities to them. Yes, BK Stars took their quarterfinal 3-0, whereas Afreeca went 3-2, but BK Stars was facing a team that didn’t deserve a playoff spot in my mind. Afreeca, on the other hand, went up against Reunited, who was on a hot streak. This is only one example of conflicting factors that make this series so difficult to predict.

Both rosters have merit to them as well. Afreeca has the incredible DPS duo of Arhan and Recry, but Bunny’s Tracer play is undeniable. Where Afrecca has shown that Jin can’t flex off of Zarya effectively, we see that Bernar successfully plays Winston alongside Alarm’s Dva as they form an incredible tank duo.

And this is really the crux of the issue. Afreeca has the better DPS duo, while BK Stars has the stronger tank players. In the way I see this game, a strong tank duo can constrict the enemy DPS players by following them around or putting pressure on their supports. Also, in this meta, with Dva and Winston both being such strong dive options, Bernar and Alarm will be more effective than Recry and Arhan.

BK Stars is likely to take the king of the hill map, purely off of Bunny’s Tracer play. Against LW Blue, he was fighting alone against two or three of his foes and emerging victorious. His tracking ability and knack for staying alive makes him such a huge threat. This is a notable strength for BK Stars as Afreeca showed some signs of struggling against Vallutaja’s Tracer.

On the payload maps, we often saw Afreeca making some suspect decisions to file in one at a time and willingly split-spawn themselves. On the otherside, BK Stars did not suffer from such suspect decisions and didn’t give up huge momentum leads for free. But the other big reason BK Stars is my pick to take this match because they proved that they adapted to the patch quicker.

While Afreeca played almost no Dva and Soldier, we saw BK Stars pick both heroes up frequently. On the latest patch, these heroes have proven to be incredibly powerful options in the quarterfinals, and so far, only BK Stars have picked up both heroes. Dohyeon on Solider will be an apt match for Recry’s Pharah and Dva is allowing Alarm to be a carry like he never has been before.

For Afreeca, their Zarya player Jin seems to be stuck on that pick, which is another strategic weakness of the team. Bernar is still a far superior Zarya to Jin when he chooses to be. This is another powerful pick for BK Stars on king of the hill and overall provides them more flexibility.

As you may have noticed, I said this series would be a 3-1, not a 3-0, and where I think Afreeca will steal one back is on the assault point map because the map style opens up their biggest strength; that strength being their DPS players.

Recry’s Mei is excellent and is a particularly potent pick on assault point maps, both on offense and defense. The ability to create space with walls and blizzards makes her a powerful zoning tool on either side, particularly when the map is constricted to such small areas.

Meanwhile, Arhan’s Geji is another key tool for Afreeca on this map style. His ability to suddenly explode and chain several kills together is critical for cleanly taking a point and avoiding a stall. On defense, his Genji is still an effective part of the Afreeca strategy, especially on the first point of control points where there are ample flanks to attack from.

Sadly, I think it stops there. Afreeca Blue makes a strong case to take the assault map, but besides that, the superior tank play of BK Stars will overwhelm the DPS of Afreeca and means that the chance of an upset is almost nil. Perhaps if Jin has learned to play Dva over the last week, then Afreeca has a better chance, but from what we know now, it seems unlikely.

Both of these teams shocked us in the quarterfinals. nV upset Rogue, who was thought of as the best team in the world, with a substitute and role swaps no less. Meanwhile, Uncia had a strangely close 3-0 against Lunatic Hai, handing them a very rare series loss. Due to these series, both of the former tournament favorites were knocked out, so now we look for a new favorite. I’m going to select Uncia as my new tournament favorite and say they will win against nV 3-1.

One of the biggest style advantages Uncia has is their versatility. nV, in their last series, showed almost no strategic depth. Mickie played nearly only Dva and as a team they still don’t have a Pharah or Genji player. On the other side, Uncia’s Dnce is a master of versatility, playing whatever is needed for his team, which opens up Birdring to be a playmaker on Reaper, Genji, or Roadhog. This lack of flexibility is easily punished, especially if Dnce goes onto Pharah, which we saw Rogue play against nV with great success.

Versatility aside, the Uncia lineup is more practiced on their roles than nV, especially for Internethulk, who has found himself in the role of the primary Lucio player. On Uncia, the more practiced Lucio of Bubbly is stronger than Internethulk. In all fairness, Hulk has had some great Sound Barriers, but Bubbly possesses a different mindset and positions safer than Hulk. The former flex player is used to being an off tank, and now he can sometimes get caught out playing the squisher Lucio. The additional up-time on the Lucio auras is an advantage going the way of Uncia.

Just like the previous matchup, I expect Uncia to win because they have adapted to the patch better. They’ve played almost no Soldier 76, which means that their enemy Reinhardt gets to live even longer. And this is a problem against Uncia’s main tank Panker. Panker is one of the best Reinhardt players in the world at playing aggressively, and nV, lacking the versatile tank shredder of Soldier, reduces the risk Panker incurs when he dives his foes.

But my biggest reason is because of the two teams’ quarterfinal opponents. nV barely pulled off a victory over Rogue, one that doesn’t leave me convinced they are the better team. Since the match, a couple of Rogue players have discussed the match and stated they were playing a style they felt uncomfortable on into a meta they didn’t have time to adapt to.

Whereas Uncia’s opponent, Lunatic-Hai, looked much more prepared for the patch. Leetaejun picked up Roadhog for picks, Miro translated his Winston play onto Dva, and Esca showed his skills transferred to Soldier. With this in mind, we need to remember how excellent both teams’ play was in their series. Both of their decisions were correct, and team play was phenomenal. But Uncia came out on top convincingly in a 3-0 and had a much stronger showing than nV.

Yet again, you see I’ve chosen to say this series will be a 3-1, as yet again, I see one map type nV can win: the hybrid map. Their record on hybrid maps is insane as they excel at defending the initial points, but they also attack them well, turning the lead from the first point into a solid streets phase push.

But that’s where their chances end. nV is notoriously bad at assault maps and their king of the hill hasn’t been excellent in the recent metas. If they are going to magically take this series, it would be in a 3-2 and it would require them to take the payload map, which seems unlikely due to how overwhelming Uncia’s advantages are, considering the current state of each roster and the new patch.

What are your predictions for the Apex semifinals? Comment below or tweet your answer to us @GAMURScom.