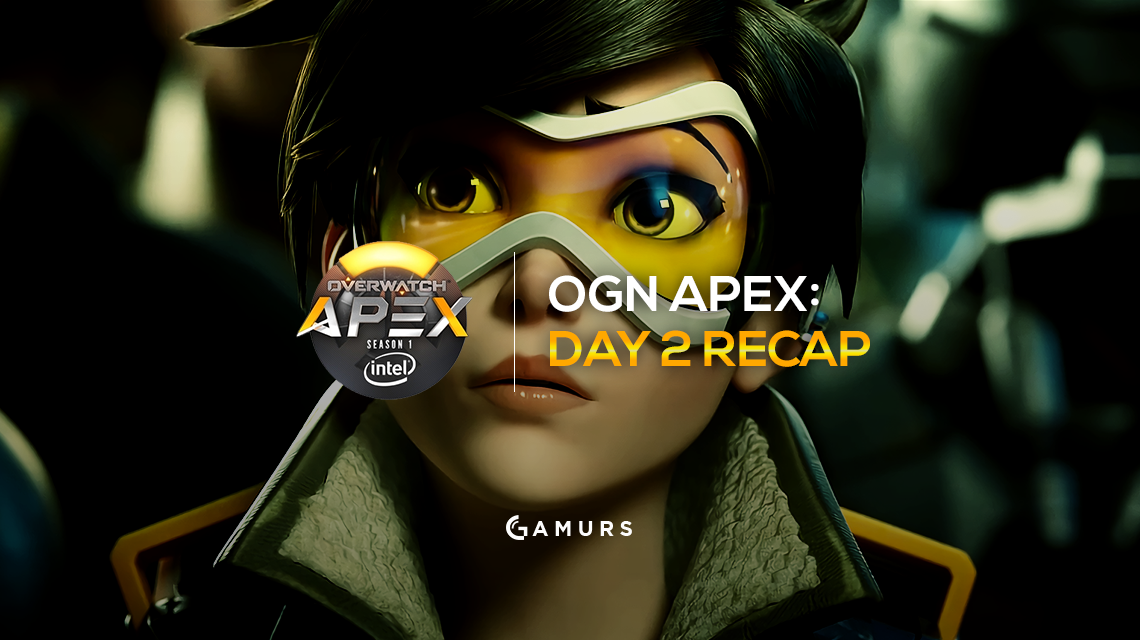 The final week of the group stages for the OGN Apex League continued tonight. Today had two best-of-five series that both had huge playoffs implications. In the first series between Flash Lux and Afreeca Blue the winner secured a seed in the bracket stage, whereas the loser is eliminated from the tournament. In the second series of the night we saw the return of Haksal and Runaway, who if they won secured their playoff berth, whereas if LW Blue took the win there would likely be a three way 2-1 tie in Group D.

If you missed any of today’s action, then we’ve got you covered with our recap.

Like I mentioned earlier, this series was “do or die” for both teams involved. The winner moves on behind Rogue in Group A, and the loser has to wait until next season to play again. To kick off the series, the King of the Hill (KOTH) map was Lijiang Tower. On Night Market, both teams immediately rushed to the point and had a scrappy brawl. In the fight, the close range favored the Reaper and Mei of Flash Flux as they took the initial capture.

Afreeca didn’t simply roll over, but they also didn’t seem to know how to fight back. Recry played three different heroes over the course of the point, trying to find one he could impact the match on. And he found it on Pharah as he easily cleaned up the final fight, taking the point for Afreeca.

When the map went to the second point of Control Center, it was once again Flash Lux who captured the initial point. But once again, Afreeca Blue off the back of Jin’s Graviton Surge, immediately returned and captured the point back and from there on never looked back. Afreeca aggressively zoned forward to put the pressure on Flash Lux, not allowing them to ever approach the point again, easily taking Lijiang and going up 1-0 in the series.

For Flash Lux’s hybrid map choice, they selected King’s Row and it wasn’t initially obvious why. They quickly ran to attack the point, but were repeatedly battered back. Flash Lux’s inability to focus targets became evident in the scrappy fights when they would be unable to find kills. Recry was free to devastate his foes from the skies on Pharah, and was only killed once as he went unpunished by E1kino’s lackluster McCree. Flash Lux were full held on Point A, and opened up an easy way for Afreeca to win.

And easy, it was. Recry and Dayfly played an excellent PharMercy combo and nearly singlehandedly mopped up all of Flash Lux. The lack of a great McCree became extra evident as Recry had uncontested control of the sky and led to an easy Afreeca win, putting us on series point with a 2-0 lead.

This was it for Flash Lux. They were down 0-2 and from here on out, one map loss meant they would be eliminated from the inaugural season of Apex. Backed up against the wall, they chose to take their stand on Volskaya Industries.

They initially struggled to attack Point A as their Ana player, Kisu, got caught out and put them at a Nano Boost deficit that allowed Arhan to clean them up. After being stalled out for a few minutes they were eventually able to execute a Beyblade combo to take the point. When they moved onto Point B, it was much of the same. Flash Lux seemingly refused to build an ultimate lead as they repeatedly attacked only to be defeated and split spawned, which only delayed them further and in the end prevented them from capturing both points.

All Afreeca had to do was capture both points to win the map, take the series, and eliminate Flash Lux. Their first engagement resulted in both teams fighting in a single confined room where the AoE damage from Recry’s Pharah and Adam’s Winston were overwhelming, leading to a first point capture in just over a minute.

When it came to the second point, it was Weeso on D’Va of all picks that stalled out the point with a Self Destruct that killed two players. Arhan was repeatedly putting down highlight reel teamfights, as he would find multiple resets and dash around like a madman. But, Hamtol’s Mei was consistently stalling with Blizzards preventing Afreeca from finishing the map. Flash Lux held for five full minutes, withstanding several all out assaults from Afreeca, but it was all for naught.

Afreeca took a very confident 3-0 victory, and showed their strengths as they confirmed their playoffs seed. However, for Flash Lux their season is now over. It isn’t all bad for them, they had an incredibly difficult group with Rogue and Afreeca, but they still had a good showing and they will return in season two of Apex.

The second series of the night also had huge playoffs implications, but they were less definitive than before. If Runaway took the win then they would guarantee that they and Reunited make it into playoffs. However, if LW Blue took the win then the pressure would now be on Runaway to take their series tomorrow against Kongdoo Panthera in order to make playoffs, in which case Reunited would be eliminated. But, for this series the pressure rested squarely on the shoulders of LW Blue to keep their hopes alive.

For the second time tonight, the series kicked off on Lijiang Tower. On the first point of Night Market it was all about Saebyolbe on Tracer. He picked off two isolated players at the start of the fight, which gave LW Blue an easy capture. He continued to put pressure on the backline of Runaway. That being said, Runaway never put the Nano Boost on Haksal’s Genji thus never quite enabling him to carry. LW Blue easily took the first point and moved on to Garden.

The second point was much closer as both teams gained at least 99% capture. Both Haksal and Saebyolbe were having fantastic Genji games. Despite LW Blue having a better composition to deal with Haksal’s Genji, with a Discord Orb and two beam weapons that he could not deflect, they failed to also shut down Quad who was free in the backlines on McCree to deal damage. Runaway just barely edged out LW to take Lijiang to the final point.

The deciding point was to be Control Center, and Runaway came out to an initial massive lead. Unfortunately for LW Blue, NoName wasted his initial Nano Boost as he got no kills, which gave such a massive edge over to Runaway. LW Blue was unable to capture the point until overtime, leaving Runaway with 99% and only needing one fight to win. Then Runaway were too quick in their retake attempt, which led to them caught up in a Graviton Surge only to be cleaned up. This gave the ultimate advantage back to LW Blue, which they held until 99% capture. In the final fight, it was Haksal who pulled out his Dragonblade to clean up the entire backline of LW Blue, meaning that Runaway took the map and the series lead 1-0.

LW Blue’s hybrid map selection was King’s Row and they began on defense. The first fight went well as NoName’s Mei froze Runaway in place for Saebyeolbe’s Roadhog to tear them apart. However, when Runaway returned LW Blue now had no tools to deal with Haksal and he slashed them to pieces. LW Blue pushed their lead through most of the streets phase but an over extension from Haksal meant that LW was able to easily win a teamfight right before the second point. And from that point they had the ultimate lead and were able to hold Runaway in the streets phase.

LW Blue just needed to take the point and push through streets in order to tie the series and initially it looked good. They snuck around the point and took high ground advantage. But, a key charge from Kaiser and a headshot from Quad took out LW Blue’s Reaper and Ana to secure the fight for Runaway. Almost immediately, LW Blue reversed their fortunes as their Ana Luna won the duel against Runaway’s Ana Shine. With the Nano Boost advantage, they were able to cleanly take the first point. LW was stalled out for a fight in the streets, but Saebyolbe found himself in the enemy backline on Reaper and simply hit headshots to come up with a triple kill to secure the map for his team.

With the series tied up 1-1 Runaway decided to take the series to Temple of Anubis and they started on offense, which immediatly went poorly. In the first fight, Haksal took both his Dragonblade and Nano Boost into the enemy backline, only to be shut down and accomplish nothing. In the second fight they were caught up in the Blizzard from NoName and eliminated.

It wasn’t until LW Blue split up that allowed Haksal to cut them in two and take the first point. Runaway immediately rushed to the second point, only to be held by NoName’s Mei who stalled out the point for his team to respawn. Haksal’s stubborn refusal to play anything besides Genji meant that Runaway was constantly trying the same strategy over and over, to no avail. As such, they failed to take both points.

Now, LW Blue just needed to finish the map in order to put themselves on series point. As if Saebyeolbe could taste the blood in the water, he quickly picked off Haksal and turned it into an extended quadra-kill the secure the first point for LW Blue. At the second point, Runaway held against attack after attack as LW Blue repeatedly failed to use their ultimates together or punish the wasted ultimates from Runaway. It was only in overtime that NoName on Reaper managed to pick up several kills in order to tip the fight in LW Blue’s favor, taking the series lead 2-1.

Once again it was Runaway’s map choice and for the payload map it was to be Route 66. LW Blue began on defense and they charged their ultimates shockingly quick in order to use Nano Boost and Blizzard to take the first fight. But, those ults were sorely missed as Runaway easily fought back, finishing the first section of the map. In the second section of the map, Runaway continued their failure to support Haksal. He was forced to try and carry teamfights without Nano Boosts or Zarya bubbles, and he couldn’t carry hard enough. Runaway was stopped in the second section of the map, and would have to have a hell of a hold to take the series to a final map.

LW Blue’s odds were looking good. They didn’t have to push far, and Runaway was running a triple tank composition into the Reaper from NoName, and they found the initial picks. A quick three kills in the first skirmish let LW Blue begin the second section of the map with over four minutes to only push 50 meters. But, Runaway was desperate to hold, and threw five ultimates in an attempt to stabilize the map. It worked temporarily as LW returned with five ultimates of their own to easily sweep aside Runaway and take the series in a convincing 3-1.

With LW Blue taking this series, Group D is now up in the air. Tomorrow’s matchup between Runaway and Kongdoo Panthera will determine which of Runaway or Reunited progress into the playoffs. The last time we saw Kongdoo Panthera play they suffered from poor teamwork, which may be a weakness a strong player like Haksal can exploit. Either way, we’ll be back tomorrow with our final recap of the Apex group stages.

Who do you think will take tomorrow’s sieries? Comment below on tweet your answer to us @GAMURScom.