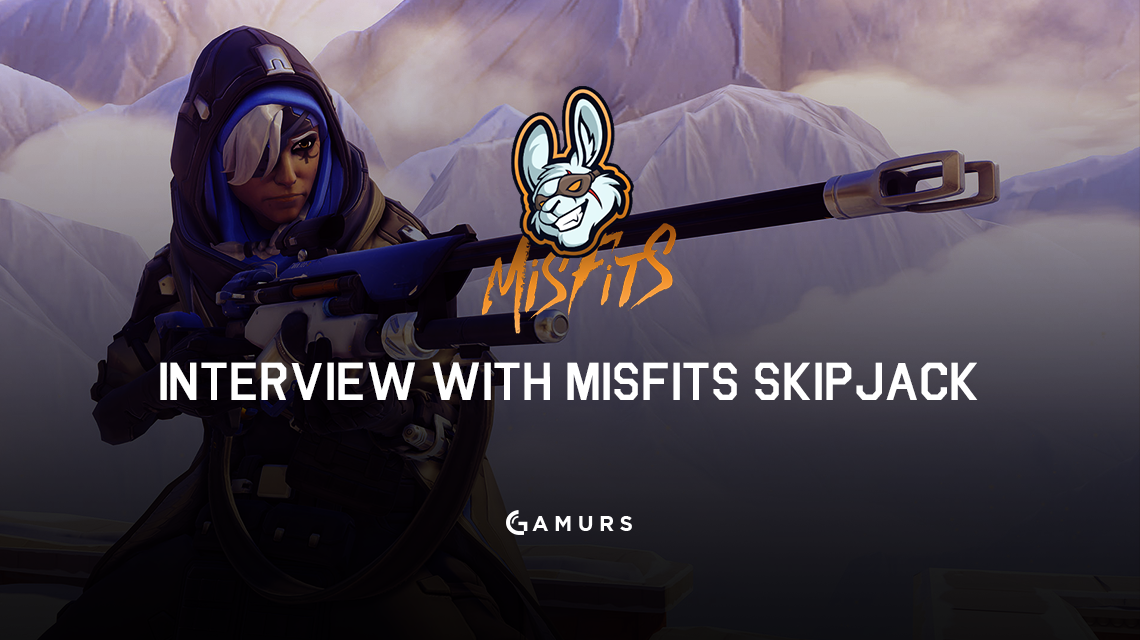 Nicholas “skipjack” Rosada is one of thecoolest and friendliest personalities in the Overwatch professionalscene. We sat down with him and got to know him better, talk abouthow he made his way to Misfits and about hisfuture plans among others. Let’s roll!

So, we had a small introduction, but could you tell mea bit more about yourself?

skipjack: I’m from Germany, I am 27 and Iplay Overwatch as a profession now. I’m still a student, on theside, or I was, up until now, maybe taking a break now. I’mstudying to get a Master’s Degree for Business Information Systemsand also I like going to the gym when I have time, but mainly I’mplaying video games all day.

Does your BattleTag have any special meaning orsignificance? How did you pick it up?

skipjack: Oh that was actually a long timeago, I think I picked it up in a book, I just liked the sound ofit. It has a couple of meanings, like if you Google it, you’ll finda lot of stuff, but for me, it’s just the sound I like, so I stuckwith it.

How did you pick up Overwatch? Did you play any othergame competitively before? What do you like most aboutOverwatch?

skipjack: The first game I playedcompetitively was Natural Selection, which is a Half-Life 1 mod andI think I started in 2003, when Steam was released. I just playedon public but x. I like to measure my skills with others, and I waslooking for a team and I got onto a team and kept playing this gamefor a couple of years, I don’t know, about three to five years. Wegot quite good there, like the best team in Europe, but eventuallyI stopped.

I played World of Warcraft, and I was always looking for thebest guild in the server, I joined there. I played PvP always verycompetitively and when Natural Selection unfortunately died, I waslooking for a new game but there wasn’t really anything out therewhich I really liked, because I liked more the class-based shooterswith a lot of movement. There was Team Fortress, I tried that, butit wasn’t really my thing, it was kinda boring.

When Overwatch was announced, I was completely hyped cause Iknow Blizzard games are always awesome and it was a class-basedshooter and there were fast classes, so I loved it. I knew I wasgoing to love it and I got into it and what I Iike the most is thatyou have different classes, like right now you have 22 classes andthey’re all so different. There’s always something you can learn,you’re never going to master the game because there are so manyclasses and they all have high-skill ceiling and that’s what Ireally like, it’s never going to get boring.

So you are now playing for one of world’s mostprominent and skillful teams, Misfits. How did that opportunitycome around?

skipjack: I got into the beta quite early,in December or November, and before that, I was already looking fora team on Reddit basically and people who have the same mindset asI do: play good, become really good, maybe even pro, and as soon aswe got into the beta, we all started playing together and our teamwas called Eccentric. We performed quite well, we won GosuGamerstournaments and it was really good for us; we practiced a lotand we accomplished something.

Unfortunately, our team died, some players switched teams and wecouldn’t find new ones at that point. After that, I was playingwith many different teams with not a really stable lineup andeventually when the game was close to launch, many other playersleft their teams or the teams split up. At that moment, Kryw andSoOn were also teamless and I played against them before so theyknew who I was, the role I was playing and they asked me if Iwanted to make a team and I said “yes, of course” and that was thebirth date of Graviton Surge.

Then we started trialing many different players over a couple ofweeks and then I think it was when the TaKeOver LAN happened and wewere still five players and we got kr4tos together, who playedLucio for us, and we placed third there even though the team wasbasically just created two weeks earlier, which was quite nice.After that, we continued trialing other players and now we have ourstable lineup. We continued to perform well in other tournamentsand then organisations started contacting us and we got intoMisfits. It was the organisation we liked the most; they were veryinterested in us and we made a good choice.

Who is your favourite hero? And do you enjoy the currentmeta?

skipjack: I like to play Hanzo a lot. Ofcourse, in scrims, I play only Reinhardt and Winston, but whenI play public, I need to switch it up, otherwise it would getboring. I really like Hanzo, Roadhog, Zarya, Tracer, McCree, like alot of classes actually. I also like the healers, but I think Ienjoy Roadhog and Hanzo the most. The meta right now is actuallyvery enjoyable, it was really bad a few months ago. The Widow metawas also not very enjoyable for me, but right now it’s quite good.I’m curious when the patch hits how it’s going evolve but I hopeit’s not going to be too bad.

You are in charge of making some changes in Overwatch.What would you change?

skipjack: Balance-wise, the PTR is doing a goodjob right now. I think the changes they’re doing in the PTR arereally great, like the supports being on an equal level now. Theonly think I’m concerned about is the Hanzo change they made, whichis a little bit too much I think for me. It’s going be a sniper allover again and it’s never enjoyable to play against a sniper, itnever fits great. I hope that they see into this, but otherwise I’mfine with the game. The balancing is great, and I wouldn’t changeanything right now.

A few days ago, you competed at ESL’s OverwatchAtlantic Showdown. How was the overall experience and did youexpect to place higher at the event?

skipjack: Gamescom was really great. Theconvention was really big, the booths were great, the stage weplayed on was also very nice and we got taken care of very well bythe ESL staff; it was very enjoyable and I would totally do itagain.  We definitely hoped to place higher but I tried not togo into a tournament with expectations because when you haveexpectations you can only be disappointed. It would have been niceto win more, but it was one tournament and there will be more tocome, so it’s okay.

What are your goals for Overwatch this year and maybethe first months of the upcoming year, both as a team and as aplayer?

skipjack: After the Atlantic Showdown andthe outcome, we are practising more, of course, and we are focusedon the Overwatch Open, which is going to happen in a month inAtlanta, so we will practice a lot and we want to do better in thenext tournament, which is understandable of course. As for myself,I hope to get onto Team Germany for the Nations’ Cup so I cancompete with my fellow Germans and I hope to bring home thevictory. For the upcoming year, Blizzard hasn’t announced any plansyet and what they’re going do with their esports in Overwatch, butno matter what they’re going do, my team and I want to be part ofit, so I hope they have great plans and we can join themthere.

Do you have any advice or thoughts you’d like toshare with your fans or other aspiring competitive players thatwant to be like you?

skipjack: I often get asked by playersthat want to get into the scene how they should go for it, and Ialways recommend them to go to the LFT sub-Reddit or check the OWDiscord for teams that are searching for players. It is quitedifficult and it takes some time. I always say, “If you play goodon ranked and you make a lot of friends there, if you see someonethat’s really good, you can add him on friends play with themmore and if you play against other teams they will recogniseyour name and as soon as they might need a player or another teammight need a player and ask you to play, if they remember you, theywill come back to you.” So it takes some time and you have to startsomewhere, even if you feel the team you’re playing for is not goodenough, start there and work your way up. Eventually, you will getthere if you’re good enough.

Ok I think we can wrap it up. Any finalshoutouts?

skipjack: Shoutout to all the fans thatsupport us all the time and it’s really great so thank you verymuch and of course, Misfits, the organisation that believes in usand supports us so greatly. It’s been a joy working with them andplaying for them and I hope we have a great future together.

Do you think skipjack is one ofthe best tanks in Overwatch? Let us know by commenting below ortweeting us @GAMURScom.