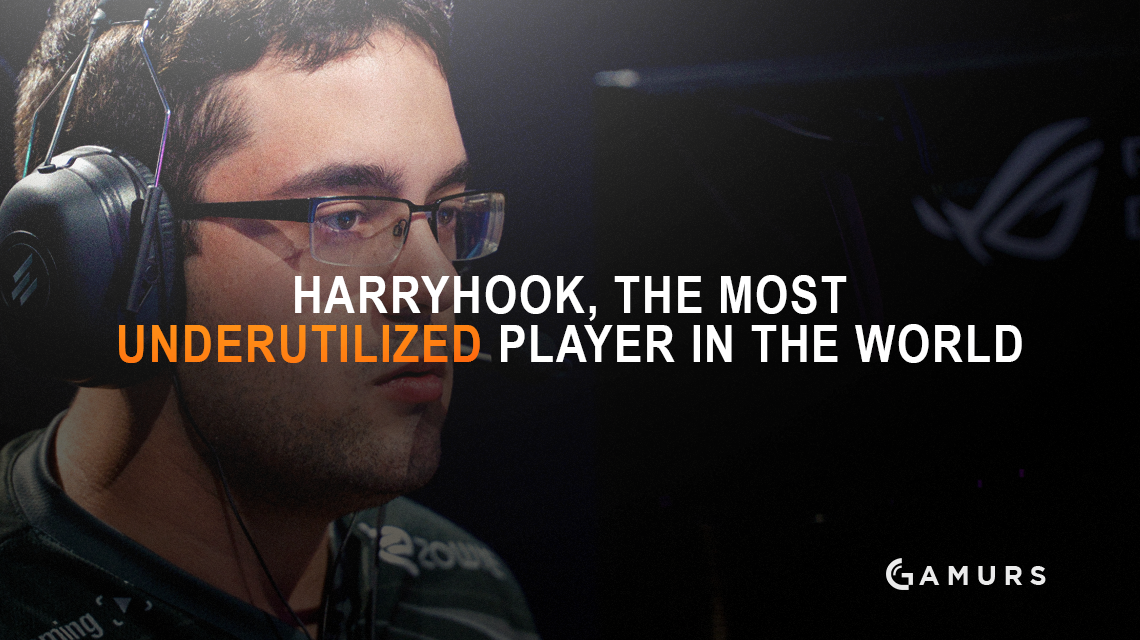 A Hitscan Hero Trapped in a Lucio’s Body

Team EnVyUs (nV) is held as one of the top teams in the world and they are particularly well known for their unpredictability. Many of their players frequent several different heroes, to varying degrees of success, and their primary Lucio player, HarryHook, is no different.

Despite being on a top roster and playing the critical role of Lucio, HarryHook is currently the most underutilized player in the world. His skillset far exceeds the requirements for a Lucio player, and unfortunately, he is currently wasting some of his talent.

It’s hard to deny that nV is a top team. At the last two LAN events, they only lost a series against the eventual tournament winners, and have currently only dropped a series against Lunatic-Hai in the Apex league. They have a strong roster studded with famous names in the Overwatch scene who come together to bring a unique style to the game.

On nV, HarryHook is responsible for being their primary Lucio player and the shotcaller because he is the one who controls the speed boost timing. This puts HarryHook in a position where it is difficult to be a damage threat. We see many Ana players be offensive threats, such as Zappis or Ryujehong, but very rarely is Lucio a proper threat to his foes.

The speed at which Lucio’s projectiles fly is the primary reason for this. His Sonic Blasts fly incredibly slowly and are brightly colored, making them easy to spot. That is why they are difficult to hit on enemies, even at just medium distance because of how easy they are to spot and then dodge. What this means is that the ability to aim is not rewarded very heavily on Lucio, and Lucio players that do have great aim are wasting some of their talent.

Because of this, HarryHook is like the majority of Lucio players where he has to focus on carrying the game through non-damage dealing aspects of his play. Sound Barrier timing, speed boosting to push advantages, and positioning to stay safe and keep his healing aura up. But unlike the rest of his Lucio compatriots, HarryHook has the skillset to be a world class hitscan player.

Flexing on These Fools

During HarryHook’s time on nV, we occasionally get to see flashes of his hitscan skill. Frequently when nV takes to hybrid maps, HarryHook can be seen playing Soldier 76, a hero rarely seen these days. He takes to the high ground overlooking the point and rains damage on his foes.

This strategy works for several reasons, first of which is how well Solider operates as a solo unit. His ability to deal high consistent damage at all ranges combined with his self healing means Solider 76 is an ideal hero to hold off angles alone.

What often happens is HarryHook does so much damage that he forces the enemy team to deal with him. However, when he is aggressed on, he either wins the duel, or simply uses Soldier’s sprint to run away and allow his team to assist him. If teams decide to ignore HarryHook on the high ground, he gets to deal so much additional damage that he not only charges his ultimate quickly, but their players get caught off guard and die before their healers can save them.

None of this would be possible if HarryHook’s aim wasn’t excellent, and normally on Lucio, his aim isn’t tested. But when you watch his ability to track moving enemies, his skill becomes evident. Even his ability to precisely aim is excellent, as we see when HarryHook flexes onto Roadhog. His hook accuracy isn’t quite on the level of players like Hymzi or Evermore, but he holds his own and regularly finds picks for his team.

During HarryHook’s time on nV, we’ve been lucky enough to see brief flashes of his hidden skills, but at the Overwatch World Cup, for the first time, we got to see HarryHook play a more offensively minded role full time. We finally got to see his Ana.

In a post match press conference for Team Sweden, Chipshajen joked that he and HarryHook had a running bet. If HarryHook on Ana beat Chips’s Ana, it would then fall to Chipshajen to be the primary Lucio player for nV. It was a joke of course, but regardless, the matchup was surprisingly close.

Ana is a hero HarryHook has certainly played before, as we can see from his solo queue. But it’s a hero he has never played professionally, as on nV, that role is left to Chipshajen. Now at the World Cup, he was the best candidate on Team Spain to play the sniper support and he showed us some more of what we’ve been missing.

As a support player, HarryHook is used to keeping tabs on his allies health, but where his Ana shone is his offensive play. There was no shortage of exceptional Ana play at the World Cup and HarryHook was a top contender among them. In their group stage match against Sweden, he was contesting sightlines against TviQ’s McCree and demanding respect as he often won the duel. In the quarterfinals against Finland, HarryHook kept charging his ultimate at nearly an identical rate to Zappis, who is famous for being one of the best aiming Ana players in the game due to his McCree background.

But where HarryHook really showed off his offensive play was when he switched onto his most played hero in solo queue.

In the group stages of the World Cup, when Spain faced Brazil, HarryHook left the support role altogether and played McCree. This is incredibly unusual when you consider the skillset it takes to play Lucio. Lucio requires significantly more awareness of the tempo of the game, and doesn’t reward such precise aiming skills due to the speed at which his projectiles fly. Whereas McCree does need that precise aim comboed with proper usage of space to stay safe while outputting as much damage as possible.

HarryHook demonstrated a unique combination of skillsets we rarely see with both great game sense and raw aim. In order to close out the offensive push for Spain on Dorado, HarryHook found a flank that Brazil had left exposed and quickly took the opening. Within just a few seconds, he found two headshots on unsuspecting players to put Spain into a 6v4 situation that let them easily finish the map.

During Spain’s defense of Temple of Anubis, when the observers were watching HarryHook, the audio was filled with the constant bang from McCree’s revolver, which was frequently followed by the loud ping of a headshot. And despite the extreme ranges the battles took place at, HarryHook and his McCree won the duels he took against Soulive’s Widowmaker.

As if it wasn’t visually obvious, as Uber told us on the analyst desk after the match, HarryHook had a 66 percent accuracy rating on McCree, which statistically put him right up there with the likes of Taimou and IddQd. This is insanely impressive from a player who has made his name as a professional player on Lucio, a hero that has such low aim requirements and potential.

Cashier Job, Must have PHD

HarryHook and his skillset make him overqualified to just be a Lucio player. He has all of the necessary game sense required to be a world class support, but he has so much more available to him. As he proved at the World Cup, he excels on the more mechanically intensive and offensively minded heroes like Ana or McCree. The skillset he demonstrates is so far above the minimum requirements to play Lucio and because of how slowly the projectiles he fires travel, the aim HarryHook possess isn’t rewarded.

Because of these factors, I call HarryHook the most underutilized player in the world. I think he has the potential to be a world class Ana or DPS player and that currently being relegated to playing Lucio is a waste of his talents.

Did another player impress you from the Overwatch World Cup? Comment below or tweet your answer to us @GAMURScom.