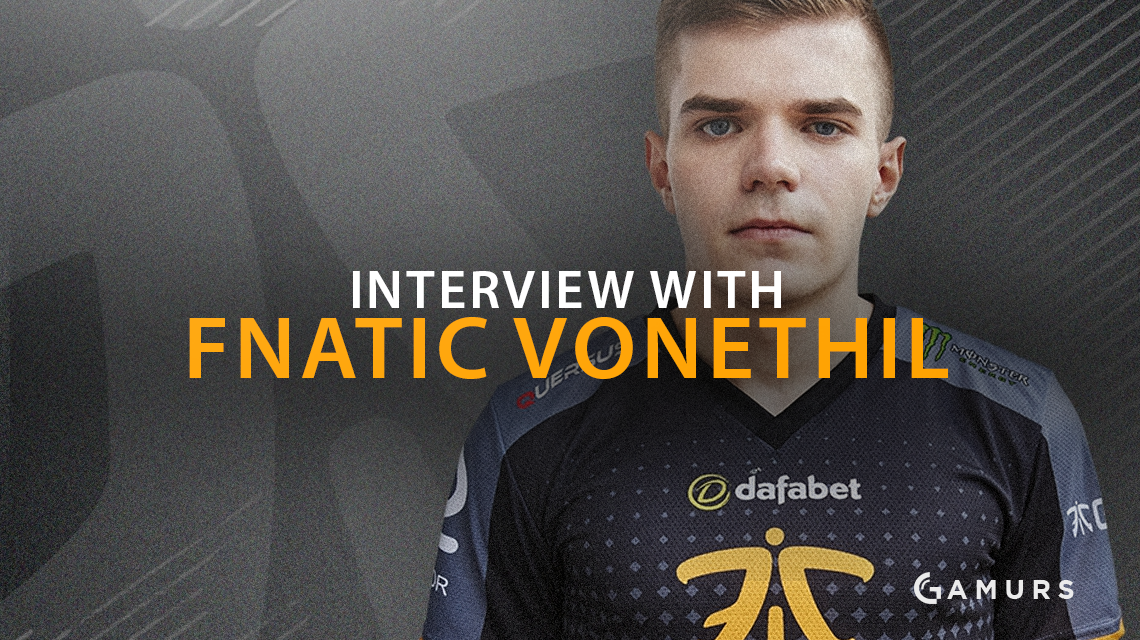 We had the honor to hold an interview with Oliver”Vonethil” Lager, a professional Overwatch playerfrom Sweden who is currently playing for one of world’s biggestesports organizations, Fnatic.

-We had a small introduction about you, but could youtell me a bit more about yourself?

Vonethil: “Sure, I currently playOverwatch it’s like my full time job, so I’m doing thatas much as I can and then on the same time I am helping a personwho’s running a podcast with Overwatch in Sweden. Outsideplaying, I don’t get that much time to do things but when Ifind time I try to spend it as much as possible with friends andfamily.”

-Does your BattleTag have any special meaning orsignificance? How did you come up with it?

Vonethil: “Oh, I think I came up with myname when I was thirteen or something, so I’ve been having myin-game name for as long as I can remember honestly, so likespecifical meaning, I don’t think so.”

-We know you played Heroes of the Storm at a very highlevel before, so how did you pick up Overwatch and what do you likemost about it?

Vonethil: “So, it was like a friend fromHotS that I played a lot with, and he told me that he would quitHotS and wait for Overwatch, so I kept playing HotS for a while,but Overwatch interested me so much more and it looked so funbecause it was like a combination of an FPS and a MOBA. I alwaysliked FPS games, but I had never played them competitively before,so when I got invited, which I got very early, I think like thesecond day of beta, I decided to try it and after that I was stuck,I knew that this game was for me.”

-How did the opportunity to join Fnatic come? How do youfeel playing for such a huge organization?

Vonethil: “I think I was trialing for TeamLiquid at the time but then IDDQD asked me if I was interested instarting up a new line-up with him. I really wanted to play withhim, so I said yes and I quit my trial in Team Liquid and thenjoined him. Then we picked up the nubris guys and then we hadconversations with Fnatic, I think for two months, before wedecided we wanted to go with each other. About how it feels,it’s a lot to live up to but I like that because it makes mepressure myself to perform even better.”

-Who is your favourite hero? Do you enjoy the currentmeta?

Vonethil: “The new patch hit and thesupports now are all over the place, right now I’m playingAna, Symmetra, Mercy, Lucio, so it’s not like before when youwere force to play Lucio all the time. So, I really enjoy the newmeta but I think it’s a bit early to say because nothing isreally set in stone yet. I think the game will be very interestingwith this new patch.”

-You are in charge of making some changes in Overwatch.What would you change?

Vonethil: “Ana probably right now. I amplaying a lot of Ana, actually she’s probably my favouritehero right now, but her ulti is way too strong, it’s so easyto get her ulti up and you can get so much value with that ulti,like you can get Ana’s ulti up before any other ulti andit’s really hard to counter it.”

-You had a great run at the ESL Overwatch AtlanticShowdown about 2 weeks ago. How was the overall experience in a bigevent like this and how did that affect you?

Vonethil: “It was really nice to meet allof the other players from the other teams, from both of regions.And it’s always fun to play on stage, like I always get torush going up on the stage and playing because you are alwaystrying to pressure yourself to perform even better thanyou’ve ever done before. It always makes me want to pushharder and on how it affected me after, it was probably that Irealized that I really wanna do this. I really wanna win, but wegot out in semi-finals. However, I’d really wanna be in thegrand final and win it, so it makes me more serious about the nextLAN which is now ELEAGUE. I really wanna try to take that LAN.”

-What are your goals for Overwatch this year and maybethe first months of the upcoming year, both as a team and as aplayer?

Vonethil: “Obviously, winning as manyoffline tournaments as possible, but a long-term goal would beprobably trying to become the best team internationally, wehaven’t played that many Asian teams so far, so I don’tknow how good they are but short-term I would say like focusing onthe offline tournaments that are coming up and long-term it’sprobably trying to be the number one team and consistently tryingto be that team.”

-Do you have any advice or thoughts you’d like toshare with your fans or other aspiring competitiveplayers?

Vonethil: “You should never be afraid ofbeing vocal. This game relies a lot on combining ulties and such,so it’s always important that you talk with your teammates.Let’s say if you’re playing a Tracer and you have aPulse Bomb and you have a teammate who has Graviton up, it’sreally important that you two communicate and combine those ultiesbecause you can probably wipe the whole enemy team by using onlytwo ulties. That’s only because you’ve been vocal. Ifyou really wanna improve as a player, it’s really importantthat you play as a team, like you can’t really improve thatmuch by spamming ranked and so on, you need to be scrimming otherteams, you need to be working together and that’s how you getthe best practice possible. It’s obviously important that youplay the game but it’s also really important that you watchVOD’s and so on and you see which mistakes you’re doing andyou try to improve on them, you can’t just play the game andexpect to become a better player because you have to have thatall-around work of the game if you really want to improve. Sorecord VODs, watch them through and try to improve as much aspossible.”

-Okay, I think we can wrap it up. Any finalshoutouts?

What are your thoughts on the interview with Vonethil? Let usknow in the omments below or by tweeting us – @GAMURScom.