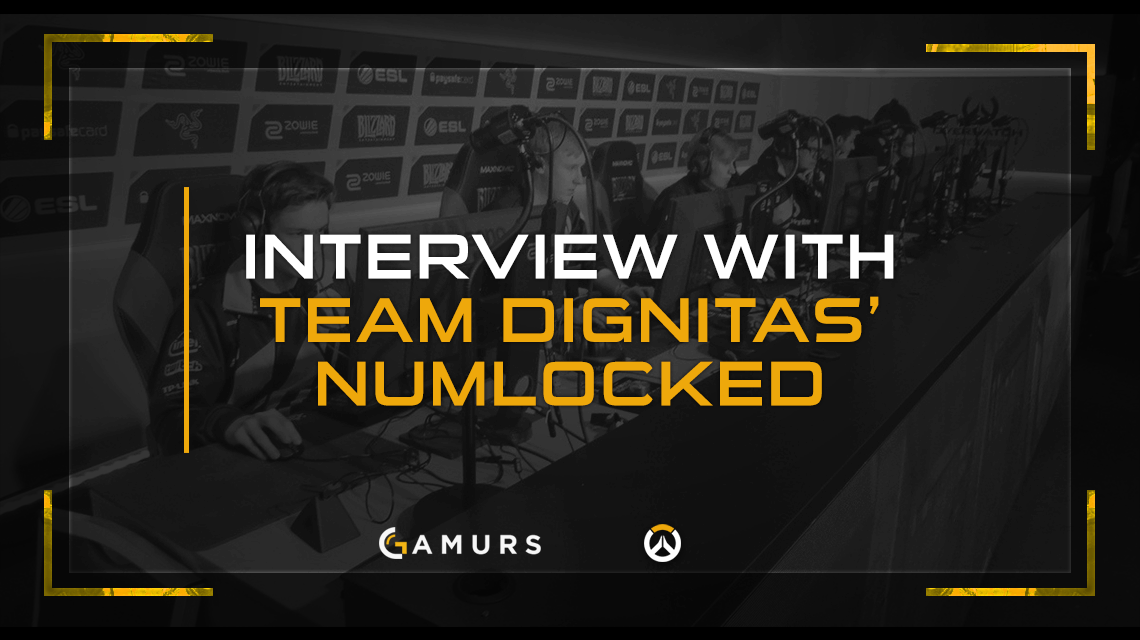 We sat down with Seb “numlocked” Barton, the main tank and leader of Team Dignitas to talk about Overwatch as well as himself and the team. Let’s get to know him better!

So we had a small introduction about you, but could you tell me a bit more about yourself?

numlocked: Yes, so I am the main tank and captain for Team Dignitas. I’ve played Overwatch since the beta and before that I’ve played League of Legends and Team Fortress 2 professionally.

You said you’ve played Team Fortress 2 competitively before, but how did the transition to Overwatch happen, what do you like most in Overwatch and how would you compare it to Team Fortress 2?

numlocked: I think the biggest comparison between the two is the downtime between the fights. There’s a lot of setup time before the fight actually happens. It’s not constant fight as with most kind of arena-based FPS games. With TF2 and Overwatch, there’s a lot of downtime to set on how you’re gonna do the next wipe, how you’re gonna do the next push and I think the transition mostly happened because my old teammates from TF2 decided they wanted to play Overwatch and I said “yeah, why not, let’s play together” and I ended up kinda like falling in love with Overwatch and it’s the most fun I’ve had in an FPS since TF2 really.

How did the opportunity come around to get into Team Dignitas and how is it like to lead a team in-game?

numlocked: So I joined the team way before we joined Team Dignitas and I kind of got approached because they were looking for a tank at the time and I previously played tank for G2 Eports. I trialed with them and then in the next day they decided to pick me up and then we lost a couple of players here and there between February and now so I ended up becoming the in-game caller as well. And it’s fine to be the in-game leader. I mean people tend to listen and even though we’re a bit on the run at the moment, previously we’ve done really well. I think for the entire of July we’ve won pretty much everything, almost. As for Team Dignitas, we were Creation eSports previously and they were interested in buying us basically, and then they had some talks to each other and it all worked out very conveniently.

Who is your favourite hero in-game and do you enjoy the current meta?

numlocked: My favourite hero is probably a toss between either Roadhog or Winston. I really enjoy these two and I don’t think a lot of people enjoy the tanks, especially those two because they’re kind of non-skilled heroes, Winston in particular, but I think Winston is a lot of fun because he’s so annoying. They’re both heroes that people find annoying to play against, which makes it fun for me. In regards with the current meta, I enjoy it more than what the next meta is going to be, which will be the three tank/three support thing. I don’t think anyone is looking forward to playing that. So yeah, the current one I’m enjoying a lot more than the previous or the future ones.

You are in charge of making some changes in Overwatch, what would you change?

So a few days ago you competed at the ESL Overatch Atlantic Showdown. How was the overall experience and what do you think went wrong and you didn’t do as well?

numlocked: The experience was fun itself, playing the first international pro Overwatch tour and see us stacked up against others in an international competition. I think that overall we didn’t do too badly. I mean we had three close maps, everything except King’s Row was close. In the first map in King’s Row against EnVyUs we made a lot of huge mistakes that kind of cost us the entire series. I think the mistakes we made were like, little things that amount to big mistakes against the top teams. So like, our focuses, our ultimate usage, things like that when you make mistakes in those areas against other big teams and they don’t make those mistakes, it costs you highly, and that’s why we went out so early.

So what are your goals for Overwatch this year and maybe the first months of the upcoming year, both as a team and as a player?

numlocked: I think we just wanna set ourselves again at the top of Europe and iron out those mistakes that we seem to make often, make sure that we’re more consistent than what we have been currently and we wanna play super well at ELEAGUE, that’s our main focus.

numlocked: Yes, shoutout to Team Dignitas and all the sponsors.