League of Legends is a game that is constantly evolving. With every couple of months comes a new patch that completely changes how the game is played. This is the reason why it’s so common for a player to go from being one of the best one day, to being irrelevant the next. So when a player is able to able to remain relevant for a long period of time it begs the question, how do they do? In his fifth year of professional play, approaching his fourth World Championship appearance, there are few players whose careers can match the longevity or achievements of Kim “PraY” Jong-in. This is his story and this is how he’s done it.

In the spring of 2012, PraY, then known as Troll Kim, was just another amateur player trying rise up the Korean Solo Queue ladder. Even though he was quickly making a name for himself, the future Korean champion had no intention of ever going pro.

“I played for the fun of raising my rank in the Korean server, but I got an offer to join a pro team,” he told Athlete Media. “I refused at first, but he kept convincing me.”

PraY eventually relented and joined the newly formed Najin Sword for the 2012 Summer Split. As the name suggested, this new team was going to exemplify aggression, and there was no other AD Carry better suited to that than PraY. Partnered with another solo queue prodigy in Jang “Cain” Nu-ri, the pair meshed well immediately. Together, they quickly made it known that if you stepped into lane with them, you better be prepared to fight. While other bottom lanes would attempt to safely farm through the laning phase, the Najin Sword bottom lane had other ideas and the duo pushed the lane with a reckless disregard for the enemy jungler.

Opponents were then left with a choice; either send your jungler to try and shut the duo down, leaving superstar top laner Yoon “MaKNooN” Ha-woon and jungler Cho “Watch” Jae-geol to make plays top, or surrender your bottom tower. This spirited team found immediate success, making it all the way to the Season 2 League of Legends World Championship in its first split. After going undefeated in the group stage, Najin Sword was knocked out in the quarterfinals by the eventual champions, Taipei Assassins. PraY’s first foray onto the international stage was an exclamation point at the end of a stellar rookie season. The world was now on notice.

PraY had arrived, and he was here to stay. 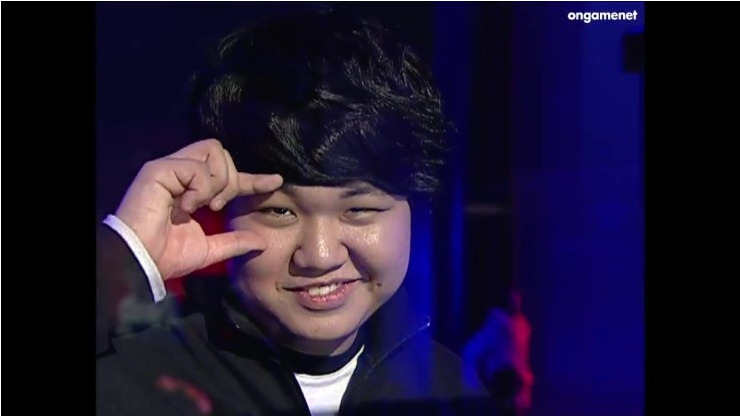 After such a memorable rookie split, all eyes were on PraY and Najin Sword coming into Season 3. The squad’s preseason started decently, making it to the finals of MLG Dallas. PraY’s exemplary team-fighting prowess was a major takeaway from the tournament. The team had shown that it was major contender for the upcoming season and PraY looked to build on his stellar rookie season. After a surprising failure to qualify for the IPL 5 tournament, Najin Sword looked to bounce back at OGN Winter. On the back of some outstanding performances by PraY on Miss Fortune and Ezreal, Najin Sword met Azubu Frost in the finals. From the outset of the finals, Frost’s strategy was clear: target PraY. The first game saw Frost ban away Miss Fortune and pick away Ezreal, two of PraY’s best champions coming into the finals. Little did Frost know that Najin had an ace hidden up its sleeve. It was time for PraY and Najin to reveal their secret weapon: Twitch. At this point, Twitch was perceived to be a lower tier pick, so ADC players were not overly experienced at playing with or against it, all except for PraY. Caught off guard by this off meta pick, Frost never really got it together and Najin Sword swept the finals 3-0. PraY played Twitch in all three games, decimating Frost in team fights and continuously bouncing back from their repeated attempts to shut him down. Twitch would go on to become one of PraY’s signature champions, earning him the moniker “Twitch King.” With the team’s string of choking in finals broken and PraY looking like the best ADC in Korea, it felt like Season 3 would be the year of Najin dominance.

But alas, it was not meant to be. The rest of the season was a tumultuous series of highs and lows for Najin Sword, from winning NLB Summer to the loss of MaKNooN. With MaKNooN’s departure, it was up to PraY to step up as the team’s primary carry, and step up he did. Through ieverything that happened, Najin Black Sword, as they were now known, still managed to qualify for the Season 3 World Championships. As Korea’s No. 1 seed, Najin Black Sword was able to bypass the group stage. This allowed Najin to deny its opponents insight into the team’s strategies, whilst being able to learn from its opponents’ group stage matches.

At the time, Najin had the best bottom lane in Korea and the introduction of substitute Mid Laner Kim “Nagne” Sand-moon helped shake things up and make the squad even more unpredictable. All in all, fans were optimistic about Najin’s chances of claiming the championship. On the backs of Nagne and PraY, Najin Black Sword started its Worlds campaign on a high note, dispatching fan favourites Gambit Gaming. The Gambit bottom lane was unable to contend with the laning prowess possessed by Najin’s duo lane. The hype didn’t last long, though, with Najin Black Sword being eliminated in the next round by SK Telecom T1. The five game series showed that either team could have won it all in the end, but SKT walked away victorious. Najin could not compete with the unstoppable force of nature that was SKT mid laner Lee “Faker” Sang-hyeok. The usually dominate PraY struggled in this series, as his laning left much to be desired and his team fighting skill was completed negated by Faker. This would be the beginning of the fall of PraY.

Down, But Not Out

By the time Season 4 began it was clear that the Najin players had become shadows of their former selves. The team had always struggled with high level shot calling and picks and bans, but they were always able to overcome these weaknesses through strong laning and team fighting. Season 4 saw more and more teams realizing how to abuse Najin’s flaws in order to claim victory.

In both Champions Winter and Champions Spring, Najin Black Sword failed to make it past the group stages and into the playoffs domestically, with the entire team putting in consistently lacklustre performances. The once dominant PraY had been reduced to a Twitch one trick pony, a far cry from the polarizing figure from the previous two seasons. In the end, there was a price for these disappointing results and in May of 2014, PraY left Najin Black Sword. Fans were in shock by this sudden departure. Speculation grew as to where PraY would end up next. Even though his recent form had been subpar there wasn’t any doubt that PraY would return. Months went by and with no news of his future it appeared that PraY would never come back. It would later come out that after his departure from Najin, PraY did not receive a single offer to join another team. The new generation of ADC players had taken over and there wasn’t any room for PraY in this new era. This all changed in the Season 5 preseason when it was announced that PraY would be the ADC for the HUYA Tigers.

The Tigers were a ragtag team made up of pros that had been discarded by their previous teams. Prior to the start of the season, there was little hype for this new roster. In turn, there was a great deal of uncertainty surrounding PraY’s return. Coming into Champions Spring 2015, English LCK caster Erik “DoA” Lonnquist expressed the thoughts of the community, “Will he be able to perform? He did not look very good over most of 2014.” It wouldn’t take long for these doubts to disappear.

Partnered with Kang “GorillA” Beom-hyeon, PraY showed that he was still a high level player after his hiatus. In the spring, PraY’s Corki was a force to be reckoned with and was a major part of the Tigers’ top-three finish. However, when playing champions not named Corki or Lucian, his performances were far less impressive.

As the season progressed, there was a noticeable shift in PraY’s champion selections. In the past, he had gravitated towards hyper scaling carries like Twitch, Vayne and Caitlin, but as 2015 progressed, his champion pool shifted towards more utility based picks. His Ashe became a stable pick for the Tigers, as it had the ability to gain extra vision using Hawkshot and the increased pick potential from Enchanted Crystal Arrow. The evolution in PraY’s play translated into results for the KOO Tigers, ending the summer split as the No. 2 seed for Korea going into the 2015 World Championships.

Despite two losses to the Flash Wolves in the group stage of Worlds, the Tigers really found their stride in the knockout stage. They began by avenging their recent Champions Summer playoffs loss to KT Rolster in the quarterfinals, and continued on to demolish the European powerhouse Fnatic in the semifinals. There was now only one obstacle between PraY and the World Championship that had continued to elude him ,and it came in the form of the last team to crush his dreams at Worlds: SK Telecom T1.

Throughout the tournament, PraY continued the utility focused role that the team found success with during the season. His high-quality Ashe play and use of Kalista’s Fate’s Call to set up strong team fight engages laid the foundation for the Tiger’s run to the finals. But much like his last outing, PraY could not overcome SKT at Worlds, losing to them decisively in the finals.

Fast forward to now, one year later, on the cusp of the 2016 World Championships and PraY and the Tigers have never looked stronger. They have finally conquered their team’s championship drought, winning Champions Summer 2016 and locking in the No. 1 seed for Korea at Worlds. After a spectacular season, PraY has regained his spot as one of the best ADC players in the world and is a top candidate for MVP coming into the tournament. In his first Worlds, he made it to the quarterfinals. In his second, he made it to the semifinals. In his third, he made the finals. Now, in his fourth appearance, with all the momentum in his favour, this could finally be the year that PraY cements his legacy and takes home the elusive World Championship.

Will PraY finally take hom the championship? Let us know in the comments below or tweet us @GAMURScom.