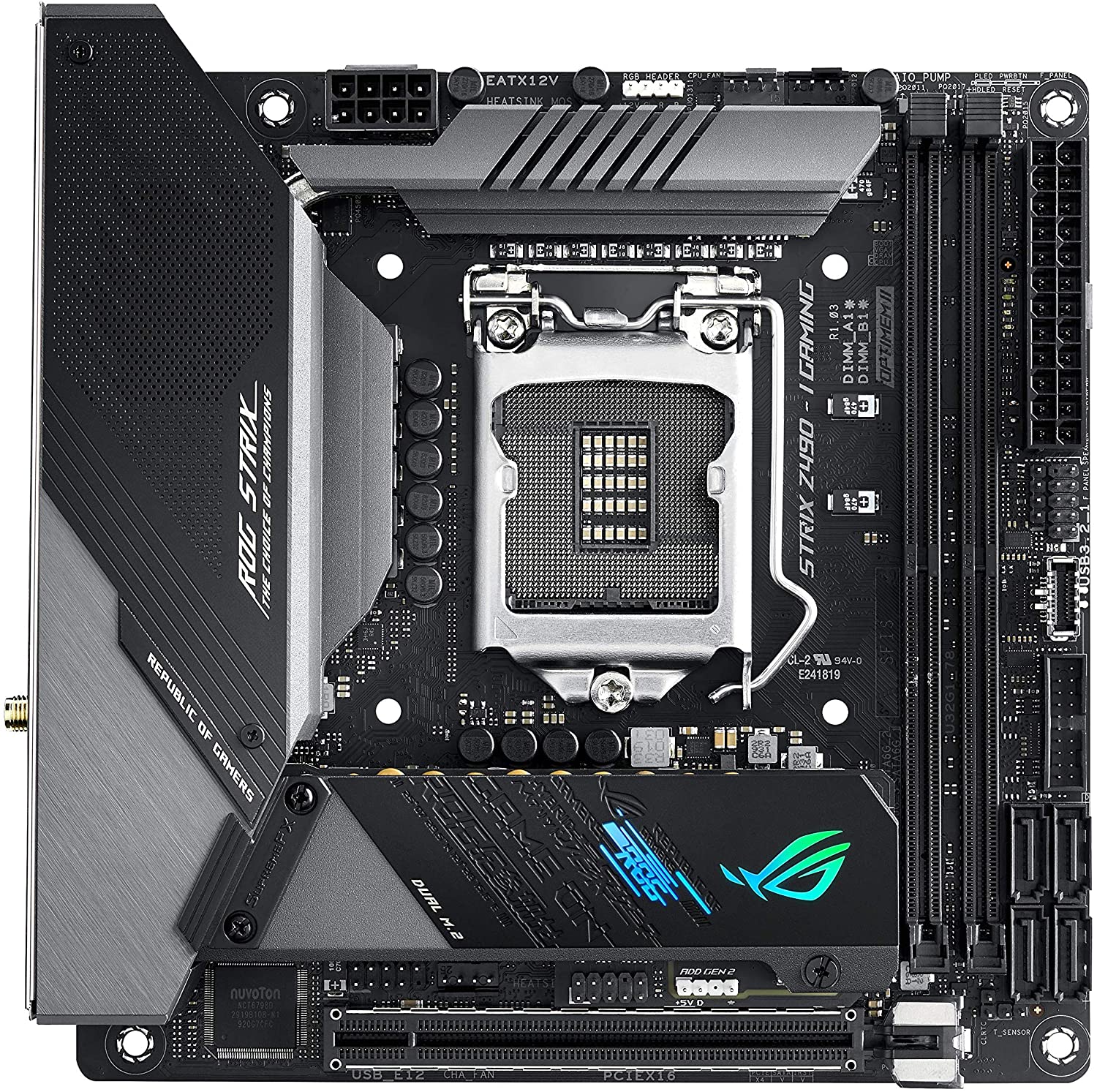 Some Z490 motherboards are designed for more general use, while others are specifically for gaming. Gaming motherboards boast higher performance than regular motherboards, with enough power to run the most demanding processors. Most Z490 gaming motherboards have high RAM capacity and several M.2 and PCIe slots to add NVMe drives and graphics cards. High-end Z490 motherboards even have built-in wireless adapters with up-to-date Wi-Fi 6 capability and optical ports for sound.

These are the five best Z490 motherboards.

MSI’s MEG Z490 Godlike is the company’s flagship Extended-ATX motherboard designed for the best gaming performance possible. Everything from the voltage regulator module (VRM) to the networking components is top-notch, and it also has advanced features like an OLED screen to display system information.

Performance is the main reason to get the MEG Z490 Godlike. It has a 16+1 stage VRM to ensure constant, reliable power to the processor. VRMs regulate the power going to the different components of the motherboard, and more phases allow it to run cooler and more efficiently. When examining VRM capacities, the number before the plus sign indicates the phases dedicated to powering the processor. The numbers after the plus sign refer to the phases that power other motherboard components.

There are ample slots on the MEG Z490 Godlike to add components like RAM and NVMe SSDs. This model has four RAM slots that handle up to 128GB of DDR4 RAM and three PCIe 3.0 slots. In addition, three M.2 slots are available on the motherboard, and there are another two on the supplied add-on card.

One of this motherboard’s unique features is the OLED screen. This 176-by-48-pixel display is called the Dynamic Dashboard II, and it displays critical system information like temperature and CPU speed. The screen also displays custom GIF files created by the user.

Networking is another strong point of this motherboard. It has two RJ45 ports, with one supporting 10Gbps and the other supporting 2.5Gbps. There’s also Wi-Fi 6 capability with speeds up to 2.4Gbps.

The MEG Z490 Godlike boasts enough features to satisfy the most demanding PC builder, but it has a couple of disadvantages. Its E-ATX format limits the number of compatible cases, and it’s also costly.

The Z490 Aorus Xtreme is Gigabyte’s answer to the MEG Z490 Godlike and shares many features and characteristics. Some of the features carried over from the MEG Z490 Godlike include the number of VRM phases, networking capabilities, and expansion slots. The high price also carries over, and both motherboards sit in a similar price bracket.

One area where the Z490 Aorus Xtreme differs from the MEG Z490 Godlike is the lack of an OLED screen. There’s no OLED screen on the Z490 Aorus Xtreme to display system information, but it makes up for it by including a USB digital-to-analog converter (DAC). The DAC enhances the sound quality and is easy to use. It plugs into the PC’s USB-C port and has a 3.5-millimeter port for users to plug their headsets into. Users can also attach the DAC to mobile phones and tablets with USB-C ports to improve the sound quality.

Buyers can expect the Z490 Aorus Xtreme to perform similarly to the MEG Z490 Godlike, but it also has similar disadvantages. Both motherboards cost a fortune and use the larger E-ATX form factor.

Those looking for a mid-range option might consider the MSI MPG Z490 Gaming Carbon Wi-Fi. This motherboard doesn’t cost as much as the previously listed motherboards but still has some comparable features like fast network speeds, numerous expansion slots, and a similar RAM capability.

There are enough RAM and PCIe slots on the MPG Z490 Gaming Carbon Wi-Fi for most users’ requirements, sitting just behind the Z490 Aorus Xtreme and the MEG Z490 Godlike. The MPG Z490 Gaming Carbon Wi-Fi’s four RAM slots with 128GB RAM capability and three PCIe slots put it on par with its more expensive counterparts. Where it lags behind is having two M.2 slots instead of three.

While the network features don’t compare to the Z490 Aorus Xtreme and MEG Z490 Godlike, they are still adequate for most games. There’s no 10Gbps LAN port, so users are limited to 2.5Gbps. Wi-Fi 6 is still included, and users get speeds of up to 2.4Gbps.

Budget-conscious buyers looking for an affordable Z490 motherboard can take a look at the Asus TUF Gaming Z490-Plus. It’s an ATX motherboard that fits in most cases and supports the latest Intel processors, but it’s in a lower price bracket than the high-end MEG Z490 Godlike and Z490 Aorus Xtreme.

For a budget motherboard, the TUF Gaming Z490-Plus boasts some features that match the more expensive MPG Z490 Gaming Carbon Wi-Fi. The 12+2 VRM is similar, and so are the four RAM slots with a 128GB capacity. Another shared feature found on more expensive motherboards on this list is Wi-Fi 6 capability.

Asus’ TUF Gaming Z490-Plus isn’t quite in the same league as the MEG Z490 Godlike or even the mid-range MPG Z490 Gaming Carbon Wi-Fi when it comes to features and performance. But it costs a fraction of the price and offers an affordable foundation to build a gaming rig.

Some users prefer compact PCs to save space. The Asus ROG Strix Z490-I has a mini-ITX form factor compared to the other motherboard on this list to fit into smaller cases. The smaller size of the ROG Strix Z490-I means it can’t match the MPG Z490 Gaming Carbon Wi-Fi in terms of performance. But it still has a strong feature set and provides a great platform for smaller builds.

Considering the size of the ROG Strix Z490-I, it’s understandable that some features are omitted. Compared to the other motherboards listed so far, it only has an 8+2 phase VRM supplying power. When it comes to slots, there is only one PCIe slot and only two M.2 slots. Instead of four RAM slots, the Asus ROG Strix Z490-I only has two slots with a maximum capacity of 64GB.

Despite the sacrifices, the ROG Strix Z490-I has networking capability comparable to the MPG Z490 Gaming Carbon WiFi. It includes Wi-Fi 6 capability with a top speed of 2.4Gbps and a 2.5Gbps LAN connection.

Buyers should only consider the ROG Strix Z490-I if they are building a compact PC. Considering its compact size and affordable price, this motherboard offers outstanding value for small form factor builders despite its reduced features.