He almost completed the game in under 19 minutes. 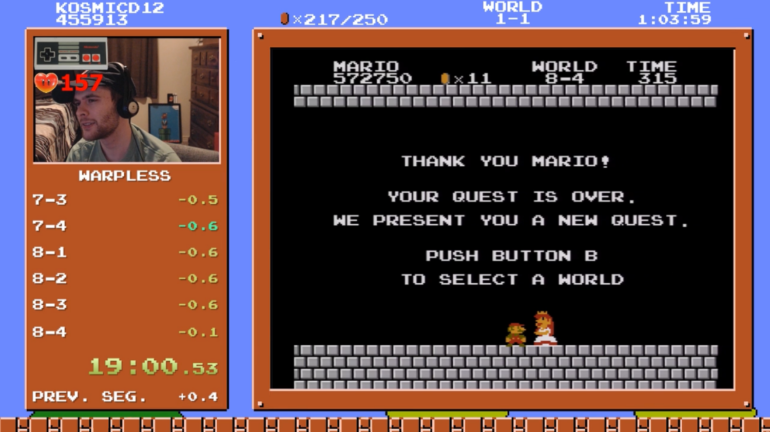 A speedrunner has broken the world record for the fastest run of Super Mario Bros. on the NES, and his run almost became the first in the world to be completed in under 19 minutes.

Kosmic would’ve finished this run in under 19 minutes if he hadn’t hit Bowser in the last segment of the run.

“Are you serious?” Kosmic said after finishing his run. “Bowser hit me.” Despite breaking the world record, he stared at the screen with frustration and kept mentioning that last moment when he was hit.

Such a small difference in time between Kosmic’s last world record and this recent one can only be measured thanks to specialized software. It automatically tracks their start and end times in each run and uses certain moments of the game to set when the segment is starting or finishing. Kosmic and other speedrunners also have to follow certain rules to have their runs validated by the speedrunning community.

With his successful attempt, Kosmic seems ready to reproduce it and go under 19 minutes in his next world record attempt. He also has the second-best time in Super Mario Bros. for the any percentage category, which allows the use of warp zones. In secondary categories, Kosmic is the world-record holder for both warpless and any-percentage all-stars runs, which add just a few seconds to his standard runs.