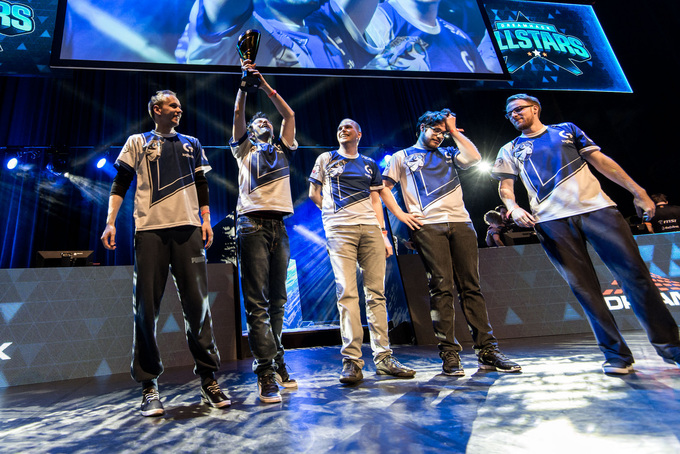 Brazil. Known for its extreme climate, passion for football and various wildlife. Not however known for being a region strong in the growing world of eSports. More recognisable areas of success would be Korea in League of Legends and Europe in Counter-Strike but this year the deprived South American nation announced themselves as a wildcard that could throw top international teams off their game.

Luminosity Gaming walk on stage for their semi-final match at Dreamhack Winter.

The Brazilian Counter-Strike team Luminosity Gaming have been through a grinding but arguably successfully first season on the international stage. The team has played under multiple organisations this year continuing to bring success back home to their country even with all the changes behind the scenes. The first organisation they played under was KaBuM where they attended the MLG Winter X-Games in Aspen, despite not being able to make it to the playoff stages of this tournament they showed signs of a team in the making with the victory over their American counter-parts Cloud9 on Mirage which would soon become one of their strongest maps. The next appearance KaBuM made was at the ESL One Katowice offline qualifiers where victories over INSHOCK and Team Dignitas sealed their qualification for the first major of 2015. It was at this point the Brazilians were acquired by Keyd Stars as they prepared to make their mark in Poland. On their arrival in Katowice they faced a challenging group that featured two of Europe’s hallmark teams the legendary Ninjas in Pyjamas from Sweden and HellRaisers a CIS team packed full of firepower. They opened up their campaign with a disappointing loss against the swedes although they managed to fight back and earn convincing wins against HellRaisers and Counter Logic Gaming to advance to the quarter finals. It was there that they met the hometown heroes Virtus.pro who were one of the favourites to win the entire event due to the home soil advantage. They were crushed in two out of the three maps in the series losing 16-4 on Mirage and 16-1 on Nuke but stole an overtime thriller on Overpass 19-17. Their run to the quarterfinals was the first for a nation outside of Europe or North America and the prize for their playoff succession was a direct invitation to the following major tournament. The transition period between Katowice and Cologne was not as fruitful they played in the ESL ESEA Pro League Season 1 finals where despite a best of one win over Team SoloMid they were unable to progress further than the quarterfinals where they faltered to a dominant Fnatic side. Following, ESL ESEA was ESWC which would be their last internationally recognised tournament under the Keyd Stars name; here they failed to even make it out of the group stage even with a seemingly favourable group for the up and coming team. They were proving themselves to be a team that could only upset in best of one series and not the international threat emotionally driven players such as FalleN and fer wanted them to be.

With the second major of the year, ESL One Cologne, right around the corner the Brazilians were picked up by American organisation Luminosity Gaming which had fielded some strong line-ups in the past they seemed to have a team behind them that believed in the potential that strong riflers such as Coldzera and FalleN possessed inside. With their qualification secured way back at Katowice they headed straight into the group stage of Counter-Strike’s biggest tournament of the year. A dominating victory over new international line-up Team Kinguin, that had a wide array of proven talent such as ScreaM and Maikelele, cemented themselves as playoff contenders. They met EnvyUs’s fiery new roster that featured phenomenal AWP player KennyS but it was Apex who stole the show as Luminosity narrowly missed the chance to qualify for the playoffs as the first seed even with FalleN firing on all cylinders. They would now have to play FlipSid3 for the second and final seed, where another convincing performance from captain FalleN saw them scrape through in overtime on Cobblestone. Brazil had been able to repeat their feat at Katowice now earning their chance to rid critic’s speculations of them as being best of one wonders. However, playing reigning champions Fnatic was never going to be easy and ultimately they defiantly dropped in the quarters showing signs of resilience in a game that was always heading one way. There was a short time period between Cologne and Dreamhack Cluj-Napoca due to demand for PGL to produce the tournament they requested that it be hosted in their country of origin Romania which led to the third and final major of the year being much earlier than expected. As a result of the South Americans second playoff run of the year they again automatically qualified for the major but continuing their trend they failed to advance further than the quarters-finals even with a win against Fnatic under their belts in the group stage. Post Cluj-Napoca there were a few tournaments being hosted in North America where they had recently become situated but even against regional competition the team had seemingly stagnated and the once promising line up fell further into despair. IEM San Jose would be the last for best of one champions Coldzera, FalleN, Fer, Steel and Boltz as a much needed roster shake-up would follow their exit courtesy of Natus Vincere.

Fnx, one of Luminosity’s newcomers, competing at Dreamhack Winter 2015.

The roster change saw the team cut ties with Steel and Boltz replacing them with two youngsters from Brazil’s sister team Games Academy Fnx and Taco. The two appeared to be in-experienced and un-proven on the world stage making the transfers a huge gamble considering that the Faceit Season 3 Finals also known as Dreamhack Winter 2015 worth $250,000 was merely a few days away. Expectations were low as the South Americans came in exiting a run of bad results and playing on little practice with the two newcomers and they were seemingly proven true as Fnatic 16-0’d them on dust2 without a single player earning over ten frags. However, the broken Brazilians fought for their place in the playoff stages as they handily beat Cluj-Napoca champions EnVyUS in a best of three series, a shock result considering the previous day’s performance and the calibre of the opponent they faced. Winning one of their very first best of three series over a top five team the revitalised squad carried their momentum into the quarterfinals where they faced a Ninjas in Pyjamas side that was facing problems of their own. Although, a legendary team like NiP should never be given respect and Luminosity showed none as they kicked the home team out of the tournament 2-1 only allowing them to steal a map in overtime. Two best of three victories over top teams in a row left the crowd, casters and analysts stunned. Time for the team’s first semi-final in a big tournament and they faced Team SoloMid. TSM started off strong blowing the team out on mirage but Luminosity enacted revenge in the following map winning 16-6 on Overpass with captain FalleN boasting a 1.64 rating. With Inferno standing between Luminosity and the grand final they won a close overtime game edging out the Danish superstars with 4 out of the 5 players topping the scoreboard and newcomer Fnx leading the charge.

They now headed into the grand finale against Fnatic who dealt the first blow between the two teams in the group stages. With Taco and Fnx proving their worth as solid players they looked to bring home a title for Brazil. In defiance of the group stage horror they closed out the first map on Train 16-9 as the Swedes only saw two round wins in the second half of the game. But, with such talented players in tournament MVP olofmeister and twist of fate sniper JW the series headed Fnatic’s way as the team fell on both Cobblestone and Inferno making Fnatic champions of Dreamhack Winter and leaving the Cinderella story incomplete. In spite of the heart breaking loss to Fnatic in the final Luminosity have many positives to take from the weekend. Three best of three wins under their belts, their first grand final and confidence gained from such wins with FalleN being awarded best AWPer and best in-game leader. Who knows maybe Luminosity’s Cinderella story is not complete and that their next major tournament will see the win they so desperately want on the big stage.

All stats and images from HLTV.org