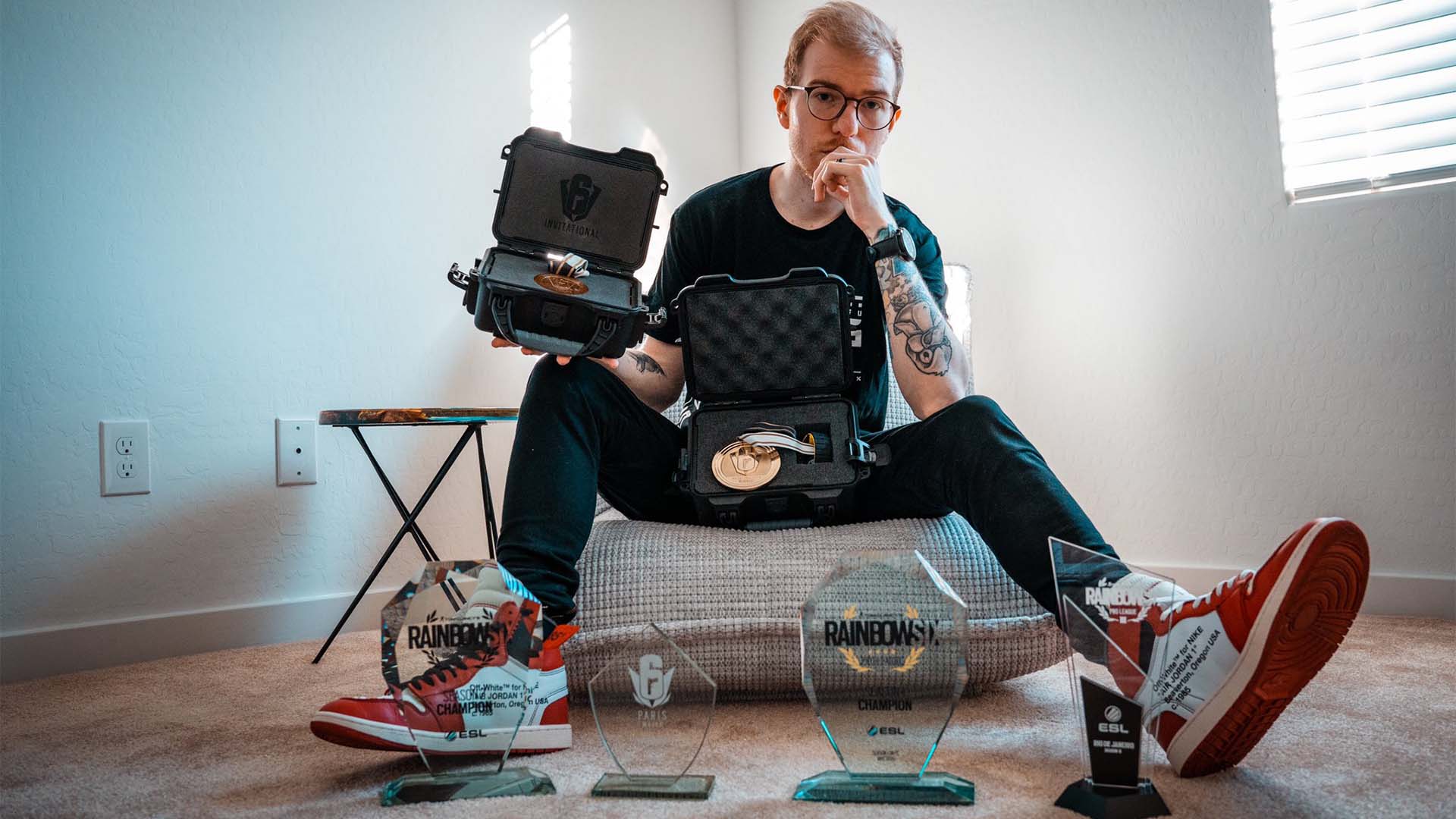 Former G2 Esports member Pengu is a famed member of the Rainbow Six Siege community. Retiring in March 2021 after five years of competitive play, Pengu switched to full-time streaming on Twitch and YouTube of R6S content. He currently has a following of 987,000 subscribers on his Twitch and 617,000 on YouTube.

Users can connect the headset to either a PC or gaming console with the wireless USB dongle. Like its other wireless peripherals, the G Pro headset uses the manufacturer’s proprietary Lightspeed technology for a low-latency connection.

Pengu, like many othes, prefers Logitech G’s Pro wireless mouse. It’s one of the most popular mice today among professional gamers and streamers, especially with recent advancements in wireless mice technology.

The G Pro Wireless runs off Logitech’s LIGHTSPEED 2.4GHz wireless technology, which sports latencies on par and sometimes even faster than wired mice. The ambidextrous design and modular side buttons makes it ideal for left and right-handed gamers.

The mouse’s sensitivity steps, macro buttons and LED colours can be customised through the Logitech G Hub software suite. The G Pro Wireless’s shape is also a relatively safe design, with the buttons and mouse wheel all featuring crisp clicks with minimal post-travel.

Another Logitech G peripheral in Pengu’s setup is the G Pro mechanical keyboard. The G Pro uses Logitech G GX Blue Click switches that are tactile and clicky. Keys illuminate through the customizable RGB lighting behind the keys, which is modifiable in the G Hub.

Users can configure lighting profiles through G Hub, which will display even if G Hub software is closed. However, the RGB lights will be static as opposed to moving patterns. The G Pro keyboard also supports 12 programmable F-keys.

Pengu has a dual monitor setup with an AOC AG251Fz and ASUS ROG PG259QN.

The AOC AG251FZ gaming monitor comes with a 240Hz refresh rate and a 1080p resolution screen. While the monitor has picture quality features like AOC’s proprietary color and shadow control, it doesn’t have HDR or game genre profiles like some of its competitors. It does have AMD FreeSync, though.

Accompanying the other Logitech G products in Pengu’s setup is the G640 mousepad. This mousepad comes in a large and square 4.72-inch by 4.72-inch design with low friction cloth material on top. On the bottom of the mousepad is a rubber base to hold it in place during use.

For his webcam, Pengu uses the Sony a6000 digital camera. This camera can record in 1080p in both 24 and 60 frames per second. It comes with a 24.3-megapixel sensor, enhanced by Sony’s Hybrid AF autofocus. The autofocus feature is handy for streamers since it can refocus to the most precise shot possible in less than a tenth of a second.

Pengu’s Shure SM7B microphone is another favorite among streamers. It uses a cardioid polar pattern condenser to provide a warm vocal performance on playback. It is also compatible with audio interface software by using an XLR cable connection.

To help with recordings, the SM7B has an Air Suspension Shock Isolation and pop filter; the shock isolation acts as a shock mount that reduces physical sound pickup. For protection against electrical humming from computers and monitors, the SM7B has electromagnetic shielding.

Pairing with Pengu’s Shure Sm7B is the TC-Helicon GoXLR sound mixer. This mixer comes with a four-channel physical mix board for real-time audio mixing. Users can add vocal effects like reverb, pitch shift and echo using the modulation knobs on the device during recordings. It also has a programmable soundboard and RGB lighting to match the aesthetics of other lighting-enabled peripherals and hardware.

Pengu’s CPU is an AMD Ryzen 9 3950X. This processor has 16 cores and 32 threads for unprecedented power in gaming and content creation. It comes with 72MB of GameCache memory and is compatible with PCIe 4.0 devices.

The Ryzen 9 3950X has a maximum clock speed of 4.7GHz when overclocked. It’s a generation older than AMD’s Ryzen 5000-series CPUs, with as much as a 20 percent difference in applications and a double digit difference in games. It’s still an absolute powerhouse for content creation and gaming, however, especially for those working with Adobe applications, programming and 3D rendering.

With a 2080 Ti installed, users have access to real-time ray tracing and the machine-learning powered DLSS upscaling. Ray-tracing at native 4K resolution and 60 FPS — especially games that use multiple forms of ray-tracing, like Control or Cyberpunk 2077 — might be out of the 2080 Ti’s reach. But with the addition of DLSS, the 2080 Ti is more than capable of playing most games at 4K at 60 FPS, and games at 1440p at very high frame rates.

Like the Ryzen 3950X, finding a 2080 TI for a good price is still challenging because of the chip shortage, a situation Nvidia themselves expects will continue until at least 2023 . The chip shortage isn’t predicted to improve until at least 2023, according to the CEO of Nvidia. Until then, its expected the inflated prices of GPUs will remain high for the foreseeable future.