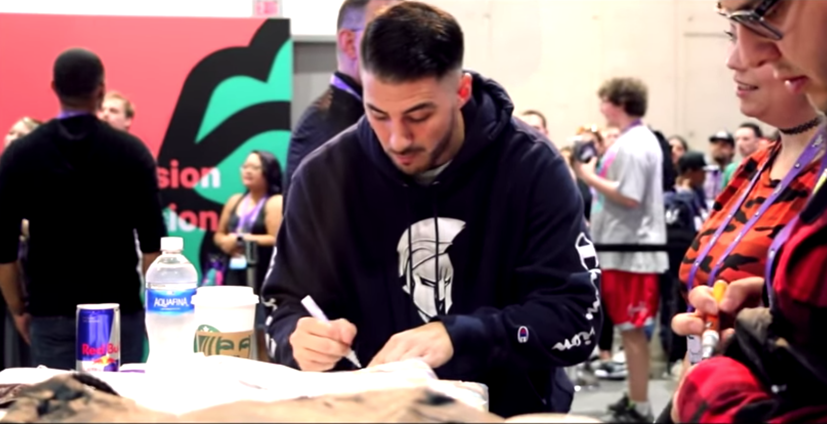 Nick “NICKMERCS” Kolcheff is one of the most well-known streamers, bringing in huge audiences whether he’s streaming Fortnite, Warzone, or anything else.

NICKMERCS began his career creating Call of Duty content on a console, the player gained a reputation for his high skill and competed in many tournaments over the years. The streamer’s online exposure grew substantially when he broke the world record for most squad kills in Fortnite. Soon after this, he and his squad smashed their own record again to bring the total to 55.

That isn’t the only record NICKMERCS would hold to his name though. He and a friend also once broke the record for most kills as a duo with a total of 46 between them.

Over the years, he has made substantial improvements to his streaming setup, most recently in December 2019, investing in a top-of-the-line streaming studio to take his quality to the next level.

While you don’t need a dedicated studio to break records like NICKMERCS, investing in quality gear will help you produce a high-quality stream and play to your fullest potential.

Gaming on a PC with a controller is not the most common approach, but NICKMERCS makes it work. Using a controller will generally put you at a disadvantage due to the limited number of buttons that can be used. Another reason it can be difficult is having to remove your thumb from the joystick when you are required to press specific buttons.  There is a way around these problems though.

Scuf Gaming has solved this issue by adding customizable buttons to their controllers. This gamepad features paddles on the back. You can map buttons to them, to get access to all inputs without removing your thumbs from the sticks. You get any input immediately available, without having to stop aiming.

NICKMERCS has a partnership with Scuf controllers, choosing to use his signature model the Infinity4ps Pro. Their controllers are some of the best, with a high-quality finish across the entire build.

If you are going to be gaming on PC with a controller, it is necessary to get one that is optimized to produce the best performance. A Scuf is a great choice. You’ll find plenty of controller players across esports that stick with these gamepads.

NICKMERCS primarily made his name in playing with a controller, but that doesn’t mean he only uses that input. Over the years he’s branched out and now plays using a normal mouse and keyboard alongside the controller. His picks for these accessories are just as high-quality as the rest of NICKMERCS’ streaming setup though.

The Logitech G Pro is one of the most widely used gaming mouses in esports and gaming. The mouse features seven buttons overall, perfect for games with more inputs like Fortnite. The mouse also has a 1millisecond report rate connection, for very accurate gameplay.

This mouse features a 25K Hero sensor. This can go up to 25,600 DPI, offering some of the most responsive reporting of your movements you can find. There are clear reasons why this mouse is part of NICKMERCS’ streaming setup.

The Logitech G Pro Mechanical keyboard is the second part of his alternative input set-up. Like the mouse, this is one of the best available and used by a lot of esports players.

This keyboard features mechanical switches which are designed to give the highest accuracy while providing feedback for a more natural feel while gaming. You’re getting exact and accurate inputs here, with haptic feedback that makes key presses decisive.

This keyboard also features RGB lights, which helps it visually match the rest of your setup. Although, you might not need to go as overboard coordinating visuals as NICKMERCS’ streaming setup is. There are onboard profiles and programmable macros to help make this as well-tuned to your specific needs as possible.

Sound is one of the most important aspects of gaming. Without hearing the audio cues, you will not be able to compete at your full potential.

When it comes to the right headset there is often debate around wireless or wired. In today’s age, the difference is not that big. Technology has evolved to the point that quality loss over wireless is almost unnoticeable, along with connection speed.

A big name in the gaming headset space for years now has been Astro. Astro has been delivering quality wired and wireless gaming headsets over the past 12 years. Astro are the headset arm of Logitech, so they have the same approach to high-level gaming accessories as you’ll find in the mouse and keyboard that are in NICKMERCS’ streaming setup.

NICKMERCS has used Astros for many years as a competitive Call of Duty player. He’s likely stuck with them for so long thanks to their overall impressive quality and durability. The A50 wireless features great sound, with Astro Audio V2 onboard for clear game sound. There’s a battery life of 15 hours here, so you’re able to play long sessions without worrying.

With a high-quality microphone built into the headset, this is the perfect all-in-one communications device for anyone getting into streaming.

Having the best sound can only be matched with the best quality display. When purchasing a monitor, the refresh rate is what you’ll need to look out for more than most other factors. You want something with a high refresh rate, preferably 144hz or higher. Refresh rate is a hard limit on your FPS, so aiming high has a big payoff.

NICKMERCS’ has opted for the Alienware AW2518H for his setup. The 24.5” monitor has a lightning-fast 240hz native refresh rate as well as a one-millisecond response time. It can hit the high frame rates that you’d expect from competitive-level gaming and not add any extra lag to your performance. This monitor is designed to be adjustable too, so it’ll be a natural fit for any setup it’s a part of

Make sure that you consider the hardware you have before purchasing a high-refresh-rate monitor though. If your PC can’t hit 244, it might be overkill! Otherwise, this is a great pick for a gaming monitor.

To ensure your setup is capable of supporting a high-refresh-rate monitor, one thing you must consider is the graphics card. The choice in NICKMERCS’ streaming setup is the EVGA GeForce RTX 3090.

This is a high-level graphics card, boasting a real boost clock of 1800 MHz and dedicated RAM of 24GB. This is definitely on the highest level and it facilitates his gameplay of demanding titles in the quality needed for content creators.

This is a fairly high-powered GPU, you’ll find it can support even the most visually draining modern games. The main downside here is the price, but NICKMERCS’ streaming setup isn’t the cheapest! You’re also getting a card that is relatively future-proofed. You don’t have to worry too much about future games not being playable with this GPU.

Having a high-quality CPU is just as important as having a good graphics card. The CPU is integral to ensuring that your computer can respond to new information as fast as possible.

Nick uses the Intel Core I9-9900K processor in his gaming setup. This top-of-the-line CPU boasts a base clock speed of 3.6GHz. Having a CPU at this level ensures that your PC can handle whatever tasks it needs to regardless of how CPU intensive the process is.

Inside NICKMERCS’ streaming PC, he opts to use an even more powerful CPU, the AMD Ryzen 3900X, since this CPU has to be responsible for not only his stream but also all the lighting and security inside his studio.

While a lot of popular games don’t require a CPU of this magnitude, it is always smart to plan for the future and what upcoming games will require so you are prepared.

Having a webcam is another important part of creating a streaming setup. While it’s not a necessity, it allows you to engage with your audience further. They actually get to see your reaction to the gameplay, which makes a big difference.

NICKMERCS’ streaming camera is the Logitech C922. This camera is used by many streamers since it is high quality and cost-effective option. The 1080p 60fps camera allows for crystal clear video. The inbuilt light correction enables the camera to be used in a majority of setup locations.

This industry-standard webcam is a bargain for its price tag, and the performance it delivers is virtually unmatched even by competitors in the same price range.

The last part of NICKMERCS’ streaming setup is no less important than anything else we’ve looked at here. NICKMERCs’ capture card allows him to play console games on stream, and record his stream in a high quality. This makes it much easier to record parts of a stream for YouTube and make the most out of your time gaming.

This is a great capture card if you’re looking to add one to your setup. It operates as a pass-through so it can stream gameplay or record without hurting the 240 FPS frame rate that NICKMERCS’ monitor can hit.

This can record in 4K HDR. This might seem excessive if you’re using it for a webcam, but you’re definitely not going to be producing cheaper-looking video with one of these. This is a great pick for a capture card, it’s easy to see why it’s part of NICKMERCS’ streaming setup.