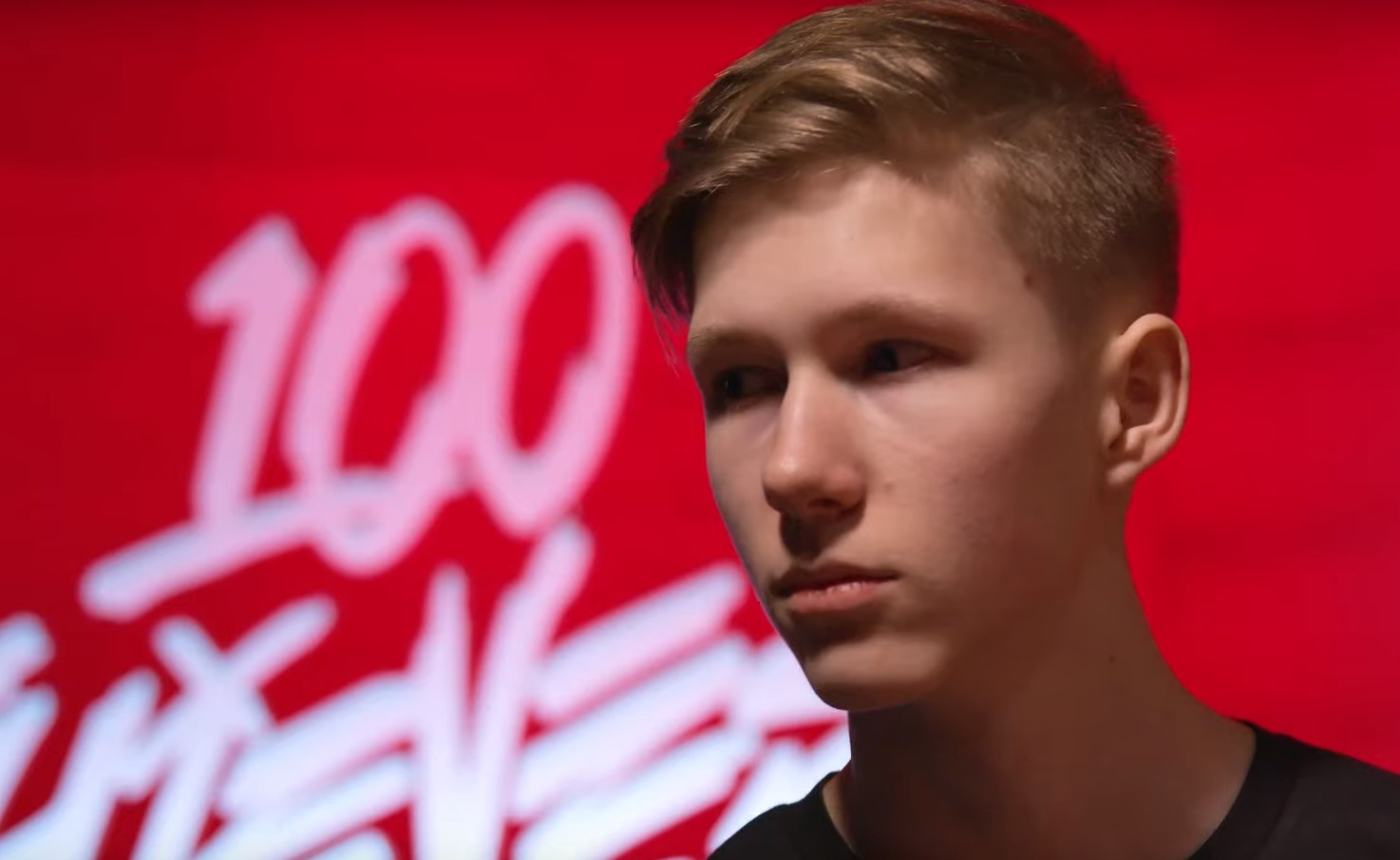 Martin “MrSavage” Foss is a Norweigian Fortnite player representing 100 Thieves.EU. He started streaming on Twitch in 2018 before joining NRG Esports. The relationship only lasted a year, resulting in MrSavage signing with 100 Thieves. MrSavage qualified for the Fortnite World Cup four times throughout his career, and he also won first place at Dreamhack Anaheim 2020.

When he’s not playing professionally, MrSavage is a prominent streamer with over 1.6 million Youtube subscribers and over 2.3 million Twitch followers.

MrSavage uses the Roccat Khan AIMO as his headset of choice. This headset provides ample comfort and performance. This headset features 50-millimeter drivers and virtual 7.1 surround sound that works with a USB connection to the PC. The Khan AIMO also connects to other devices with a 3.5-millimeter jack, but it only supports stereo sound.

Roccat’s Khan AIMO has discrete styling with an all-black design, including the headband, earpads, and earcups. One of the standout style elements is the subdued light strips on the ear cups and headband. The lighting, sound profiles, and other settings are controlled with Roccat’s Swarm software.

Since the Roccat Khan AIMO is no longer available, users can try the Khan Pro instead.

Roccat’s Kone Pro is a right-handed mouse measuring 4.94 inches (125.6mm) long, 2.83 inches (72mm) tall, 1.57 inches (40mm) wide, and weighing 66 grams. It has a standard button eight-button design with prominent resting spots for the ring and pinky fingers. The buttons include the usual left and right clicks with an aluminum scroll wheel in the center. On the mouse’s left side are two large and easy-to-reach buttons.

Performance-wise, the Kone Pro uses fast optical switches instead of the mechanical switches used by most mice. The PixArt PAW3370-based Owl-Eye sensor goes all the way up to 19,000 DPI with a maximum polling rate of 1,000Hz.

The Roccat Vulcan TKL Pro is a compact keyboard with optical switches. Its tenkeyless design removes the number pad for a smaller design that’s easy to transport and saves space. Thanks to its aircraft-grade aluminum top plate, the Vulcan TKL Pro is tough despite its small size.

The Asus ROG Swift 360Hz PG259QN is one of the fastest monitors available, so it’s easy to see why MrSavage uses it for his streams. As one of the few monitors with a 360Hz refresh rate, the PG259QN is ideal for high-speed competitive gaming where every second counts. Both G-Sync and FreeSync are built-in, so the PG259QN works with most graphics cards.

Apart from its speed, the other specs on the PG259QN are average. It has a 24.5-inch in-plane switching (IPS) panel with 1080p resolution. There’s only a DisplayPort 1.4, a single HDMI 2.0 port, three USB-A 3.0 ports, and a 3.5-millimeter audio port when it comes to connectivity. The HDMI port is limited to 240Hz, so the PG259QN only displays 360Hz over the DisplayPort.

The Roccat Sense Vital Force 2mm XXL is big enough to cover an entire desk, and it provides smooth and even surfaces to get the best performance out of the mouse. This mouse pad measures 15.75 inches (400mm) wide, 11 inches (280mm) tall, and 0.08 inches (2mm) thick.

There’s a rubberized coating on the mouse pad. Having a rubberized layer on the back of the mouse pad ensures it stays in place during gaming sessions. All four sides of the Sense Vital Force are stitched for added durability.

MrSavage uses the Logitech Brio Ultra HD for its high-resolution recording. The Brio Ultra HD allows users to record in multiple resolutions like 4K Ultra HD at 30 frames per second (fps) and in full HD 1080p at 30 or 60fps. It can also record up to 90fps at 720p, and it has a five times HD zoom feature.

Apart from streaming, the Brio Ultra HD is also suitable for work-related online meetings. It’s certified by most business apps, including Skype, Google Meet, and Zoom. Like many Logitech webcams, the Brio Ultra HD comes with a foldable clip that’s easy to attach to most monitors and laptops. There’s also a built-in lens shade to give users privacy when they aren’t using the webcam.

Shure’s SM7B Vocal Microphone is a staple of streamers like MrSavage, Benjyfishy, and Nadeshot because of its clarity and build quality. As a cardioid microphone, it only records the sound coming from directly in front of it while blocking out unwanted background noise. Apart from background noise, the Shure SM7B also blocks the hum of electronic equipment like monitors with its electromagnetic shield.

Another selling point of the SM7B is its robust build quality. The exterior is a mix of steel and aluminum with an included shock mount. Shure stocks replacement parts like cartridges, and they also have accessories like windscreens and XLR to USB adapters available to upgrade the microphone.

MrSavage uses the Blue Compass Premium Boom Arm to hold his microphone in place. Boom arms free up space and allow users to move the microphone around and place it in the perfect position to capture their voice. Blue Compass uses a C-clamp to mount on the edge of a desk, and users can buy the desk-insert bushing accessory if they prefer a grommet-style mounting system.

Some of the best features of the Blue Compass are its construction and compatibility. It’s made from aluminum and comes with built-in springs and cable management. Most microphones up to 2.4 pounds can fit on the standard 5/8-inch adapter with an adapter required for microphones with 3/8-inch threading.

Elgato’s Key Light is a simple and effective way to illuminate a stream. Looks-wise, it resembles an LED panel attached to a stand. The bottom attaches to the desk with a C-clamp while the panel lights up the streamer. Users can adjust the height of the stand between 22 and 49-inches and the light’s brightness ranging between 2,900 and 7,000 kelvin.

On the inside, the Key Light contains 160 LEDs with a maximum brightness of 2,800 lumens. Despite containing so many, LED’s the panel has uniform brightness because of its reflective coating on the interior. There are multiple ways to configure the Key Light, including the Control Center app or the Elgato Stream Deck.

Elgato’s Stream Deck XL is designed to make streaming easier by giving streamers one-touch control over their devices and settings. This device features 24 keys in an eight-by-four layout. Each key is an individual LCD with a transparent protective cover. Users can link the keys to apps like Twitch or hardware devices like the Elgato Key Light to have fast access to certain functions.

When the Stream Deck XL is configured, it allows users easy access to their equipment and settings. Users can switch between apps on the fly or have functions like starting an intro, displaying a message, or opening a folder mapped to one button.