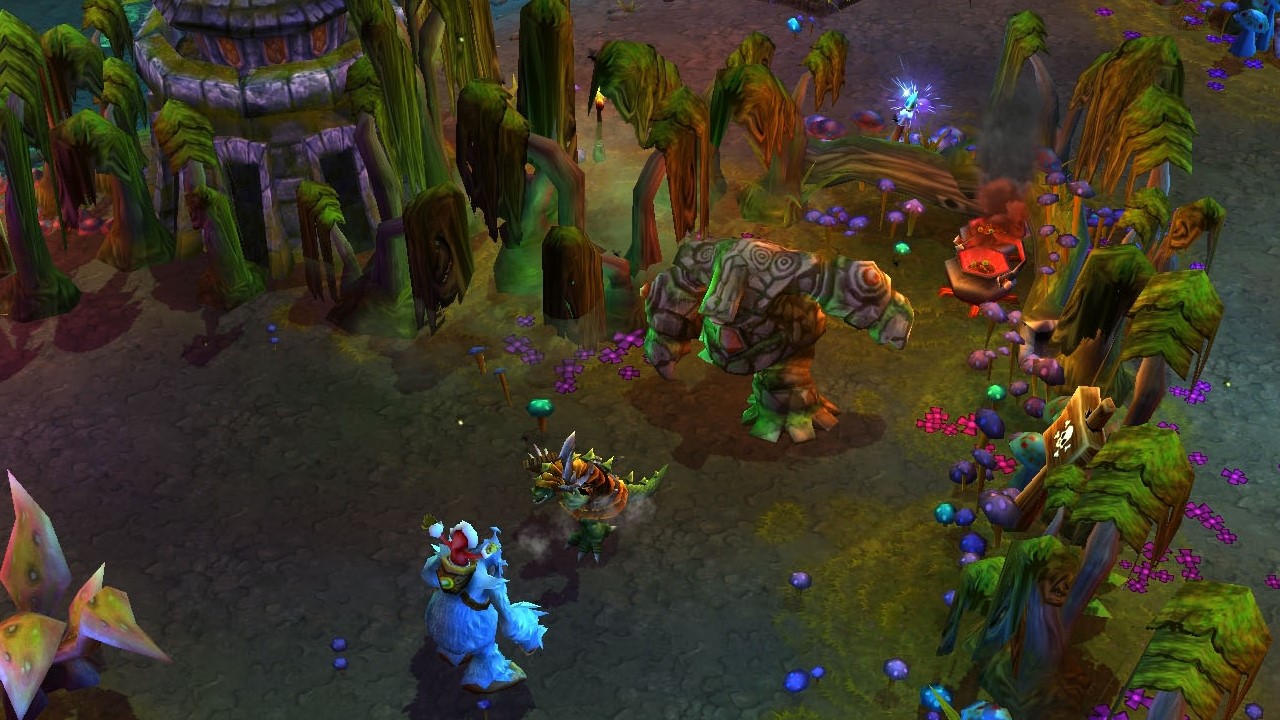 During League of Legends’ alpha stage when the game started taking shape, Riot Games originally added 17 champions to the pool. It’s been 10 years since then and most of those champions have changed quite a bit over time.

League is celebrating its 10th birthday in just a few days. Even though the game is essentially the same, it’s a completely different environment than it was in the alpha stage. Riot hasn’t stopped innovating with new champions and building the game’s complexity, releasing 145 champs. The 17 original champions laid the ground for their development, though.

Here’s a look at the first League champions’ historical timelines and what they were like in 2009.

Alistar’s passive used to be called Trample and it gave him a movement speed boost equivalent to the Ghost summoner spell, also damaging nearby enemies. It later changed to a healing passive, but he also lost his E ability that used to heal him, changing it to an ability similar to his old passive. Headbutt, Alistar’s iconic ability, has been doing the same thing since 2009 and his ultimate hasn’t significantly changed, either.

Annie’s abilities haven’t changed too much since her initial alpha release. She’s remained as one of the champions with a simple kit that anyone can pick up and play. While there have been some changes to damage multipliers, Tibbers’ life span, and cooldowns, her abilities have been the same for the past 10 years. The biggest changes to Annie came in 2012 when Tibbers’ movements became controllable and in 2016 when the bear got attack and movement speed boosts.

Ashe’s passive used to only give her a critical strike based on auto attacks, while her Q, then named Frost Shot, simply modified attacks to slow targets. Her marksman kit has mostly been satisfactory, so it hasn’t received many significant updates but was rather balanced. Volley, for example, fires three more arrows, while Hawkshot doesn’t give Ashe three additional gold for a kill. Even though Ashe is an original unit, a new voice over recently gave her a bit of freshness.

4) Fiddlesticks, the Harbringer of Doom

Throughout the years, most updates to this scarecrow-looking champion were adjustments in damage, mana, cooldowns, and CC durations. In 2016, his passive got updated to grant him movement speed. But other than that, he’s the same old Fiddlesticks whose engaging ultimate and point-and-click CC keep bringing frustration to the Rift. Even though he might not be used as much as he was before due to a lot larger champion pool, he’s still a viable pick, especially as a support. Riot is planning on reworking him next year, giving him more ambushing tools that lead to winning a fight.

Jax has been proudly carrying the light of his homeland for 10 years. Initially, Riot was playing around with his abilities to find a kit that sits naturally under one’s fingers, switching his Q for W and adding more damaging effects, spell shield breaks, and area-of-effect damage reduction. Although Jax’s abilities essentially haven’t changed, Riot has played around with them a lot. Given how simple his playstyle is in the more complex environment of League, he might get a rework soon.

This angel-like judicator used to be quite different than today. With her passive, she used to reduce the resistance of nearby enemies. Her Q didn’t have a dangerous portal and her E allowed her to fire ranged splashing attacks. The core of her ultimate that makes her or an allied champion invulnerable has stayed the same, but in the past, that’s all it was. The ultimate had no offensive abilities like it does with its swords today.

Yi is a champion that requires little to no understanding of his gameplay to be a powerful force. This is likely because he’s practically been the same from the early beginning when League was overall a lot simpler. The most interesting update to Yi is the one where his ultimate was made into what we know today as his Q, but even this happened in the alpha stage. Most of Yi’s changes were, in some way or another, balance updates.

Today, Morgana is a popular support pick. But in the past, she was a dangerous mid laner. Regardless, Morgana has almost never stopped being viable on the Rift. Her ultimate used to stun as soon as it was cast and Dark Binding got changed into a skillshot with the frustratingly long root. She’s received many buffs and nerfs over the years but she’s basically the same Morgana that Riot initially developed. Unlike many other champions on this list, however, Morgana’s playstyle suits League’s modern gameplay.

Nunu and his yeti Willump received a complete rework in the summer of 2018. Instead of Call of the Freljord, their passive used to give Visionary stacks that leveled abilities and gave them mana-free attacks. E and R weren’t snowballs, but icicles that slowed and dealt damage with no roots or shields. Nunu’s Q is the only ability that’s stayed similar to what it once was, but the rework made the champ a lot more fun to play.

If you’re a newer player to League, you might be wondering where the saying “Smash your keyboard and get a pentakill with Ryze” comes from. And the answer is from League’s past. Ryze has been reworked five times. The “head spam” comes from the fact Ryze’s Q used to lower the cooldown of all of his other spells and the ultimate that considerably increased his damage output had no mana cost, allowing players to spam his abilities and deal a lot of mana-based damage.

Sion is another champion on this list that’s undergone a complete rework, even though it happened a while ago. The full relaunch that happened in 2014 gave him a completely new kit. Before he could charge through the map with his ultimate, Sion used to have bonus life steal and an ally heal. Stunning with Q required no channeling and E used to deal more damage at the cost of Sion’s health. Overall, his gameplay used to be a lot simpler, but the rework made him a better champion.

Sivir is one of the original ADCs in League. She hasn’t received any drastic changes since her rework in 2011 when Ricochet started bouncing off and her passive stopped giving her a chance to dodge. After many patch updates, Riot simply made mostly balance adjustments to Sivir, especially in terms of damage. Her abilities did get some features added or removed, but her gameplay has stayed practically the same.

Veteran ADCs will never get over the fact that Soraka can’t share her mana with them anymore. Implementing Infuse as the new E ability in 2014 had a big impact on her gameplay. While Soraka used to be exclusively focused on keeping ADCs’ health and mana high at all times, with renewed skills, poke and zone became an important part of her kit. Soraka’s skills often got polished even before that rework, mostly affecting her healing abilities and mana costs.

The power of the scout’s code wasn’t meant to be underestimated in 2009 or today. Even though he looks like a cute Yordle, Teemo has been one of the most hated champions on the Rift for years. The truth is, he used to be even more powerful. Teemo used to leave a trail that, when followed, would increase allies’ movement speed and give vision. Noxius Traps used to last 10 minutes with no bounty and he even had an ability that gave him sight and increased his range.

Some players are lucky to have Riot Girl Tristana in their skin collection to commemorate Tristana’s long history. The Yordle Gunner used to make enemies eliminated by her auto attacks explode and deal splash damage, and she used to reduce the target’s health regen. For a short while, she could even outrange Baron. Many of her abilities were AP focused as well. Tristana hasn’t really received any significant updates—aside from years of polishing—since her kit was slightly changed in 2015 to add Explosive Charge.

Blue, red, and gold cards have been sticking with Twisted Fate since he was developed in the alpha stage. But the gold card used to stun all enemies in its range, the cards were undodgeable, and his ultimate used to slow enemies down before Twisted Fate teleported in front of their faces. Besides that, he hasn’t seen much of a gameplay difference. Even though he’s more complicated to master, especially when compared to other champions from the alpha, Twisted Fate has almost consistently been a good pick throughout League’s history.

17) Warwick, the Uncaged Wrath of Zaun

Even though Warwick was reworked in 2017, his abilities didn’t change too much from what they were originally. But he’s received more detailed features as the game’s complexity has grown. While his old Q also dealt magic damage that healed Warwick, the spell didn’t include a dash. Blood Hunt, or Blood Scent as it was previously called, only gave him more movement speed without trails or bonuses when enemies are at lower health.