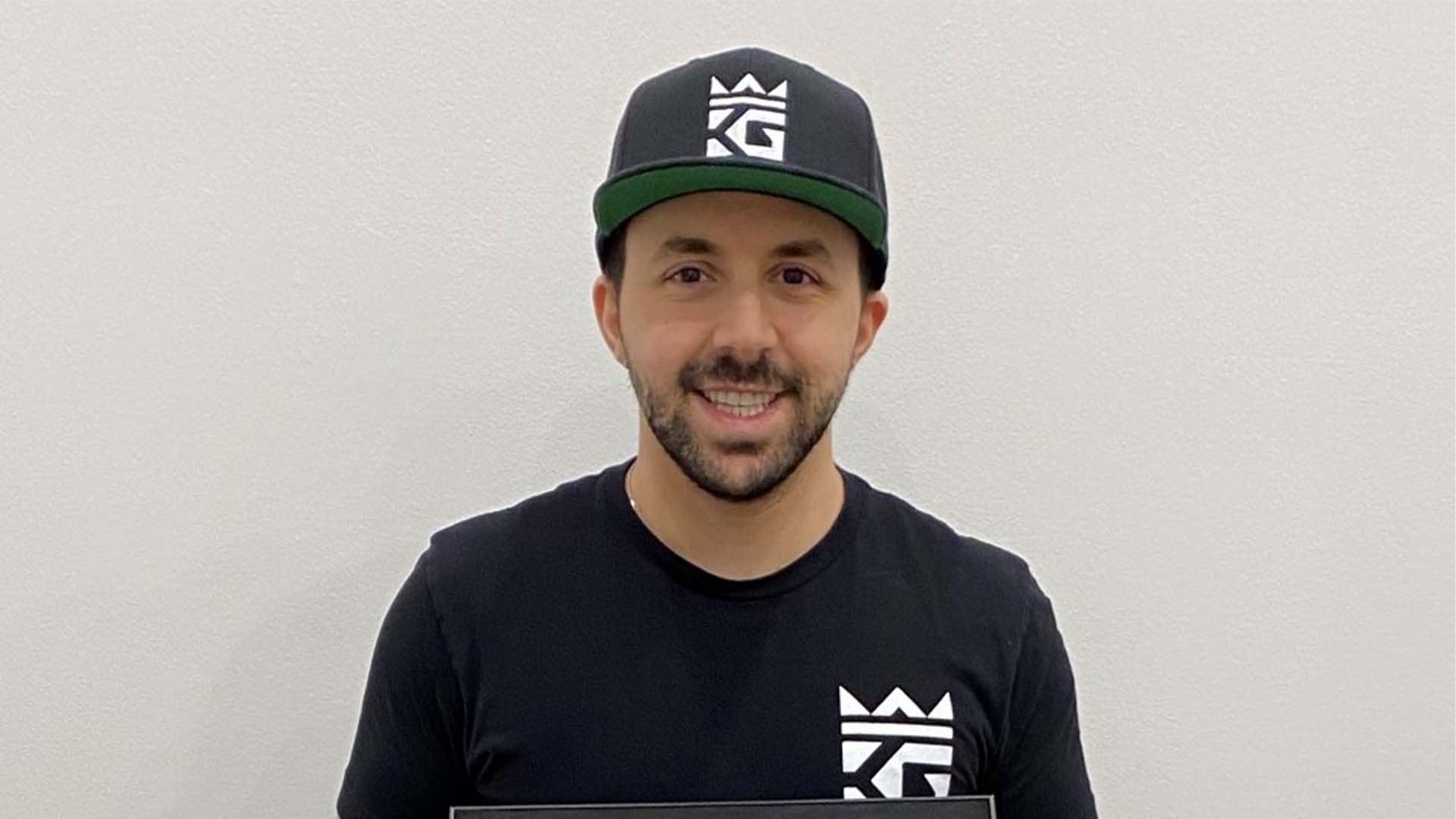 George “KingGeorge” Kassa is a beloved name within the Rainbow Six: Siege community. Active between 2015 and 2018 as a competitive Rainbow Six Siege player, KingGeorge won the inaugural Six Invitational with Continuum.

Since he retired from professional Siege, KingGeorge has transitioned into a full-time content creator on Twitch and YouTube. His Twitch channel has over 937,000 subscribers, and over 357,000 on YouTube.

Other features of the headset include a detachable microphone and a lightweight aluminum frame. The Virtuoso RGB can connect to PCs and consoles through a 3.5-millimeter headphone jack, a USB-C port, or the Slipstream wireless USB dongle.

Continuing with Corsair, KingGeorge uses the wired M55 RGB Pro. This mouse weighs 86 grams and has an ambidextrous design for both hand orientations. It has 50 million click-rated Omron switches and a customizable RGB light. Like the Virtuoso RGB, users can modify its features through iCUE—users can set DPI profiles within the software.

Another Corsair product KingGeorge uses is the K100 RGB mechanical keyboard. The K100 can be sold with either Corsair optical or cherry MX linear key switches—each key of the former illuminates using RGB lighting zones. The backlighting is controlled using the physical iCUE control wheel. Over 200 profiles can be saved in the K100’s on-board memory.

The iCUE wheel can also switch between, and control, applications through iCUE software customization—some functions in games can be programmed to the wheel too. The K100 has programmable macro buttons that users can program through iCUE or Elgato’s Stream Deck software. Profiles for specific games or game genres can be set through the software too.

Rounding out the Corsair products KingGeorge uses is the MM350 Pro. This mousepad comes in a multitude of styles and sizes. Styles include cloth, anti-fray cloth, RGB, and spill-proof. The cloth styles can be three or five millimeters thick, while the RGB versions use soft or hard material—both MM350 RGB Pro versions are controlled through iCUE.

KingGeorge has two display monitors for his streaming setup: a Samsung CRG5 and a BenQ XL2546.

Starting with the Samsung CRG5, this 240Hz gaming monitor comes in either a 27-inch or 24-inch size. Both versions are 1080p resolution monitors that use a 1500R curved screen. Nvidia G-Sync matches the refresh rate of the monitor to the number of frames produced by the GPU for smoother gameplay experiences.

Like most gaming monitors, the CRG5 has dedicated gaming profiles for specific game genres through Picture Mode. These profiles will change the gamma, contrast and sharpness levels of the picture based on the genre. It also has shortcuts, like Virtual Aim Point which adds crosshairs at the center of the monitor. This gaming monitor is the most affordable in Samsung’s line.

KingGeorge’s other monitor, the BenQ XL2546, is another display with a 240Hz refresh rate and a 1080p resolution. Unlike the Samsung CRG5, the XL2546 does not have a curved screen or variable refresh rate support via G-Sync or AMD FreeSync.

However, it does have user profiles like the CRG5 that alter picture quality for specific game genres. Profiles can be switched on the fly with the S-Switch on the base of the monitor. BenQ monitors also use DyAc blur reduction for the clearest images of objects in motion, which is preferred for twitch-response games like Rainbow Six.

The webcam KingGeorge uses for recording and streaming is the Logitech BRIO. Logitech webcams are a favorite among streamers, and the BRIO is among the best available because of its high resolution, high-speed recordings.

It can record and stream in 4K at 30 fps, 1080p at either 30 or 60 fps, and up to 90 fps at 720p. The BRIO also automatically adjusts lighting during streams using RightLight 3 and HDR technology.

The BRIO has three preset field of view angles at 90, 78 or 65 degrees, adding more customization to streaming setups. Though streamers usually have a dedicated microphone for audio recording, Logitech BRIO also has two omnidirectional microphones with noise-canceling.

KingGeorge’s microphone of choice is the Blue Baby Bottle SL. While Blue is most known for its Yeti and Snowball, the Baby Bottle SL offers a unique sound profile for content creators.

Instead of just clear audio, the Baby Bottle SL delivers a warm, classic sound achieved by the custom large-diaphragm cardioid condenser inside of it. It also has physical buttons for a -20db mode and a high-pass filter to reduce rumble sounds.

This microphone uses an XLR connection instead of a USB, compatible with mixers and digital audio interfaces. It also comes with a shock mount.

Because of the XLR connection on the Blue Baby Bottle SL, KingGeorge uses a Focusrite Scarlett 2i2 mixer in his setup. The Scarlett 2i2 connects to the PC using a USB connection.

The third generation Focusrite Scarlett 2i2 can handle up to 24-bit/192KHz signals. Most users will rely on signals of 44KHz, however.

For the brains of his PC, KingGeorge uses an Intel Core i7-9700K processor. This ninth-generation Intel CPU comes with eight cores and threads for up to 4.9GHz processing speed while overclocked.

Though released in 2019, the i7-9700k doesn’t support PCI Express 4.0, meaning it won’t support the faster speeds of the newest GPUs and SSDs. It can’t run the latest games at a stable native 4k resolution with 60 fps, but most titles reach that mark at a super-sampled 4K with DLSS or FSR, depending on the GPU paired with it.

The ninth-generation chips don’t have the same computational speed of later generation CPUs since it uses a 14-nanometer fabrication processor—later Intel processors are faster due to denser and smaller 10-nanometer and 7-nanometer processors. It also doesn’t come with a cooling fan or heatsink, so a third-party purchase will be necessary.

Still one of the best graphics cards on the market, the MSI Gaming GeForce RTX 2080 is the GPU KingGeorge uses in his rig. It comes with three cooling fans and RGB lighting accessories for an attractive and efficient graphics card.

The 2080 can’t handle 4K/60 fps with ray tracing enabled, but it can handle almost anything thrown at it in 1440p and 1080p resolutions. It can also handle VR gaming. Paired with the Intel Core i7-9700K, frame rates can average well above 60 fps in mainstream games like Apex Legends and Fortnite. Those looking for one should expect inflated prices due to the ongoing chip shortage.