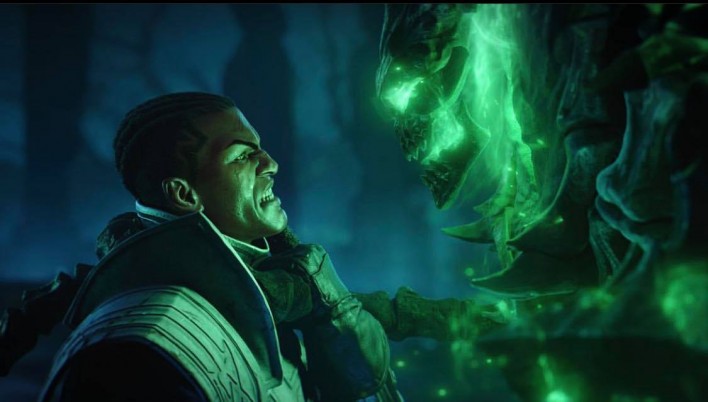 There are a few quests that League of Legends players can trigger by playing specific champions based on their relationship in the lore. A new one is coming to Summoner’s Rift with Senna going live and the quest will pit her against her arch-enemy, Thresh. As Senna’s husband, Lucian will be involved in the quest as well.

Senna and Thresh’s special quest is another highlight of the lore surrounding the Dark Mist. Lucian helped Senna’s soul escape Thresh’s lantern after several painstaking years, and now that she’s back to life, she’s on a mission to free other souls from Thresh’s imprisonment.

Therefore, the new Senna and Tresh interactive quest will be based around the souls and mists of their passive abilities—and who will take them from whom.

The first condition necessary for triggering the quest is, of course, having Senna on one team and Thresh on the other. The quest will appear once Senna has stacked 100 souls, or mist, the drop spawning from Mist Wraiths that Senna kills. Mist Wraiths spawn from champions, minions, and monsters that die close to Senna and stacking them gives her bonus damage, range, and critical strike chance.

Stacking 100 mist isn’t quick and easy, but unlocking the quest will be rewarding. The number of souls Thresh has collected doesn’t matter since only Senna can trigger the quest by hitting 100. The quest details will show up as an icon above players’ ability bars-—hovering over the quest icon gives a pop-up with instructions on what to do to win.

Senna’s quest pops up as the “Sentinels of Light don’t fear the dark” quest, while Thresh’s is named “Oh the eternity we shall spend together.”

Once the quests are activated, it’s time for the fight to start. For Senna to win the quest, the enemy Thresh needs to be killed within three seconds after receiving damage from Senna or, if he’s in the game, her husband Lucian. Once Thresh dies, Senna will consume some of his power.

Thresh will do the same to Senna or Lucian if one of them dies within three seconds of receiving damage from Thresh. While Senna’s light will be releasing Thresh’s soul from the black mist by completing the quest, Thresh will imprison her or Lucian in his lantern.

By collecting souls, Thresh gains bonuses in ability power, armor, and shield strength. When Senna liberates some of the trapped souls by winning the quest, she’ll gain 30 AP and 30 armor.

The new quest will add to the atmosphere of these champions playing against each other on the same map but it’ll also give teams another fun objective they can work on during the game. The winner of the quest will gain an advantage over the other, after all.