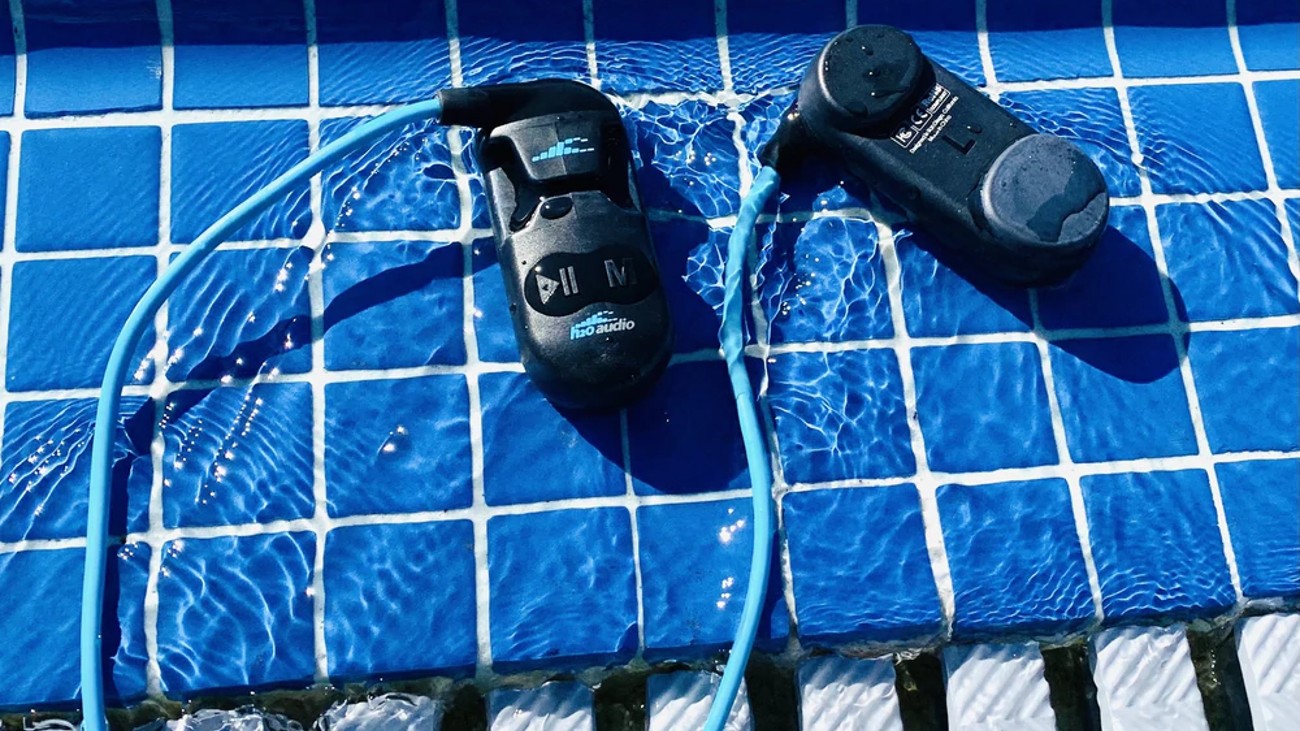 Old wired headsets deliver great sound, but the wireless type have often surpassed them in terms of comfort and practicality. Wireless headsets don’t have any pesky cable getting in the way, and you don’t need to worry about it getting tangled or damaged if it gets pulled by mistake.

Some wireless headphones go a step further by adding waterproofing so they won’t get damaged by sweat or running in the rain. The best waterproof headphones can even be used underwater while swimming without getting damaged.

JBL’s Endurance DIVE headphones work while you’re running or weightlifting, and they perform well while you swim due to their IPX7 rating. The rating means the Endurance DIVE can withstand being submerged in one meter of water for up to 30 minutes, enough for most swimmers.

Another standout feature of the Endurance DIVE is its built-in memory. This headset can connect to mobile phones and tablets via Bluetooth while it’s out of the water but won’t work while submerged. Instead, users can upload songs directly to the 1GB of onboard memory and listen to them directly off the headphones while they swim. The battery has a decent eight-hour lifespan, and it offers around an hour of use with a ten-minute charge.

Unsurprisingly the Endurance DIVE has a durable rubber exterior that isn’t affected by water. It also houses touch controls to manage calls, adjust the volume and skip tracks easily. There are five colors to choose from, including red, yellow, teal, black, and blue so there’s one for everyone’s taste.

The Endurance DIVE has a high water resistance rating, making it ideal for swimming or other outdoor activities. It also has a long battery life and a built-in MP3 player for listening to music underwater. At $98, it’s reasonably priced, but some users might be more comfortable with earbuds that aren’t joined together.

Buyers looking for earbuds can check out the Jabra Elite Active 75t. They offer outstanding comfort and sound quality, but unlike the Endurance DIVE, they can’t work underwater despite their IP57 rating because there’s no onboard memory. The IP57 rating matches the water-resistance level of IPX7 and adds protection against dust, making the Elite Active 75t very durable.

When it comes to sound quality, the Elite Active 75t have active noise canceling to filter out the unwanted sounds around you, and they have four built-in microphones for clear voice sounds. Unlike the Endurance DIVE, they also have smart compatibility and work with Alexa, Siri, and Google Assistant. Buyers can expect around seven hours of battery life and another three charges from the case.

The main difference between the Elite Active 75t and other Jabra models is the rubberized coating that contributes to its dust and waterproofing. Most of the other features like the on-ear controls for controlling the volume and answering calls are carried over from the other models in the range.

The Jabra Elite Active 75t is tough enough to handle water and dust, and it also offers smart connectivity and comes with an intuitive Sound+ app for fine-tuning the settings. On the other hand, its $195 price tag isn’t cheap, especially when functions like noise-cancellation require software updates.

The Bang & Olufsen Beoplay E8 might be up your alley if money’s no object and you’re willing to pay for excellent sound quality and a unique design. Considering their massive price tag, it’s not surprising that the Beoplay E8s can match the Elite Active 75T’s IP57 rating and also handle submersion.

So what do you get for almost three times the price of the Endurance DIVE? The Beoplay E8s have a premium quality feel with a unique ribbed design that won’t be mistaken for anything else out there. It also comes with many accessories, including four sets of silicone tips in different sizes, three sets of ear fins, and a set of foam tips. The carry case also has a classy design with the same ribbed appearance as the earbuds and offers around 30 hours of charging.

Many of the features like the four microphone design and on-ear controls match cheaper options like the Elite Active 75t, but the sound quality is a step up. For a high-end set of earbuds, it’s disappointing that there’s no active noise cancellation, especially when considering the price tag.

There’s’ no doubt that the Beoplay E8 is targeting the top end of the market with its $283.73 pricing. It somewhat justifies it with premium sound and build quality, but is let down by its lack of active noise canceling.

H2O’s Audio Sonar operates differently from the other headphones mentioned so far and uses bone conduction technology instead of traditional speakers for sound. As its name suggests, bone conduction bypasses the outer and inner ear, and transfers sound directly to the skull. One of its key benefits is that users can enjoy their music and still keep their ear canals open to listen to the world around them.

Another benefit of the Audio Sonar is waterproofing. Its IPX8 rating is higher than any of the alternatives mentioned so far and makes it the best for underwater use. The rating indicates that the buds can be submerged to a depth below one meter for 30 minutes and still survive. Since the Audio Sonar is designed for underwater use, it has a built-in MP3 player like the Endurance DIVE, but its storage capacity is much higher at 8GB. Users can also play music underwater via Bluetooth, as long as a compatible smartwatch is attached to their goggles.

Apart from its underwater capabilities, the Audio Sonar has fairly standard features with Bluetooth connectivity and on-ear controls for the volume and skipping tracks. Another small but nifty design feature is a groove to slide the goggle straps through for a tight fit.

The Audio Sonar headphones might be the best for underwater use, but they lack advanced features like smart compatibility and active noise cancellation. For $99.99, they still offer decent value and include 8GB of storage space.

The Pyle Flextreme PSWP6BK are an affordable alternative to the Audio Sonar headphones, and use traditional speakers instead of bone conduction to transmit sound. While its sound delivery mechanism is different, it still has the same IPX8 rating making it practical for swimming and other aquatic activities.

Like the other headsets on this list, the Flextreme PSWP6BK connects via Bluetooth, and it has a long, ten-hour battery life. It includes a built-in MP3 player like the Audio Sonar and Endurance DIVE and has a 4GB capacity to store hundreds of songs.

Its flexible design allows the Flextreme PSWP6BK to adjust to most head shapes, and it comes with a range of ear tips for different uses. There are two sets of water-blocking tips to use when swimming and three sets of regular tips for everyday use.

Pyle’s Flextreme PSWP6BK is a simple and functional set of waterproof headphones. It might not have the most advanced features, but it’s hard to complain, considering its low $47.99 price tag.