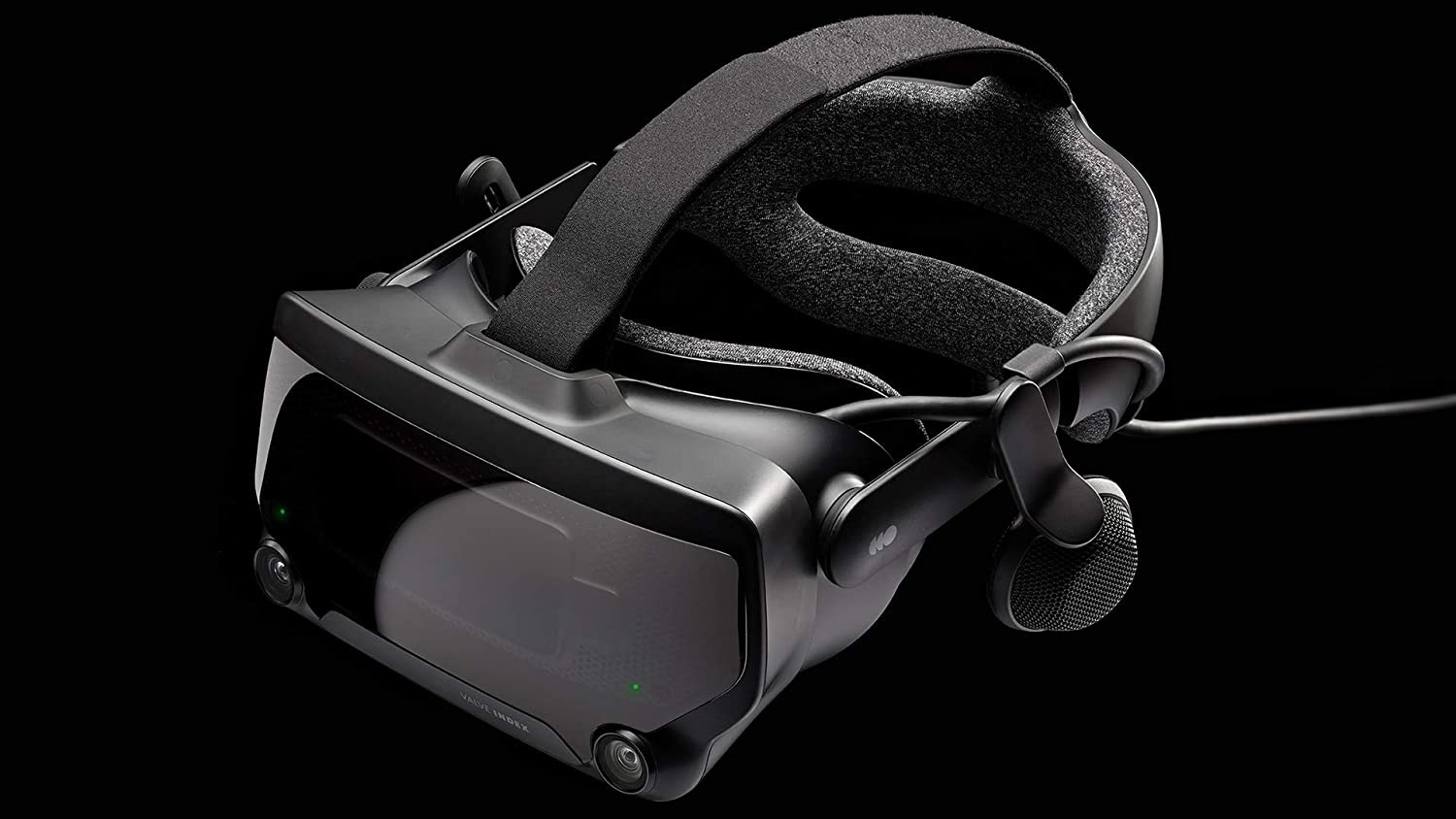 Virtual Reality (VR) headsets are becoming more popular because they offer an immersive experience like no other, and the list of compatible games is constantly growing. Many major titles like Star Wars: Squadrons are built with an emphasis on VR, while other VR-exclusive games like Half-Life: Alyx help push VR further into the spotlight.

There are a couple of reasons why VR hasn’t taken off faster. The main reason is the cost factor. Good VR headsets aren’t cheap, and most of them need a reasonably high-performance PC to run the games. Combining the two costs makes for a stiff barrier to entry.

Here are the best VR headsets for PC.

The Oculus Quest 2 is reasonably priced and can work with or without a PC. Being able to play without an expensive gaming PC makes the Quest 2 more accessible because of the considerable cost savings. Buyers can also get the fiber-optic link cable and download the app to play PC VR titles.

The minimum system requirements of the Quest 2 when using the link cable aren’t too high. It needs an Intel i5-4590 or AMD Ryzen 5 1500X processor. The Quest 2 also needs at least 8GB RAM and either an Nvidia GTX 970 or AMD Radeon 400 Series graphics card. These specs might not be enough for certain games like Medal of Honor: Above and Beyond, which needs an Nvidia GTX 2080 to run smoothly.

Comfort is one of the most important factors when choosing a headset. The Quest 2 has a compact size of only 7.5 by 4.0 by 5.2 inches, and it’s lightweight at just 1.1 pounds. It’s easy to get a comfortable fit by securing the headband with velcro fasteners. Another comfort-focused feature is the adjustable interpupillary distance (IPD). It allows you to move the lenses closer or further apart to match the distance between your eyes.

The Quest 2 has two small speakers built into the strip’s sides, and it also has a 3.5-millimeter jack for headsets.

The controllers are comfortable with two triggers, an analog stick, and two additional buttons. If you don’t want to use the controllers, the Quest 2 has hand tracking capability, but its use is limited to specific games and navigating the menus.

There’s no doubt that Oculus has one of the best VR libraries around. The access to a vast range of games and apps makes the Quest 2 an appealing option for new and returning VR users. The versatility of using it tethered or untethered also makes it a practical and flexible option.

The Valve Index has outstanding performance, but it loses points for practicality. The Index needs external base stations that have to be strategically placed to track your movements. The base stations need to be mounted in elevated positions on opposite sides of the room to get the best performance.

Despite the practicality drawbacks, the Index shines in the performance department. Instead of a fixed refresh rate like the Quest 2, it has an adjustable refresh rate ranging between 80Hz and 144Hz. The resolution of 1440×1600 per eye is less than the Quest 2, but it still looks stunning.

The controllers are also different from the Quest 2. They are strapped to your hand so you can let go of them and still perform in-game movements thanks to the Index’s finger tracking. Each controller has a trigger, an analog stick, two buttons, and a touchpad.

Compared to the Quest 2, the Index is a bit heavier. It weighs 1.78 pounds and has a chunkier shape. Instead of soft straps, it uses padded hard plastic with knobs for adjustment. Just like the Quest 2, it has an adjustable IPD for a better field of view. The Index headset differs from most of its rivals by having two prominent external “ear speakers” instead of smaller headphone style speakers.

Valve’s Index is the company’s first in-house headset, and it easily competes with Oculus alternatives. Unfortunately, it is very pricey and more complicated to set up than the Oculus Quest 2.

The Elite is the latest addition to the HTC Vive Cosmos lineup. The standard Vive Cosmos doesn’t need base stations to operate because of the six cameras that offer inside-out tracking.

The Vive Elite needs a fairly modern PC to run. The recommended PC specs to run the Vive are an Intel i5-4590 or AMD FX8350 processor, 4GB RAM, and a DisplayPort 1.2. HTC’s Vive Elite requires an Nvidia GeForce GTX 1060, an AMD RX480, or higher when it comes to graphics cards. In reality, you won’t get the best performance from these cards and will need something with more oomph.

One of the handy features is the ability to work with a tethered or a wireless connection. To use the Vive Elite wirelessly, you’ll need to get a separate adapter. The wireless adapter eliminates the need for a cable, but it’s quite expensive and needs to recharge after a couple of hours of use.

When it comes to performance, the Vive Elite has a slightly lower resolution than the Valve Index. HTC’s Elite has a resolution of 1440×1700 per eye and a fixed 90Hz refresh rate.

HTC’s newest VR offering also uses the same wand controllers from the older Vive headsets. These controllers have a dual-stage trigger, a huge trackpad, and haptic feedback. The 960mAh battery is decent, but the micro-USB charging feels a bit outdated.

The Vive Elite headset has a modular design compared to the other headsets on this list. The modular design means that it may be possible to upgrade the faceplate when future releases come out. It has a secure fit thanks to the halo straps with adjustment knobs. A nifty feature is the flip-up visor that lets you see what’s going on around you without removing the whole headset.

Instead of external speakers like the Index, the Vive has headphone speakers on each side, and you can connect a headset through the 3.5-millimeter jack.

If you have the older Vive Cosmos, you can upgrade to the Elite without buying a completely new headset. The controllers and base stations can also be used interchangeably and are compatible with the Valve Index.

There are a couple of downsides to the HTC Vive Elite. It can be inconvenient to set up because you have to place the base stations in an elevated position to track your movements. There’s also no HDMI compatibility, so you have to have a DisplayPort to make it work. Whether you’re upgrading from a standard Vive Cosmos or buying a complete Elite, it’s a pricey investment.

The HP Reverb G2 has the highest resolution of any current gaming VR headset. The 2160×2160 resolution is better than the other headsets on this list, but the 90Hz refresh rate is similar to the HTC Vive Elite and Quest 2.

The basic system requirements of the Reverb are fairly modest, considering the higher resolution.  HP’s Reverb G2 needs an Intel i5 or AMD Ryzen 5 processor and 8GB RAM. An Nvidia GTX 1060 or AMD Radeon RX580 can run it at half resolution, but you need at least a GTX 1080 or Radeon RX  5700 to get the full resolution.

One of the best things about the Reverb G2 is that it doesn’t need any base stations to work.  The headset uses built-in cameras to track movement, making it much easier to set up while reducing costs. The inside-out tracking works well with most games, but it isn’t as accurate as the Valve Index or Vive Cosmos Elite.

The Reverb G2 is lightweight and comfortable. The headset weighs just 1.2 pounds and has velcro straps that are easy to adjust. There’s also ample padding and a flip-up feature. Since the Reverb G2 was developed in conjunction with Valve, it uses the same speakers as the Index, and the controllers are interchangeable.

If you don’t have Valve Index controllers, the standard ones are good enough. Each controller has a trigger and an analog stick. The left controller has an X and Y button, and the right controller has an A and B button. One of the downsides of using light tracking is that the controllers have a short battery life of only four to eight hours. The controllers use two AA batteries each, and it may be worth getting rechargeable battery packs to save money in the long run.

The HP Reverb has a lot going for it. It’s well-priced and has outstanding picture quality. It’s also easy to setup. The only disadvantages are that it doesn’t have the best tracking accuracy, and the controllers’ battery life is weak.