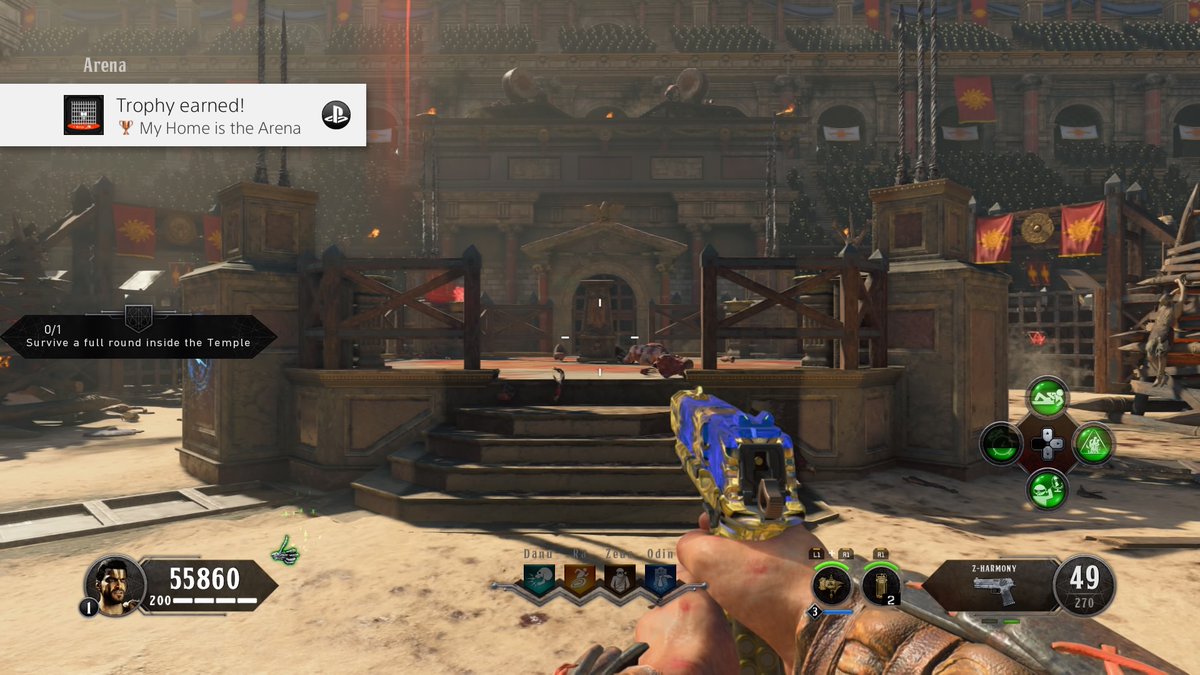 IX is one of the most fun Zombies maps in Call of Duty: Black Ops 4, but it can get a little boring and repetitive at times, especially in the later levels.

If you're a Zombies player who's looking for a bit of a challenge, you should try to unlock the "My Home is the Arena" trophy or achievement. All you have to do is survive to round 20 without opening a gate on IX—sounds easy enough, right?

But what does this mean and what's the easiest way to complete this task? Here are some of the best tips and tricks we have to help you unlock the "My Home is the Arena" trophy.

To unlock this trophy, you'll have to survive in solely the spawn area until round 20 without opening any doors. In order to do this, you're going to want to build a specific create-a-class to give you the best opportunity to succeed.

We strongly recommend waiting to attempt this challenge until you've leveled up at least a little bit in Zombies. As you level up in the game mode, you'll unlock more weapons and equipment that can be vital to your survival.

The perks you equip in this create-a-class don't really matter—you won't be able to buy any of them in the first 20 rounds since you can't open any doors. Instead, focus on selecting the most advantageous elixirs, equipment, and start weapon.

We recommend the Dead of Nuclear Winter and Kill Joy elixirs, which will help you spawn in a Nuke or Instakill power-up whenever you want. If you pair that with the Temporal Gift elixir, you can make your Instakills last even longer. The Burned Out elixir can also be useful to help protect you from melee damage if you get trapped in a corner or stuck in a tricky situation.

The Wraith Fire equipment is definitely your best bet for this challenge because it allows you to throw a device that burns zombies, but doesn't burn you. Round out your class with a strong starting gun, like the Saug 9mm, to give yourself an advantage in the early game.

The first thing you'll want to do when you spawn into your game of IX is to complete the challenges to get a free Pack-a-Punched pistol. There are four banners along the circumference of the arena. You'll need to knife one of the ropes to drop a banner and unlock a set of challenges.

The challenges are pretty easy. Once you complete one, just go to the altar and claim your prize. After you get your prize, you'll receive another new task. If you complete three challenges, you'll be awarded a free Pack-a-Punched Strife pistol.

This pistol will be your main gun when trying to unlock this trophy, since you can't open up any doors and get a different gun. There's also conveniently a spot to buy upgraded ammunition on the outside of the altar, so don't be afraid to use all of this pistol's ammo—you're going to have a ton of points and nothing else to spend them on.

Another item that will be essential to your survival is your special weapon. It doesn't matter which one you pick, but you'll definitely want to use it as much as possible because it's very powerful. We recommend especially using your special weapon during the rounds where fire is coming out of the ground—you won't have as much room to run around, so this strategy will help you get through the round more quickly.

It's also important to remember that you won't be able to craft the shield when going for this trophy, so your back will always be exposed. Trust us, it's not easy to play without a shield if you're so used to having one.

On paper, this trophy seems pretty easy to unlock. But it'll likely take you a few attempts to get it—especially if you're unlucky and one of your challenges asks you to slide under a Blade Trap, which you obviously can't do since you can't open any doors. If you get the Blade Trap challenge, you'll need to quit your game and restart.

With a strong starting class and good in-game mechanics, you should be able to add "My Home is the Arena" to your trophy case in no time.