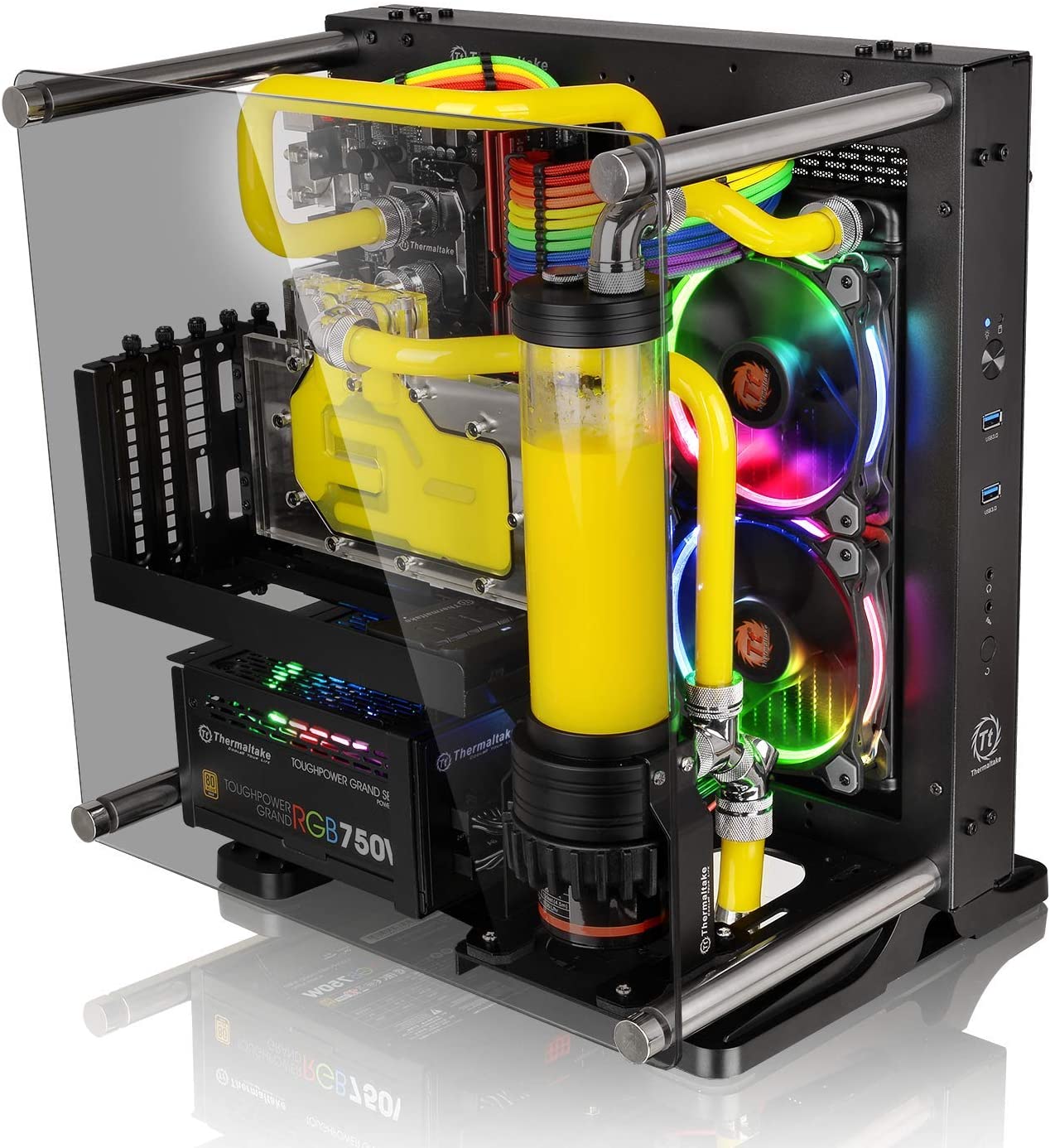 If you want to build a gaming rig, you’ll need a case with optimal space and airflow to ensure the best performance from all your components.

Since gaming PCs get hot while playing demanding titles like Call of Duty or Apex Legends, cooling features are essential. Most modern cases come with some built-in fans and space to add more. No matter how many fans you have, they won’t work well unless they have proper ventilation and airflow.

Airflow regarding PC cases means hot air gets expelled by the exhaust fans and replaced by cool air from the intake fans. Airflow-focused computer cases typically have mesh panels to allow the air to flow freely.

We’ve made a list of some of the best PC cases for airflow that stay cool no matter what you’re playing.

The Cooler Master H500M is an ATX mid-tower case with excellent ventilation. It’s seen significant upgrades since it first came out and now has a removable PSU shroud and better cable management. It’s easy to build in this case, thanks to the spacious design and removable panels that add a level of modularity. The future-proofed front panel is equipped with a USB-C port, four USB 3.0 ports, audio jacks, and an optional addressable RGB controller.

This Cooler Master case is loaded with two eye-catching 200mm RGB fans running at 800 RPM on the front and a 140mm fan running at 1,200 RPM at the rear. There’s also support for an additional six fans and enough space for a 360mm radiator. Cooler Master provides a tempered glass front cover and a mesh front cover so you can prioritize looks or airflow.

The Corsair iCUE 220T Airflow is around half the Cooler Master H500M’s price, but it still has impressive cooling features and a fantastic look. It distinguishes itself from the regular 220T by swapping out the tempered glass front panel for a steel one that’s ventilated and has a filter. The front panel also has an unusual pattern that stands out and highlights the RGB lighting. Behind the front panel are three RGB fans with eight LEDs each. The LEDs are controlled by the iCUE app and can sync with your mouse, headset, or other devices.

The 220T Airflow also has a large, tempered glass window on the side and a panel to cover your PSU. There’s room for four 140mm fans, six 120mm fans, or a 360mm radiator. This case isn’t very spacious, so it’s advisable to measure your PSU, graphics card, and other larger components before buying it.

The Thermaltake Core P1 is a worthy choice if you want a Mini ITX case with the best airflow possible. There’s no way for hot air to get trapped inside because of the open-frame design. Instead, there’s constant air circulation from all directions to keep your PC cool at all times. If you need a bigger case in the same style, you can also opt for the P3 or P5 in the same range.

This case can be challenging to use if you’re a beginner since you have to assemble it before adding your components. Experienced builders will appreciate the modular design with separate panels, racks, and brackets that can be put together in a vertical, horizontal, or wall-mount configuration. There are no built-in fans or RGB lighting, but you get two front-facing USB 3.0 ports and the audio jacks. The Core P1 has outstanding airflow, but you’ll have to watch out for dust getting inside.

The Corsair Crystal 280X Micro-ATX has a more conventional shape but still has excellent airflow. This case features Corsair’s Direct Airflow Path Cooling system, which uses a dual-chamber design to optimize airflow. One chamber houses your drives and power supply, while the other has the components that require cooling like the motherboard, CPU, memory, and graphics card. This case is vented at the top to expel hot air, and there are dust filters all around.

The Crystal 280X Micro-ATX also comes with two Corsair LL120 RGB fans on the front panel. There is also space for an additional six 120mm cooling fans and a radiator. This case is perfect if you want a small build with outstanding airflow.

The Mesetex Phantom is reasonably-priced and has quality airflow. This gaming case comes with a whopping six preinstalled fans and vents on the top, rear, and bottom. There are three 120mm fans on the front, two at the top, and one on the back. They all have RGB lighting, and you can control the various color modes using a button or the supplied wireless remote control. You can even set the lighting to correspond to the sounds of your game or your music.

This case is massive and has enough space for all your components with two 3.5-inch drive bays, three 2.5-inch drive bays, and seven expansion slots. The front panel has two USB 2.0 ports, two USB 3.0 ports, and audio jacks. It also has the power, reset, and RGB buttons, but no USB-C support. The Mesetex Phantom is superb if you want a case with many preinstalled fans.

The Master Box Q300L TUF Gaming Alliance Edition is one of the best airflow cases if you have a limited budget. The reason for the outstanding airflow is the open design with ample ventilation. The whole front face has ventilation holes, as does the top and bottom. It also has magnetic dust filters all-around to keep internals clean and prevent damage.

This case has space for two 120mm or 140mm fans at the top and a 120mm fan on the rear. You can also add a 240mm radiator if you like. The Master Box Q300L TUF Gaming Alliance Edition has a relatively subtle black box shape, but the left panel is made from tempered glass to show off your build. You can also place it vertically or horizontally and move the I/O panel accordingly.

The Corsair 275R is explicitly designed for airflow. This case also comes in full black, with stylish slats on the front to allow better intake. The top is also ventilated, and the case comes with three removable dust covers. You also get three preinstalled 120mm fans, two in the front and one in the rear. None of them feature RGB lighting, but you can always upgrade them in the future.

This case has room for an additional six 120mm fans and a 360mm radiator. You can also fit either two 3.5-inch HDDs or four 2.5-inch SSDs. If you’re using other Corsair components, you can also use the Corsair Commander Pro to link them together. The Corsair 275R is very affordable but lacks a USB-C port and RGB lighting. It still has excellent airflow and offers great value.