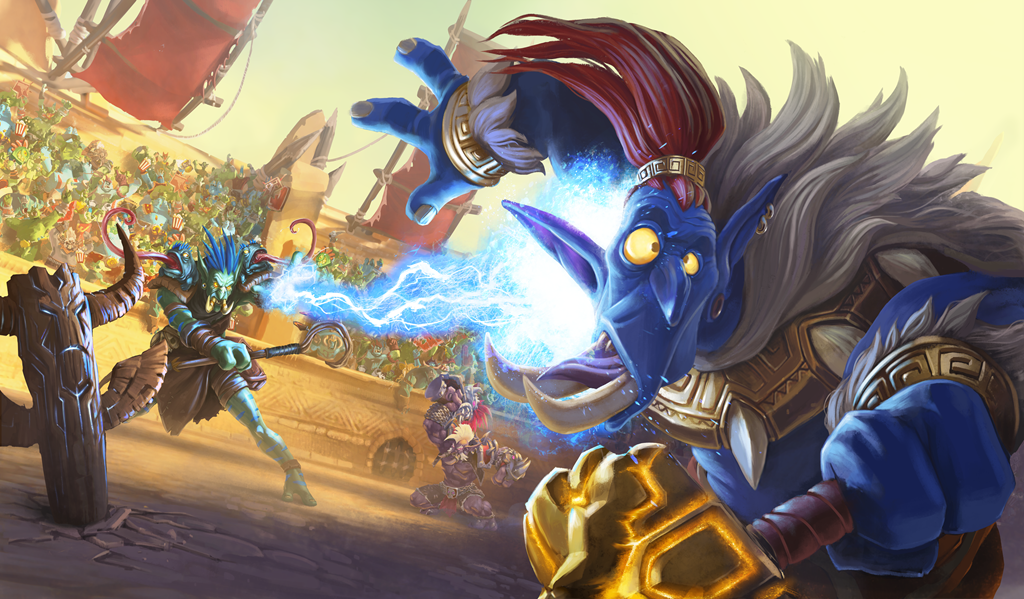 Grab some marshmallows and come take a seat by the fire, it’s new Hearthstone expansion time, ladies and gents.

With the launch of Rhastakhan’s Rumble, we can expect the meta to change rapidly and frequently until the top players have time to figure out exactly which decks deserve to be called dominant. Though we’re only slightly over a week into Rhastakhan’s Rumble, there are already a few decks that seem to be pulling ahead of the pack. The list for these decks will likely undergo heavy transformation in the coming weeks. Keep this in mind when deciding how to spend your dust.

Hunter players are undoubtedly having a fantastic time on ladder this week. While most classes only have one strong deck archetype that seems to have true staying power, Hunter players may have already discovered two.

Spellhunter is very similar to its previous iteration and is probably the most affordable Hunter deck for that reason. The primary addition to the deck is Zul’Jin, a 10-cost hero card with a battlecry that recasts every spell you’ve played so far. Imagine this deck being the spellhunter you’re used to playing, but multiply that by two.

The other Hunter deck making a splash on ladder is Recruit Hunter. This deck is similar to Spell Hunter to an extent because your goal in the early game is to survive by forcing your opponent to answer your secrets, but it’s late game is more minion based. You’ll still be running Zul’Jin for some extra staying power, but you’ll also be using a few more new cards, including the dinosaur beast Oondasta.

This brand new-dino is a nine-mana cost 7/7 with rush and overkill that allows you to summon a beast from your hand. The idea here is you drop Oondasta for nine and then use his ability to summon another high-cost, heavy hitting beast. If you’re lucky, that beast will be King Krush, a nine-cost 8/8 with charge. Two massive dinosaurs on one turn are sure to make trouble for your opponent no matter what deck they’re playing.

It will come as no surprise to many players that Da Undatakah has found a home in Taunt Druid. With high value Deathrattle cards like Hadronox, many speculated Undatakah would find a place in druid when the card was initially revealed.

David “Dog” Caero took Undatakah Druid to Rank one legend this week, and since then it’s starting seeing more and more play on ladder.

The basis of Undatakah Druid is very similar to Taunt Druid and it could be considered a Taunt Druid deck at its core. With Taunt Druid, you want to amass as many strong Taunt minions throughout the game as possible, and then re-summon them using Hadronox.

Hadronox is a nine cost 3/7 who’s Deathrattle summons all your Taunt Minions that died this game. The deck also includes Astral Tiger, a four cost 3/5 with a Deathrattle that causes you to shuffle a copy of it into your deck.

When you combine both of these cards with Da Undatakah, you get an infinite loop of taunt minions. Da Undatakah has a Battlecry that cause it to gain the Deathrattle effects of three friendly minions that died earlier in the game. This means you’ll constantly be shuffling a copy of Da Undatakah into your deck and re-summoning all of your taunt minions anytime Da Undatakah dies.

If you spent the first few days of the expansion watching any Hearthstone on Twitch, you’ve probably seen your favorite streamer playing against Odd Mage over and over again. The deck is very good at doing damage and controlling the board. Plus, most Mage players probably already have a good amount of the cards needed to make it, as it primarily focuses on board control until its ready to pop off.

Since this is Odd Mage, you’ll be running Baku The Mooneater, a card most players will be familiar with from this past metas Odd Paladin domination. As long as your deck only has odd cost cards, Baku buffs your hero power at the start of the game. For Mage, Baku makes your hero power deal one extra damage.

The primary new card that has made this deck so powerful is the mage Legendary Jan’alai, the Dragonhawk. Its battlecry allows you to summon Ragnaros the Firelord, provided you dealt eight damage with your hero power this game. Combine that with the buff you receive from Baku and you’ve got a recipe for devastation.

Ragnaros the Firelord can’t attack, but he deals a whopping eight damage to a random enemy each turn, making it easy to chunk your opponent’s health to zero once you’ve cleared their board. Expect to see various iterations of Odd Mage playing these core cards for a good while.

If you prefer to play Hearthstone from the shadows and surprise your opponent with stabby dagger attacks, look no further than the new iteration of Kingsbane Rogue. This is another deck that was already pretty strong and received quite a boost from RastaKhan’s Rumble.

Raiding Party is a new rogue spell that allows you to draw 2 pirates from your deck, and if you play it as a combo you also get to draw a weapon. Pair this with cards like the new Rogue Legendary Captain Hooktusk and you can see why players have decided to combine the weapon and pirate playstyles.

Captain Hooktusk is an eight cost 6/3 with a battlecry that summons three pirates from your deck and gives them rush. The deck is littered with Pirates like Cutthroat Buccaneer and Sharkfin Fan that affect your weapon, making your heroes attacks more difficult to deal with. Throw in a classic pirate mainstay like Southsea Captain and you’ll have a hearty crew that even Jack Sparrow would be afraid to bargain with.

The king of rush down remains strong during week one of the expansion, and unfortunately it doesn’t even boast any new cards. Anyone who played Hearthstone on ranked ladder over the past 6 months knows the dominating year that Odd Paladin had.

The play style for this deck is pretty simple. You want to amass a board full of Silver Hand Recruits and then buff them using cards like Level Up to smash your opponent in the face.

Level Up gives your Silver Hand Recruits +2+2 and you’ll more than likely have a board full of them. The sad truth is most decks just don’t have enough board clear to take care of the constant onslaught of minions Odd Paladin can produce.

Octavian “Kripparrian” Morosan, arguably the most popular Hearthstone content creator, claimed in a video that Odd Paladin is still the best deck in the game at this point in the meta.

While Odd Paladin isn’t generally regarded as fun to play, its currently a great option for players who haven’t been able to get their hands on many Rastakhan Rumble packs.

It’s important to keep in mind that we are still very early in this expansion. If you’re not a fan of any of the classes listed above, then don’t despair. Odds are within the coming weeks, more synergies will be discovered for each class and we’ll begin to see the true meta shape as the top decks begin to pull ahead.

That new shiny legendary can be very tempting to craft, but you’d hate to craft it only to find out the deck you’re using it in is useless a month later. The great thing about Hearthstone is the ability it gives players experiment with countless combinations and playstyles. Give the meta a bit more time to shape up, and I’m certain you’ll find a playstyle that’s worth your while, regardless of what class you choose to play.

For some ideas about the decks mentioned above, check out Hearthpwn, where players are constantly uploading new decks and theory crafting with each other.