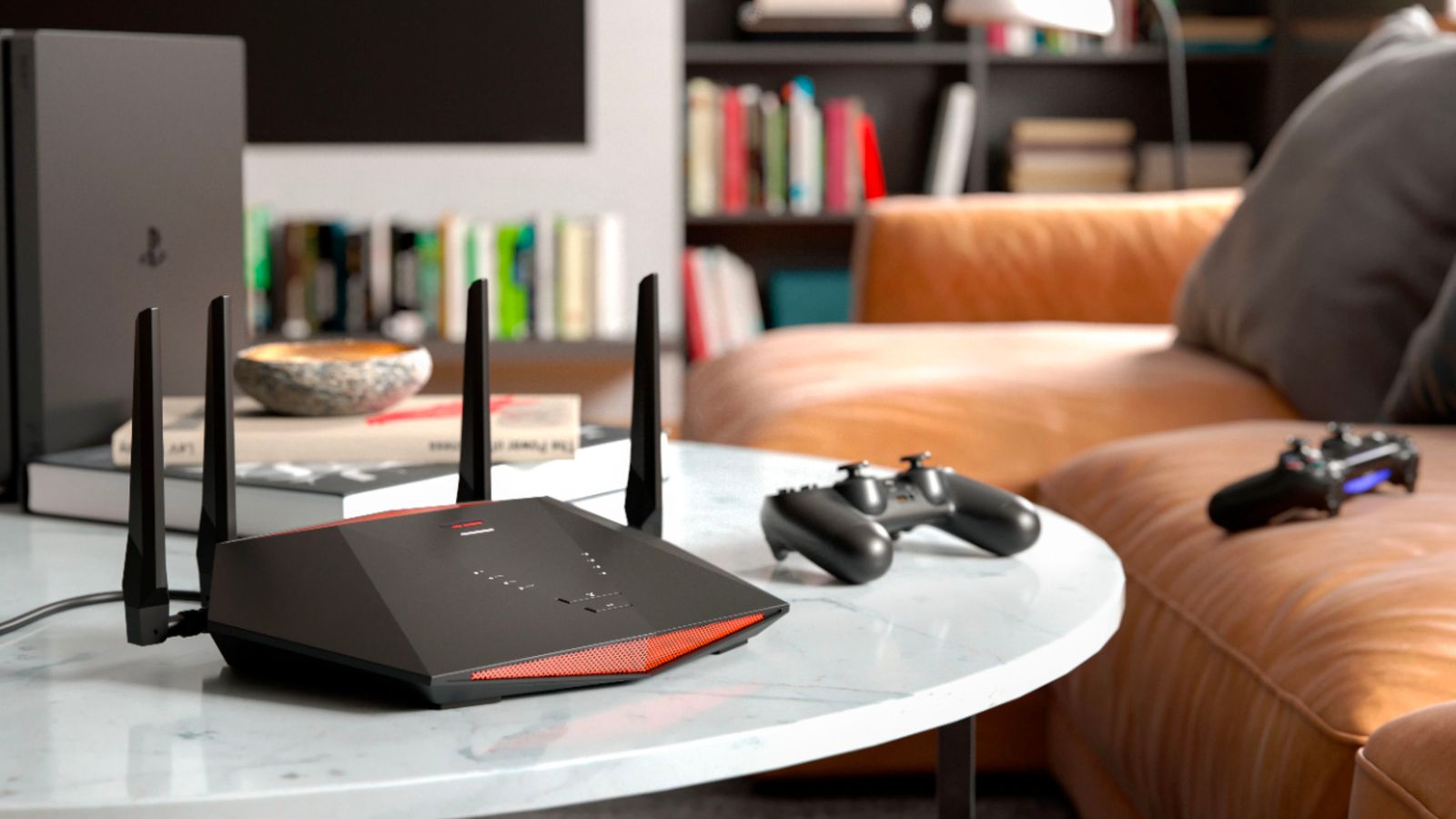 You can have the greatest CPU and GPU in the market, but if your router is poorly managed or not capable of prioritising game traffic properly, the best hardware won’t save you.

A good gaming router is an essential part of any setup. Along with having support for the latest ethernet and Wi-Fi standards, good gaming routers also come with advanced, automated quality of life features to ensure a Netflix or random YouTube video doesn’t take priority over your response times.

The latest gaming routers also have the bandwidth to support several devices at once, with features like beamforming and MU-MIMO. They’ll also have support for high-speed cable and optic fibre connections.

TP-Link’s AX6000 (GX90) is an all-around performer with comprehensive coverage and fast Wi-Fi 6 speeds. It also has built-in features like the Game Accelerator to optimize connectivity and reduce lag.

One of the more polarizing aspects of this router is its design. It’s huge and has eight antennas which give it a cyberspider-like appearance. The antennas are functional, though, boosting the GX90’s coverage by letting it process eight data streams simultaneously. The back of the router has three Gigabit LAN ports and a single 2.5Gbps WAN port. There are also two USB ports for network storage devices.

At around $249,99, the GX90 is reasonably-priced and offers blistering wired and wireless connections. It’s also compatible with GeForce Now so that users can stream games directly to their TV with it.

The new Wi-Fi 6E standard promises faster speeds than ever because it opens up the 6GHz wireless band with more channels for data transfer. Asus’ ROG Rapture GT-AXE11000 is one of the first compatible gaming routers to adopt the new, fastest standard.

Older devices can still connect on the usual 5GHz and 2.4GHz bands, while newer Wi-Fi 6 E-enabled devices link through the 6GHz channel. On this router, the 2.4GHz band goes up to 1,148 Mbps, while the 5GHz and 6GHz bands top out at 4,804 Mbps.

The GT-AXE11000 is similar to the GX90 aesthetically with a bulky flat shape and eight antennas. It also emulates the GX90 with four Gigabit Ethernet ports and a single 2.5Gbps WAN port. The RGB logo on the top is more function than form and can be configured to indicate the network traffic of CPU load.

There’s no doubt about the GT-AXE11000’s speed, but there aren’t many compatible Wi-Fi cards to get the best out of it. It’s still worth its hefty asking price of around $579.99 for die-hard gamers who want a degree of future-proofing. Casual players are better off with a more affordable option like the GX90.

For those who need the best possible Wi-Fi coverage, mesh routers are the way to go. AmpliFi’s Gamer’s Edition includes a router and a pair of nodes to boost the signal. The router itself has a massive range of around 10,000 square feet, and each node adds another 5,000 for total coverage of 20,00 square feet. Users can also purchase additional nodes separately to extend the range even further.

Extensive coverage comes with its drawbacks, and the speed of the Gamer’s Edition can’t match the GT-AXE11000 or GX90. It’s only a dual-band router, with the 5GHz band reaching 1,300 Mbps, and the 2.4GHz band tops out at 450 Mbps. There’s also no MI-MIMO or beamforming, so Wi-Fi performance won’t be as consistent or as fast as some of the other routers.

All three parts of the Gamer’s Edition have a sleek, all-black design. The router is a square box with a 1.6-inch touch screen that displays the date and time and shows upload and download speeds. The rear includes four Gigabyte LAN ports, a WAN port, and a single USB port. Both nodes can swivel up to 270 degrees with five LEDs to show the signal strength.

This router is ideal for users with larger homes who need the widest coverage possible. At a massive $539.27, it isn’t worth it for buyers who won’t use it to its full potential.

Users looking for more LAN ports can check out TP-Link’s AX6000. Instead of four Gigabit LAN ports like all the other routers on this list, it doubles it to eight and has a separate 2.5 G WAN port.

TP-Link’s AX6000 has the same eight-antenna design as the GT-AXE11000 and GX90, but it has a more subdued design without bright colors or flashy lighting. Apart from the previously-mentioned ethernet ports, it also has a USB-A 3.0 port and a USB-C 3.0 port to connect storage devices.

Buyers can’t have it all and have to make sacrifices when buying the AX6000. They get more LAN ports than most gaming routers, but it comes at the cost of having dual-band wireless capability, instead of tri-band, like the GT-AXE11000 and GX90. At around $266.71, this jack-of-all-trades router is still one of the best options for users who prefer the stability of wired connections.

The Asus AC2900 is a more affordable option for the budget conscious, but it still has decent speeds and many software optimizations.

Considering its affordable pricing, it comes as no surprise that the AC2900 has a fairly run-of-the-mill black-box design with only two red accents to make it stand out. It still has acceptable functionality with four Gigabit LAN ports, a 2.5Gbps WAN port, and a single USB-A port.

It’s not the fastest or the most feature packed, but it does still come with built-in AiProtection network security and Asus’ intuitive QoS software. For its $169.99 price tag, the AC2900 punches well above its weight and is especially worthwhile for those living in smaller homes or apartments where Wi-Fi range isn’t a concern.

ASUS ROG Rapture GT-AC5300 – This router is an alternative to the AX6000 if you’re looking for eight LAN ports. At $299.99, it’s more expensive, but it has tri-band capability and other gamer-friendly features to make it a worthwhile option.

TP-Link AX3000 (Archer AX50) – TP Link’s Archer AX5 won’t win any competitions for speed, but it’s hard to beat at $109.99. It offers decent download speeds on its single 2.4GHz and 5GHz channels and comes with beamforming, OFDMA and MU-MIMO technology.