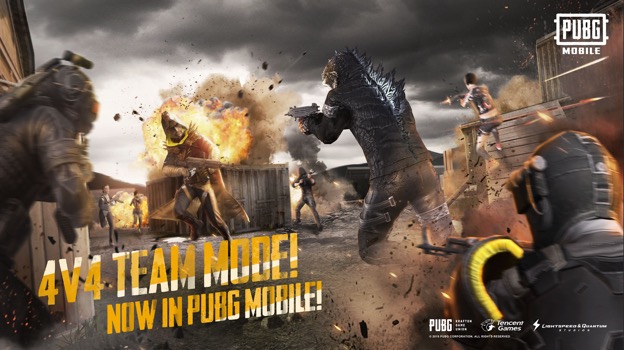 The much-awaited PUBG Mobile 0.13.0 update just dropped—and it’s one of the biggest updates the game has received since it came out last year.

The highlight of the update is the new game mode Team Deathmatch. The mode pits two teams of four players against each other with the first team to reach 40 kills winning the game.

A new game mode hasn’t been seen in PUBG Mobile since the Resident Evil 2 collaboration in February 2019.

In addition to the Team Deathmatch mode, the update has introduced many new features and changed a lot. The complete patch notes for the update can be found here.

The update has brought a completely new Godzilla-themed lobby background and will also include many Godzilla themed events in the near future.

The Vikendi map is also receiving a change as players will now leave footprints, trails, and tire tracks on the snow. This will definitely affect the way high-ranked players play on the map.

The MVP showcase after matches is another highlight of the update. Upon the completion of a match, the MVP in classic and team deathmatch modes will now be featured in a post-match screen with a default pose. More poses will most probably be added as a cosmetic in the future.

Along with a lot of bug fixes, the update has also brought changes to the Survive till Dawn and Darkest Night modes (zombie modes) in the game. The old zombies have been replaced by four types of new zombies. They’ll get some new abilities as well such as the “Tanks” being able to empower nearby allies while the “Skinners” will slow down nearby players. The police station in the zombie modes has been replaced by a new factory.

Meanwhile, a new dedicated button for climbing will prevent players from accidentally climbing over walls when they are just trying to jump to get a view of the other side.

Another change: Sniper Training and War Mode will now run on Mondays and Wednesdays. The Mini Zone and Quick Match will be open on Tuesdays and Thursdays. All arcades modes will be playable on Fridays to Sundays.

PUBG Mobile has announced a new milestone with the update: The game has crossed 400 million downloads and now boasts 50 million daily active users outside of China. Since its release on March 2019, the game has quickly grown to cement itself as one of the world’s most popular games.